The best new music for kids and families: 6 of our favorite fall picks 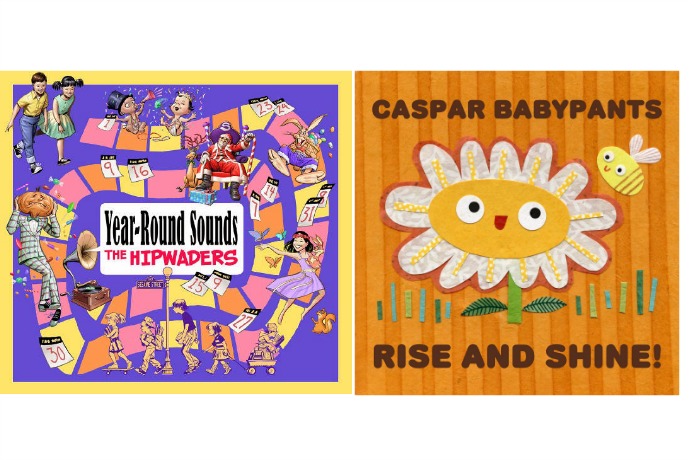 Whether you’re like me and need some holiday gift ideas for the little ones on your list or you just want some new music for kids to dance away the winter chill, I’ve found six recently released kids’ albums that will keep any ears happy. With new music from such CMP favorites as The Pop Ups and Caspar Babypants, as well as a wonderful collection of Latin American tunes for kids, there’s a little something for everyone–including we parents who will be listening along.

The Pop Ups’ Fids and Kamily pick, Appetite for Construction, kicks off with the Prince-era sounds of “Getting the Job Done”,  a multi-layered electronic-filled feast that will satisfy anyone who likes an insta-dance party. The dozen songs on this album are primarily focused on the act of creating, whether that be raiding the closet for a “Costume Party” (whose video is a must-see), sitting down for a “Craft Night”, or having some fun with “Puppet Playground”.

And while the lyrics and bursts of silliness from Jason Rabinowitz and Jacob Stein in songs like “Block House” and “Glitter Everywhere” are aimed to those ages that still may color outside of the lines, the sound is anything but juvenile. Even better? The lyrics may get you all inspired to get creative beyond your dance moves.

If you like to have the perfect tune for every occasion, grab a copy or download The Hipwaders’ newest release, Year-Round Sounds. This pop-rock album features a mix of new and previously released songs like “Smile About” which has an Elvis Costello vibe, and the funky “Just Not Me”. I dig hearing the distinctive keyboard work from the Sugar Free Allstars’ Chris Wiser on “Kings & Queens” and the short-but-sweet appearance of Charity Kahn on “Shadow Dance”.

As the title suggests, Year-Round Sounds also covers beyond the major holidays, with songs like the raucous “Peter Cottontail”, the spooky reggae-styled “Pumpkinhead“, and the lush “Gaia She Knows”. Tito Uquillas and company sure do know how to make a tune that we’ll be humming all year long.

Our long-time favorites Key Wilde & Mr. Clarke are back with a creature-filled album on Animal Tales. This baker’s dozen of songs covers critters on land and sea, with a lot of interesting facts packed into the tunes. Don’t be surprised if your kids can tell you what an armadillo does when it’s scared after hearing “Armando Armadillo“.

But what will make your kids come back to these songs again and again is the toe-tapping beats and clever wordplay that never talks down to younger ears. I especially love “Bear Song” which sings facts about the eight unique species of bears in a much more memorable way than a boring lecture.  “Bombardier Beetle” is full of spoken-word sass with a great bass line, while “Hippo Dance” has no vocals other than the grunting of hippos themselves. It makes for an album as unique as the animals it features.

All Around This World: Latin America is the first album from this  new edutainment company that hopes to bring world music to kids everywhere. Created for use in the classroom or in small groups among kids up to age 9, all albums in the series will have an extensive downloadable and online curriculum for teachers or homeschooling parents to use along with the music. But, for any family who just wants to expose their kids to awesome world music, the albums can definitely stand on their own.

This first album includes over 20 traditional Latin American songs, sung in both Spanish and English, with authentic musical arrangements. Though we weren’t thrilled with the first song, “We Are Happy”, we were soon hooked with songs like “La Guacamaya” from Mexico and “Wang Boto” from Suriname. And for those who can’t wait to hear more world music, the next album will journey to the vast continent of Africa, with more regions to come.

Caspar Babypants’ eighth album Rise and Shine! will help brighten up days that now get dark much too early. Starting with the light and happy title song, the man who we grownups remember as the front man to The Presidents of the United States of America puts his playful touch on a whole bunch of toddler-and-preschool-friendly tunes.

I have always loved how Caspar Babypants can take a familiar song and make it totally his own, like “The Littlest Worm” which uses the melody of  “Sippin’ Cider Through a Straw”, or “Hush Little Baby“ which is made into a Babypants original. And his optimism comes through loud and clear in the upbeat “Rain Rain Come Today” which may get your kids excited for the next rainy day.

With backing instruments that don’t try to overshadow his vocal, the lyrics stand out front and center, turning these songs into two minute stories. And with 19 of them on this album, you’ll have lots of stories to enjoy. Just a note: The last few tunes really slow things down, so save those for when you want your little dancer to put her head on the pillow and sleep.

Musician Morgan Taylor’s buddy Gustafer Yellowgold has a new DVD/CD combo, the sixth in a series about the yellow visitor from the sun. Wisdom Tooth of Wisdom tells the fantastical story of a giant magic tooth that Gustafer acquires and his physical and mental adventures as he looks to return the tooth to its owner.

Trippy? Yes, but considering the far out questions my kids ask on a regular basis, they’ll follow right along. The first song, “Telephone Called”, is a pretty acoustic tune about how a ringing phone can be the source of great imagination before the call is answered. And “Secret Fox” expresses how hard it can be to be truthful all the time.  “I Can’t Feel My Face” is a rocking, horn-filled tune with hilarious visuals about the side effects of a mouthful of painkillers. Toddlers will adore the cute cartoon characters and mellow pop songs on this album, while older kids and their grown ups can delve into the story and enjoy all the thoughtful lyrical wordplay from one of kindie’s most gifted storytellers. And best of all, of course, everyone can sing along.

You’ll find tons of other great music releases for kids and families in our archives.