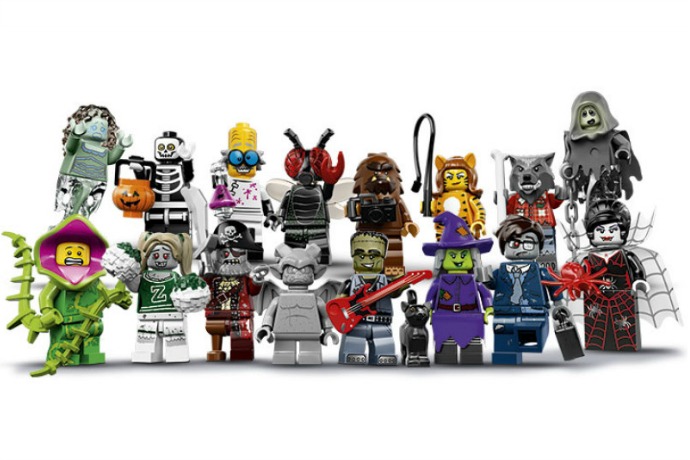 You know what’s scary? When LEGO comes out with a new series of 16 LEGO Monster Minifigures that would be perfect for Halloween, but when you go to their website to snag a few to surprise the kids, you see that they are all sold out.

OK, so maybe this isn’t really a tragedy on any level, but have you gotten a look at these fabulously horrific creatures? We’re looking around at our affiliate Amazon and wow! There’s the disheveled Zombie Businessman minifig holding a tiny newspaper whose headline only says BRAAAINS. There’s the bright green Plant Monster minifig, the creepy Spider Lady minifig, a silly-looking Mad Scientist minifig, and a big-eyed Fly Monster minifig that would make Kafka proud.

I want them all! I mean. . .our kids would really love these, don’t you think? Plus, these would be great to slip into the kids’ treat bags at the end of a Halloween party or just pick up a few to surprise your own ghouls and goblins.

If you really want to get your hands on this new series of Minifigures (for the kids, of course), beyond the Amazon links we’ve included here or the official LEGO site, you’ll want to check out your local toy store, or a few other options. As I write, both Toys R Us and Fat Brain Toys have them in their original packaging for  $3.99 or $4.95 respectively, before shipping. You won’t know which Minifigure you’re getting from the series, just like if you were buying it in the store, but that’s always part of the fun, isn’t it?

If you absolutely must get your hands on either the complete 16-Minifigure lot, or one specific spooky character, check out Amazon, though remember that Amazon’s marketplace operates on a supply-and-demand pricing structure. That single Minifigure could end up costing you up to twice as much, maybe a lot more for some of the more unique ones, like that crazy Fly Monster. But with all the sites, be sure to figure in shipping costs for sure.

In fact, how much people are willing to pay for a two-inch LEGO minifig Halloween Monster character may be the scariest thing of all.