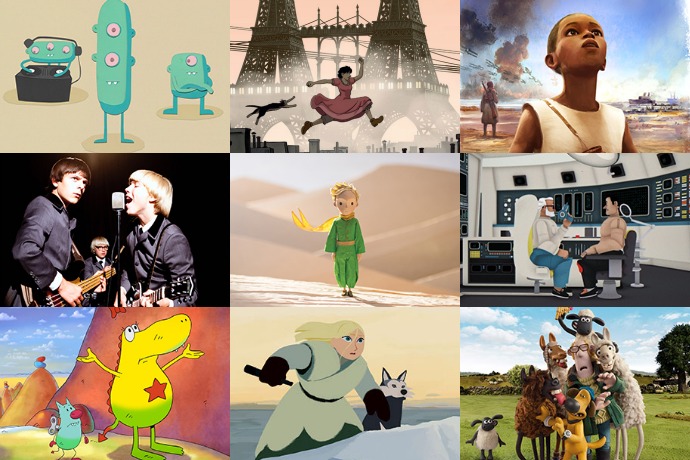 This weekend kicks off the NYICFF, or the NY International Children’s Film Festival, which has become one of our favorite annual traditions. We are definitely a movie-loving household, and work hard to find the good stuff.  (Multiple viewings of My Little Pony: Friendship is Magic not withstanding.) Which means there are times we spend more time scrolling through Netflix looking for trying to agree on something decent, than watching the actual film.

For those of you nodding vigorously right now — or just want something, anything besides the latest shoot-em-up superhero flick or insipid animated franchise — take a look at some of this year’s NYICFF offerings and be sure to bookmark them, even if you can’t make it to a screening in New York this month.

Don’t miss an awesome discount code just for our readers, below

With over 100 new films for kids 3-18, representing more than 30 countries, these are really fine quality films that you rarely get to see, without diving deep into the indie TV network offerings.  Plus, guaranteed some of them make it to next year’s Oscars.

Last year we caught the amazing Studio Ghibli release, When Marnie Was There which I had a feeling my girls would really love. This year, I’m hoping try and catch a sneak preview of the much buzzed-about new adaptation of The Little Prince, starring an impressive roster of voices: Jeff Bridges as the Aviator, Rachel McAdams as the Mother, Marion Cotillard as the Rose, James Franco as the Fox, Benicio del Toro as the Snake and Paul Rudd as the Prince.

Also, in a moment of casting perfection: Ricky Gervais as the Conceited Man.

I’m also stoked to check out April and the Extraordinary World,  Jacques Tardi’s steampunk mystery graphic novel brought to life. Marion Cotillard (again!) stars as the heroine searching for her scientist parents after their disappearance and I bet my kids love this combo of their favorite things: STEM, mysteries, and girl power.

One of the things my kids also gravitate to in movies (and probably why they’re such Studio Ghibli fans) is ability to discover different perspectives about the world from a kid’s perspective. For that reason, they might like Simon Rouby’s Adama which depicts a young West African boy who stumbles into WWI’s Battle of Verdun.

Another standout seems to be Norway’s 2014 Beatles, based on the best-selling coming of age novel by Lars Saabye-Christensen about an adolescent Fab Four of 1960’s Oslo. Might be a nice option until they’re ready for Stand by Me.

I also happen to love short films for kids (anyone else’s kids fall in love with the Pixar short Lava, which showed before Inside Out?) and the NICFF short film programs are a great way to expose kids to lots of kinds of filmmaking in bite-size morsels. Each year they offer some variation on a series shorts about issues girls face around the world and this year it’s a retrospective called Girls’ POV Shorts: The Past 10 Years. If you have older kids who think Coraline is good, innocent fun, take a look at the lineup in the Heebie Jeebies: Spooky, Freaky, Bizarre series — even if Chris Wash’s The Shutterbug Man looks super super creepy, even for me. And little ones 3-6 should be able to sit through the well-curated Shorts for Tots with films from France, Denmark, Spain, Germany, Finland, the UK and the US.

And hey, for you Aardman fans, there’s always the world premiere of Shaun the Sheep: The Farmer’s Llamas and Others. Guaranteed winner.

The thing I really love about attending the NYICFF in person with my girls is that they really feel the excitement of an event that’s bigger than just  a movie — there are people announcing the films, sometimes there are Q&A’s with filmmakers after the show, and they especially love getting to vote for their favorite film on their own tally sheet. We have great talks about which films they liked, which they didn’t, and all the different ways there are to tell a story. Sometimes in languages they don’t understand, and sometimes even with no words at all.

Definitely beats another Spy Kids sequel, that’s for sure.

Catch 75 different film screenings at the  2016 NY International Children’s Film Festival this week. Plus, save $2 of every ticket with code CMP16. Nice!

Or If you’re not in NYC contact programming@nyicff.org to bring the Best of the Fest tour to your community. It is so worth it.