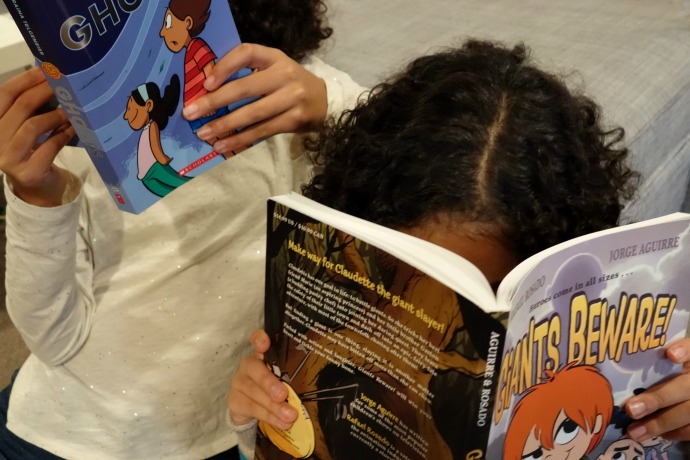 Graphic novels are so popular in children’s literature these days and it’s easy to see why. The long misunderstood genre (“comic books” no more) is finally receiving recognition as engaging literature that combines visual and compelling storylines to appeal to kids who may not be ordinarily inclined to choose a book over a screen. But one common misconception about graphic novels is that they appeal mostly to boys.

In fact, my own daughters, and lots of other girls I know, love graphic novels too — especially the titles that feature smart, engaging, strong, and courageous female characters. And if anything has become apparent over the past year, it’s that the more powerful female role models girls have, the more it opens up their world for the better.

So I’ve put together a list of 10 girl power graphic novels in case you’re looking for some really terrific books to keep your kids busy during the school holiday breaks coming up.

Several of them carry my 9- and 12-year-old’s own personal seals of approval; others were recommended by cool parents I know, by authors, and even my local indie book shop owners, so you know these really are some of the very best.

Oh — and they are definitely, without a doubt, in no way just for girls. All kids benefit from exposure to more diverse, powerful characters in their lives and in their literature. 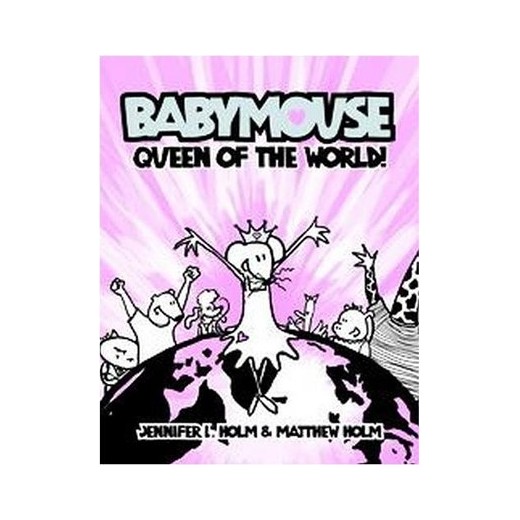 My favorite book expert from my own local bookshop recommended this adorable series for the youngest graphic novel readers who might be fans of Junie B. Jones and Ivy & Bean — two great chapter book series for early readers in their own right.

Babymouse, written and illustrated by a sister and brother team, follows the tale of a quirky, sometimes goofy mouse who yearns for adventure, excitement, and the possibility of becoming “Queen of the World!” But first, she wants an invite to a VIP slumber party. This fun graphic novel offers adventure, lots of laughs, fantastic illustrations and important life lessons about confidence. I think it’s a perfect intro to graphic novels for early readers. 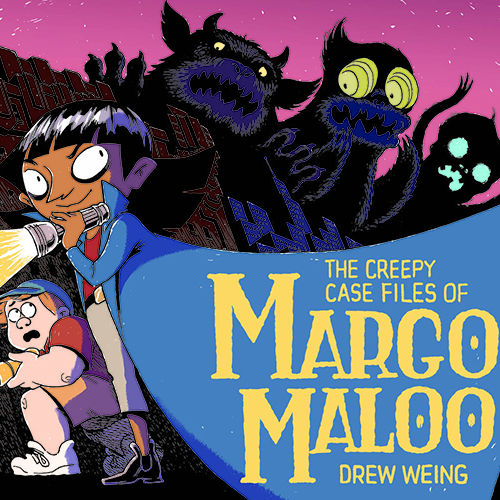 The Creepy Case Files of Margo Maloo by Drew Weing

This series was recommended by my friend Kristen Wald, a former English teacher, avid reader and blogger, and a terrific mom of two. My girls just read Weing’s series and they both liked it a lot — my younger daughter for the overall message of teamwork, my older daughter for the illustrations and compelling mystery of a boy who moves to a new city that ends up being overtaken by monsters.

Luckily the very brave and confident Margo Maloo, a monster mediator (how can I apply for that job?) also lives in Echo City and helps to work out the problems between the humans and monsters. I highly recommend this series because the characters are diverse, the writing is smart, it’s full of adventure and mystery (and a bit of peril — lots of monsters), and the illustrations are just fantastic. 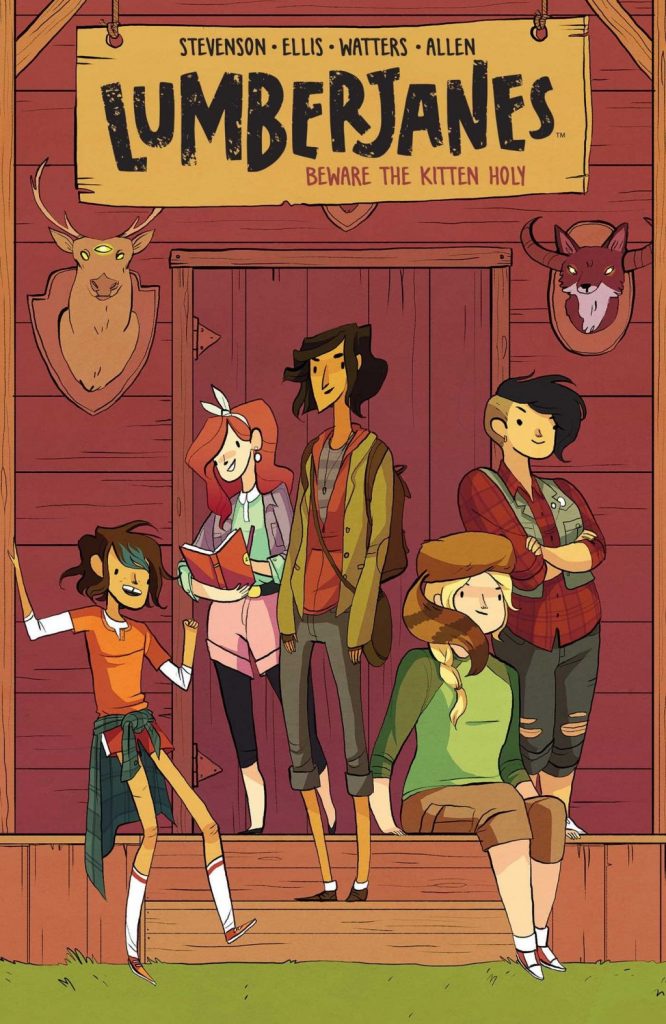 I love that the girls are smart, spunky, courageous, and challenge gender stereotypes, and that each protagonist has her own special skill that helps the group as a whole conquer obstacles.  Plus, there are just so many fantastic references to famous bad-ass heroines (Rosie, the camp director, bears a striking resemblance to Rosie the Riveter) which are fun to catch. Truly, this is a book that can’t be missed. My 9-year-old tore through the entire series faster than our local library could stock the shelves. 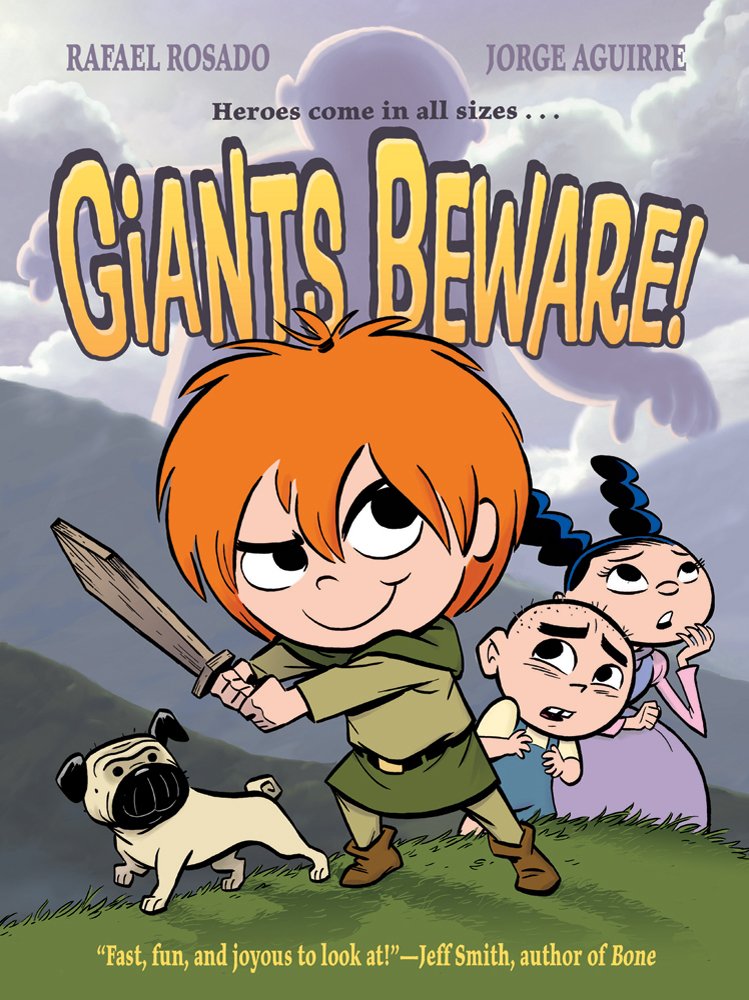 The Chronicles of Claudette series:  Giants Beware! and Dragons Beware! by Jorge Aguirre and Rafael Rosado

The minute you meet Claudette, the protagonist in this series of laugh-out-loud funny stories,  you’ll fall instantly in love with her spunky, confident personality. It’s actually a fairy tale, with all the requisite components: dragons, giants, princesses, castles, and a knight — who happens to be a girl.

(Game of Thrones fans: think of a younger, perkier Brienne of Tarth.)

This series is geared for kids ages 7–10, but I know one 42-year-old who seriously loves them (ahem).The stories are full of adventure, and I love that they challenge the stereotypes of girls wanting to be saved, since the girls I know these days want to do the saving! Rosado’s illustrations are vibrant and full of expression, and definitely add to the “can’t put down” feeling. Best of all, I love the core theme of overcoming fears and the importance of teamwork, and so did my daughters. In fact, they read the nearly 200-page books in just one sitting, if that tells you anything. 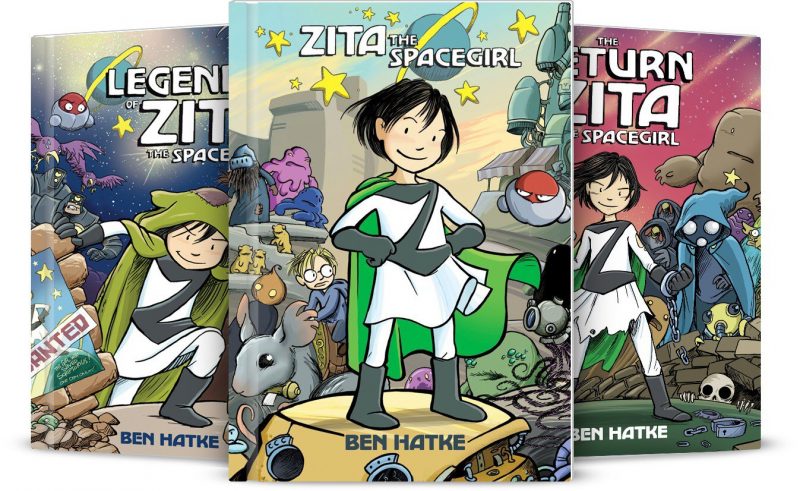 Zita the Spacegirl by Ben Hatke

Jorge Aguirre, the author of The Chronicles of Claudette, recommended this as one of his own favorite graphic novel series. Zita is brave, resourceful and loyal — all traits I think parents want in all kids — and the adventures she goes on are wildly imaginative. Like when Zita’s best friend Joseph is abducted by an alien doomsday cult, after which she vows to rescue him and get them both back home safely.

The book is chock full of girl power, because the heroine must single-handedly battle aliens and monsters, making many difficult difficult decisions to save her friends even at the risk of her own life. The illustrations are a wonderful mix of realism and fantasy — I can totally see why the monsters have been compared with those that Miyazaki movie fans will recognize. And hey, any book with comparisons to Hiyao Miyazaki is a winner for me.

Related: 7 fantastic children’s books to read if your children loved the movies. 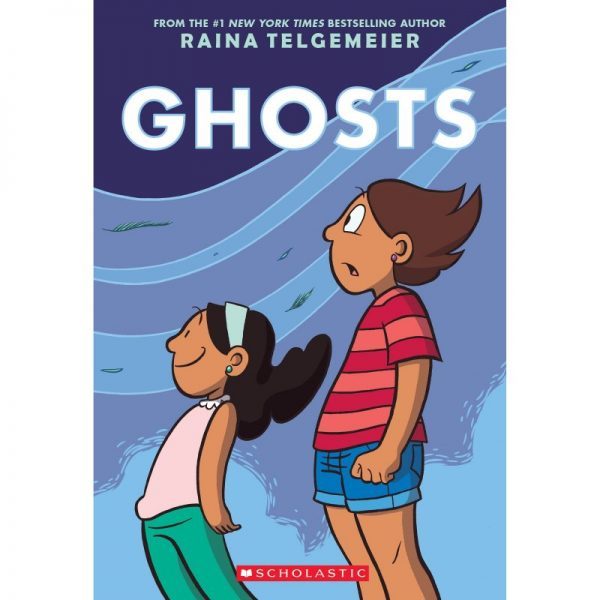 The latest graphic novel by Raina Telgemeier is another example of her true excellence. My daughters fell in love with Raina’s novels after reading her best-selling childhood memoir Smile, as well as her 2012 illustrated novel, Drama. (She’s also adapted The Babysitters Club series into graphic novels, if you’re a superfan). But, in my opinion, it’s Ghost that cements Raina’s status as graphic novelist extraordinaire.

This is definitely one for tweens and young teens. In it, you’ll find a bit of cultural education (the main characters are Mexican-American sisters), an illness (Maya has cystic fibrosis), and paranormal activity that you might have guessed from the title; but above all, this is a story of growing up, friendship, family, loss, and love. There are no superheroes in Raina’s books, just real girls living real life, who are great role models for dealing with life’s greatest challenges. And we could all use more of those. 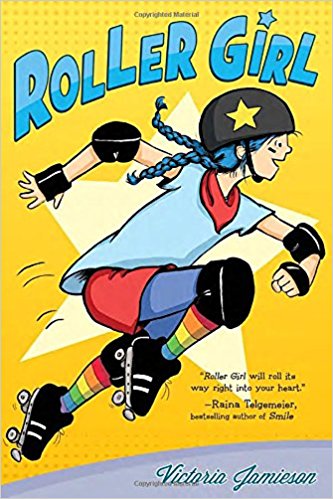 This strong girl graphic novel is another recommendation from my local bookseller, who assured me that fans of Raina Telegmeier will love this coming-of-age story. Here, we follow 12-year-old Astrid who falls in love with roller derby after her mom takes her and her BFF Nicole to a show. Inspired, Astrid wants to attend the roller derby summer camp. Nicole doesn’t. When Astrid makes the choice that’s right for herself, the girls grow apart and Astrid struggles, both with her dissolving friendship as well as her skating skills. But she works hard and grows into a girl who is more confident in being herself — the best kind of girl power, in my opinion.

My 9-year-old agrees, describing Astrid as the girl who never gives up, is always positive, and is “just super cool.” I love that. 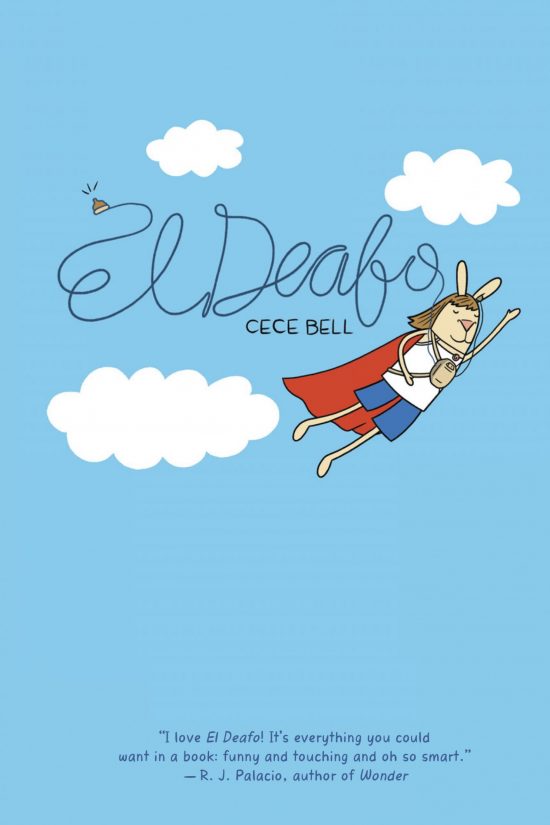 I included this graphic novel in my roundup of 8 outstanding books that teach empathy for kids with special needs, but it deserves a spot on this of girl power graphic novels too. My daughters adore this memoir which chronicles the author’s own hearing loss at a young age, and her experience wearing a large hearing aid in middle school in the 1970s. It has all the hallmarks of a classic coming of age story — crushes, school woes, alienation, and making friends — but with the underlying themes of understanding and accepting differences in our peers. I think both boys and girls will find a terrific role model in Cece’s own character. 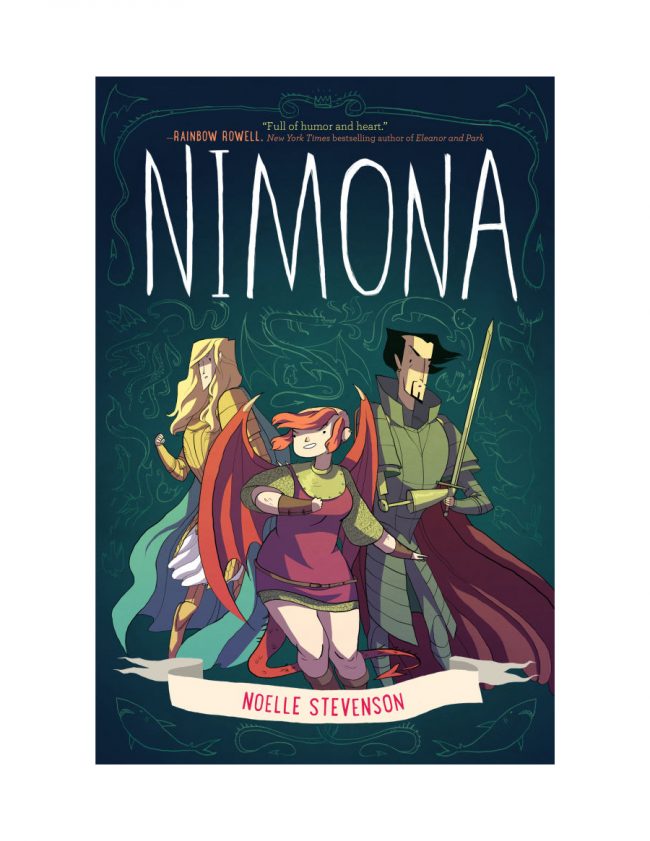 This girl power graphic novel, created by one of the writers/illustrators of Lumberjanes, started out as a webcomic before the author adapted it into a terrific book. Nimona takes place in a contemporary medieval world blending fantasy and science-fiction, with plenty of epic battles to keep the action going. The protagonist, Nimona, is a strong girl teenage shapeshifter who joins the villainous Ballister Blackheart as his sidekick, so you can imagine this is a darker graphic novel than some of the others here.

I think older kids will love the edgy story, which shows that everyone, even villains, has a backstory beyond the expected. Plus, there’s tons of witty dialogue that teens will relate to. Apologies for another Game of Thrones comparison here (not that there are ever too many), but Nimona and Blackheart remind me of Arya and The Hound. They aren’t exactly good per se, but they both possess endearing qualities that will have your kids rooting for them both. 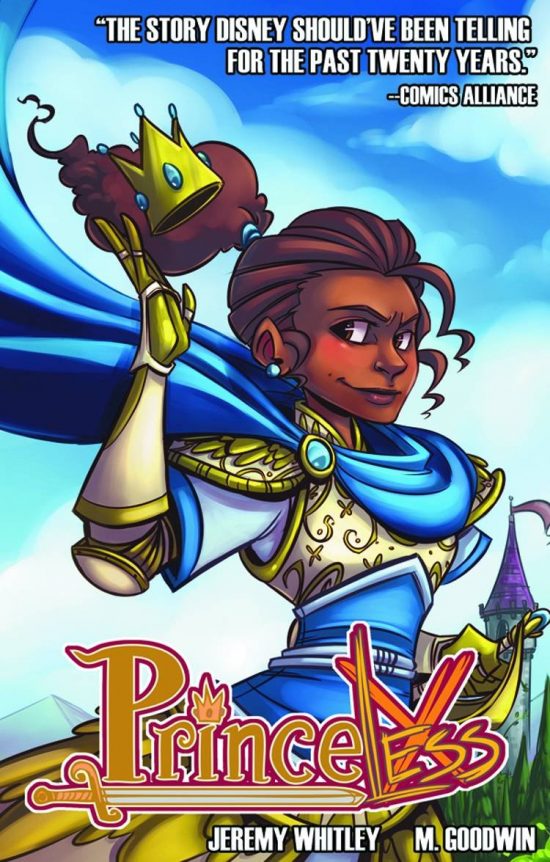 Princeless is the graphic novel that takes on the modern, evolved, self-rescuing princess story. Set in medieval times, this action-packed tale relates the story of Adrienne Ashe who has been locked away in a tower by her monarch parents on the night of her 16th birthday so that she can be rescued by a handsome prince. She is definitely not having it (duh) and so the adventure begins. As you can imagine, the heroine is a smart, capable super feminist, challenging “princess culture” and classic gender stereotypes throughout the entire story.

As a mom of biracial daughters myself, I personally relate to the motivation of author Jeremy Whitley, who penned Princeless expressly to create more positive stories for girls–and girls of color in particular. His hope is that Adrienne can become a strong girl role model for his biracial daughter, and I think he’s succeeded fantastically. Two thumbs up for Princeless from me.