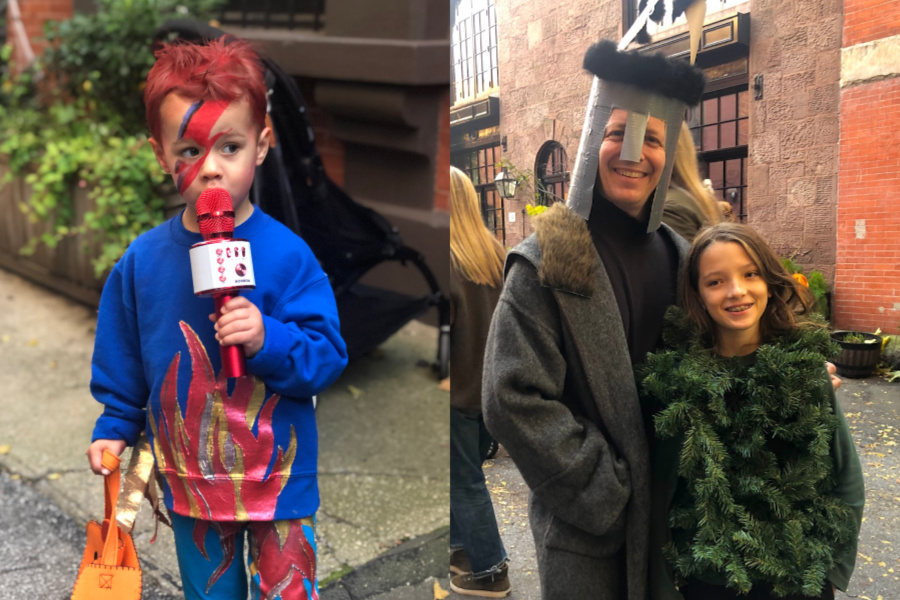 I’m reluctant to even tell any of you about Garden Place, because it is one of the most delightful things about living in Brooklyn — and I don’t want it suddenly flooded with Manhattan people who swoop in and steal all the candy! (J/K anyone is welcome). But honestly, it is one of the best New York City trick-or-treating spots, if only for the brilliance of the costumes and the decorations.

(I talk about it in the most recent Halloween episode of Spawned if you want to learn more about NYC trick-or-treating.)

Each year I promise I’ll photograph some of my favorite costumes there and on Pumpkin Alley, because our friends, neighbors, teachers, and even visitors from other neighborhoods show up and go ALL OUT.

While I lost light early (sniff) here are just a few brilliant, creative, or just hilarious costumes. Brooklyn? I love your commitment!

Related: 11 of the absolute best homemade kids’ Halloween costumes of 2017 – from our kids and more! 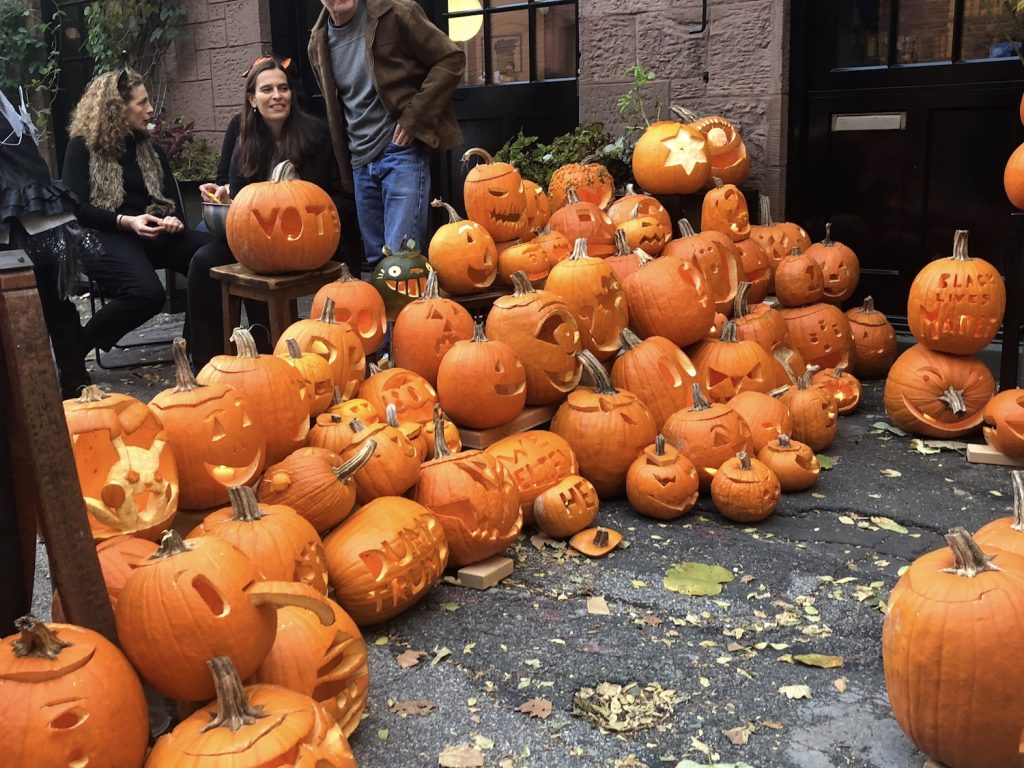 Pumpkin Alley is where it all begins. The work the neighbors all put into this each year is remarkable. They’re also responsible for a pumpkin birth announcement a few years ago that was brilliant. (That is, the birth of a baby…not a pumpkin.) 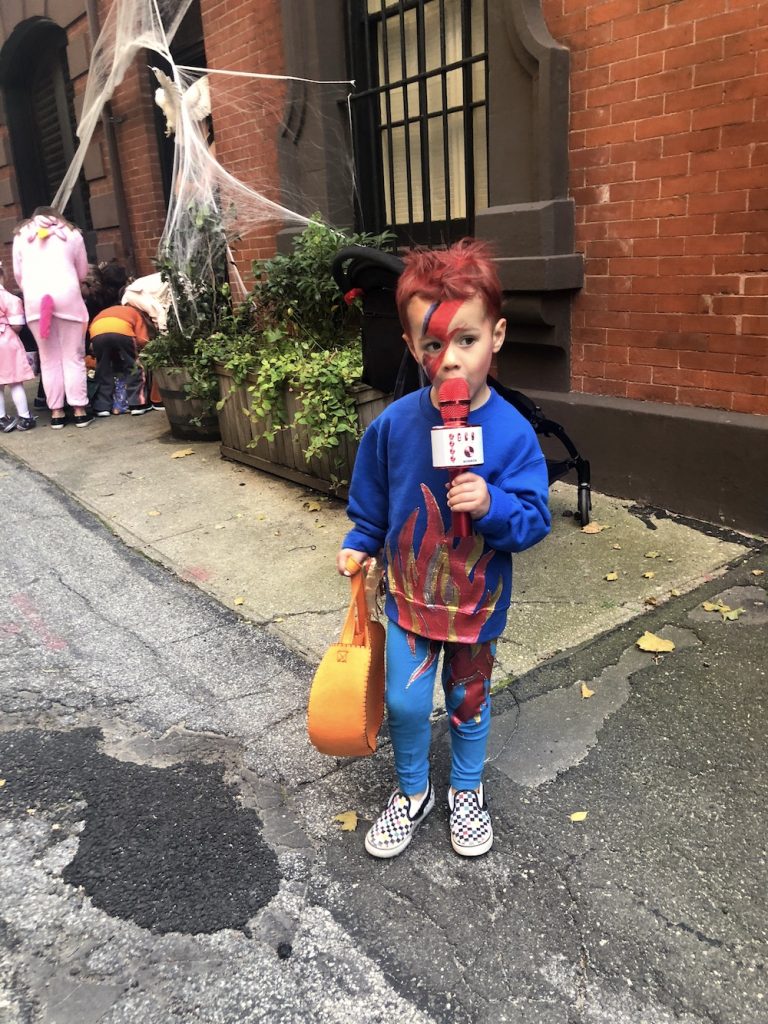 Little Bowie! I told him he’d get extra candy if he could sing Scary Monsters. Maybe by next year. 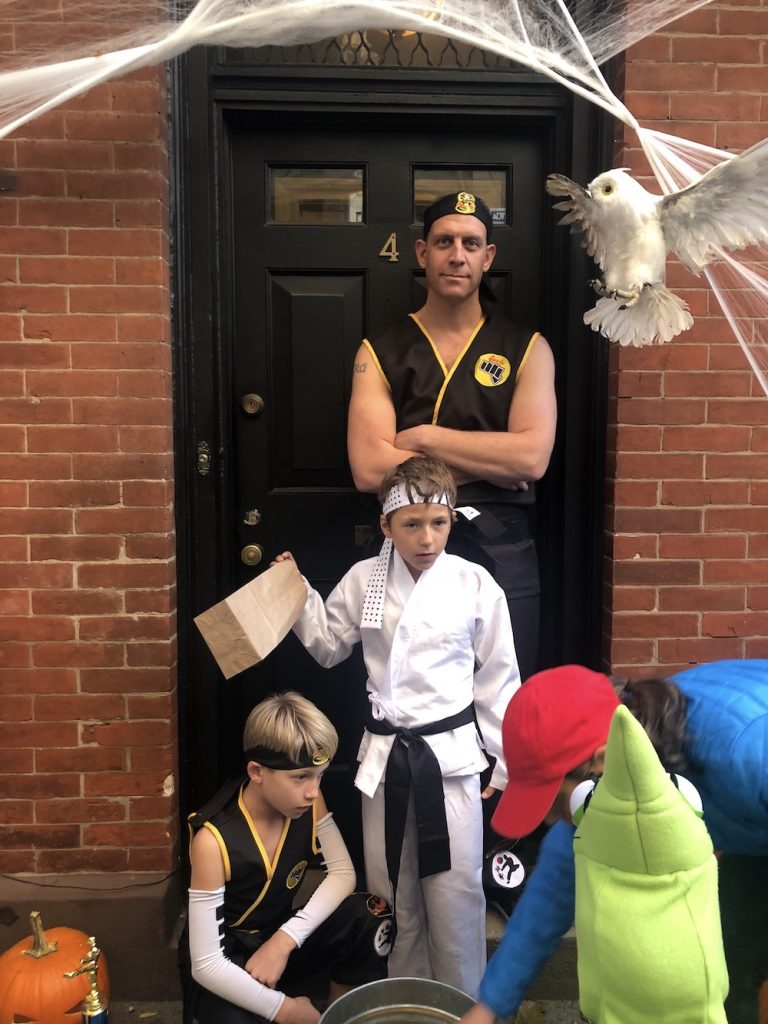 I have to include my daughter Thalia’s costume (1/2) here — Janis Ian from Mean Girls Broadway. And if you’re a Broadway fan, take a look at what she did to our door for Halloween! 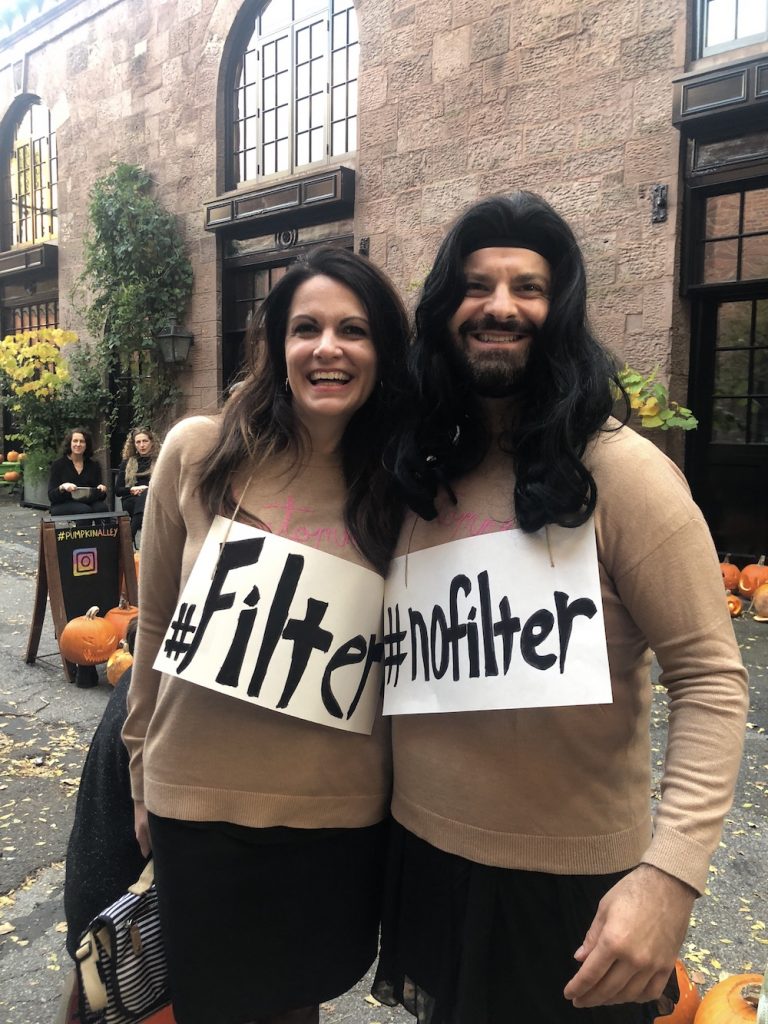 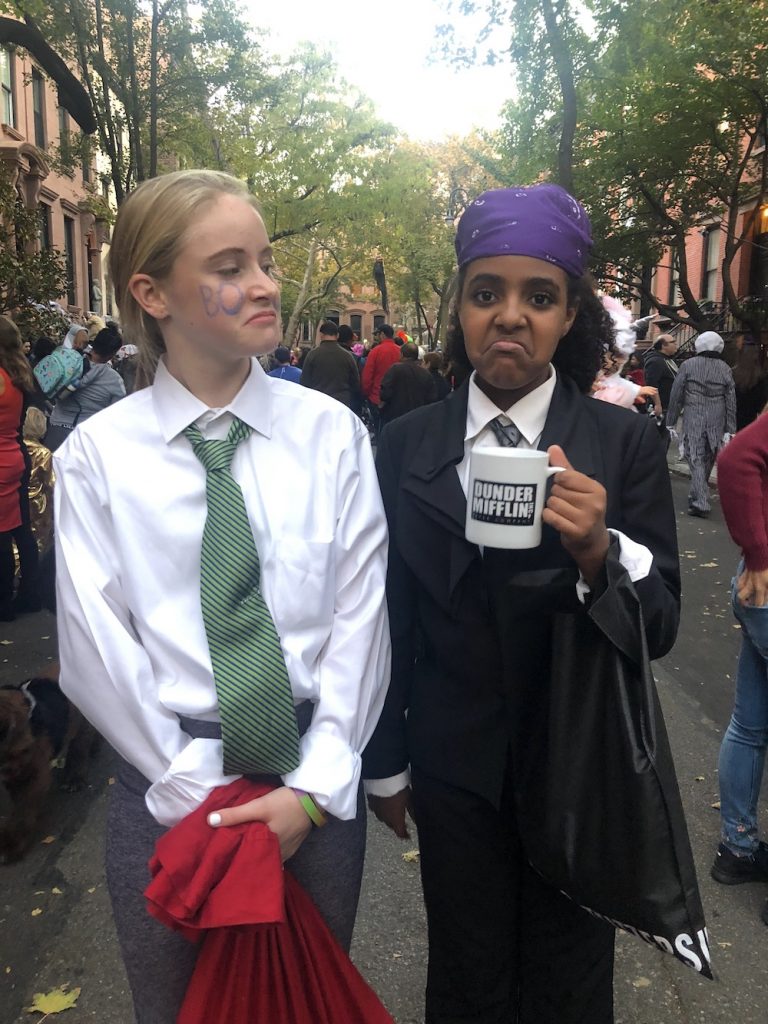 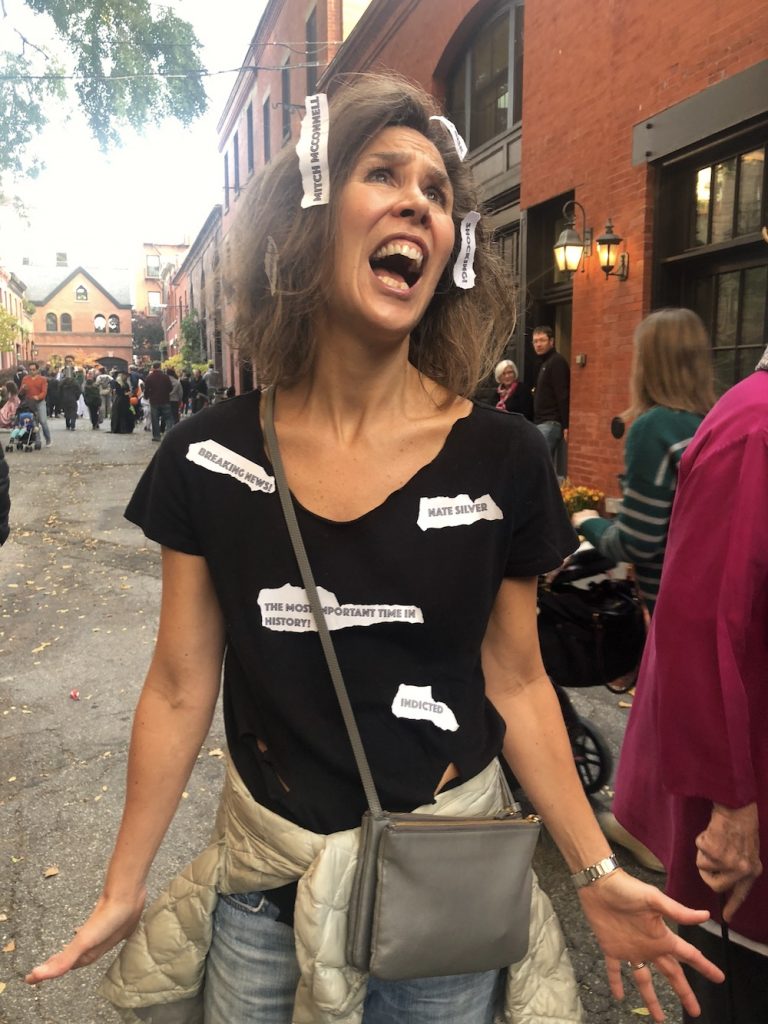 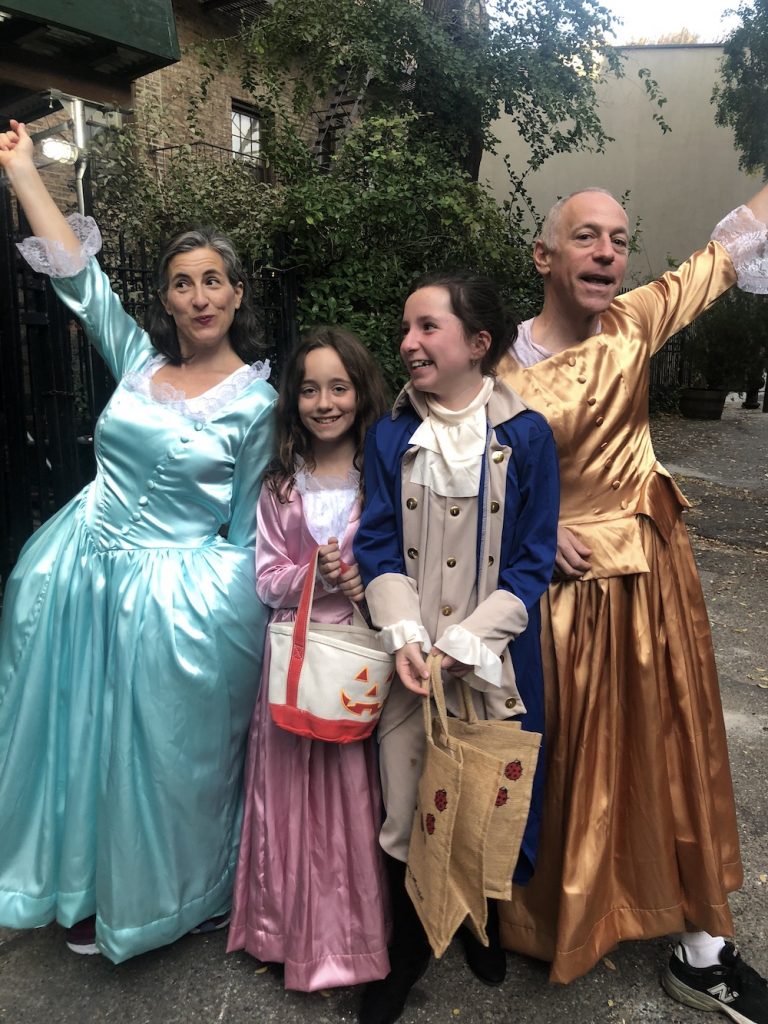 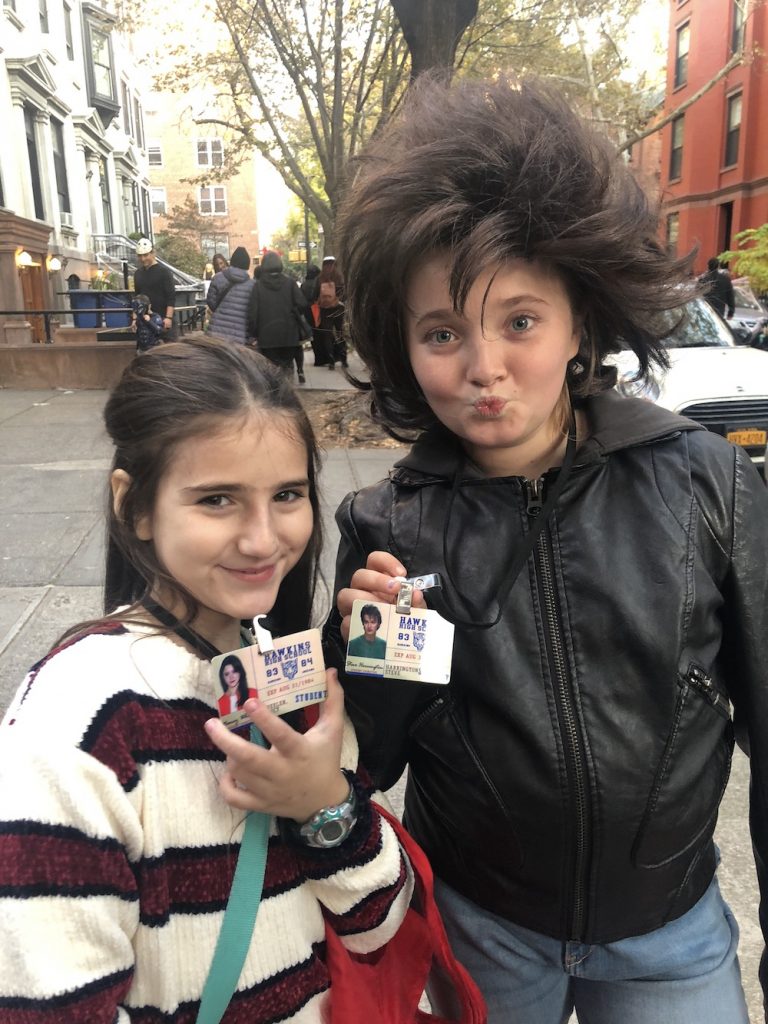 My daughter Sage with her friend Stella as Nancy and Steve from Stranger Things, flashing their Hawkins High ’83-84 student ID cards. 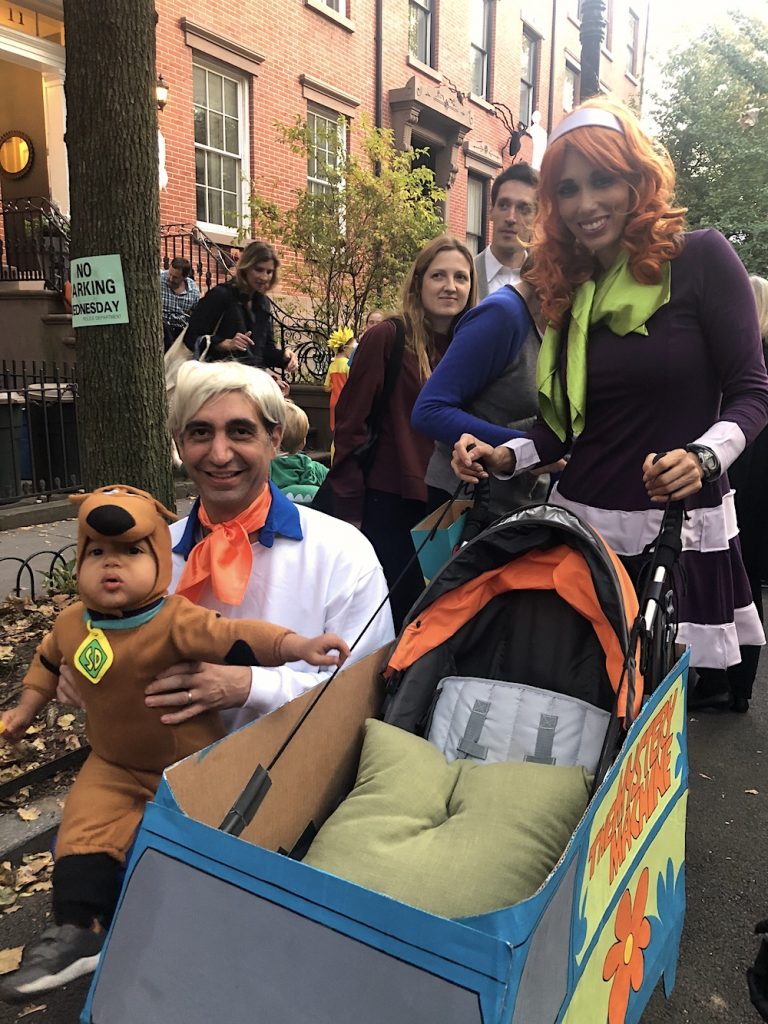 This Scooby Doo family with a Mystery Machine stroller is family costume goals!

Related: 13 of the absolute coolest family costumes from Moana to Guardians to Avocado Toast 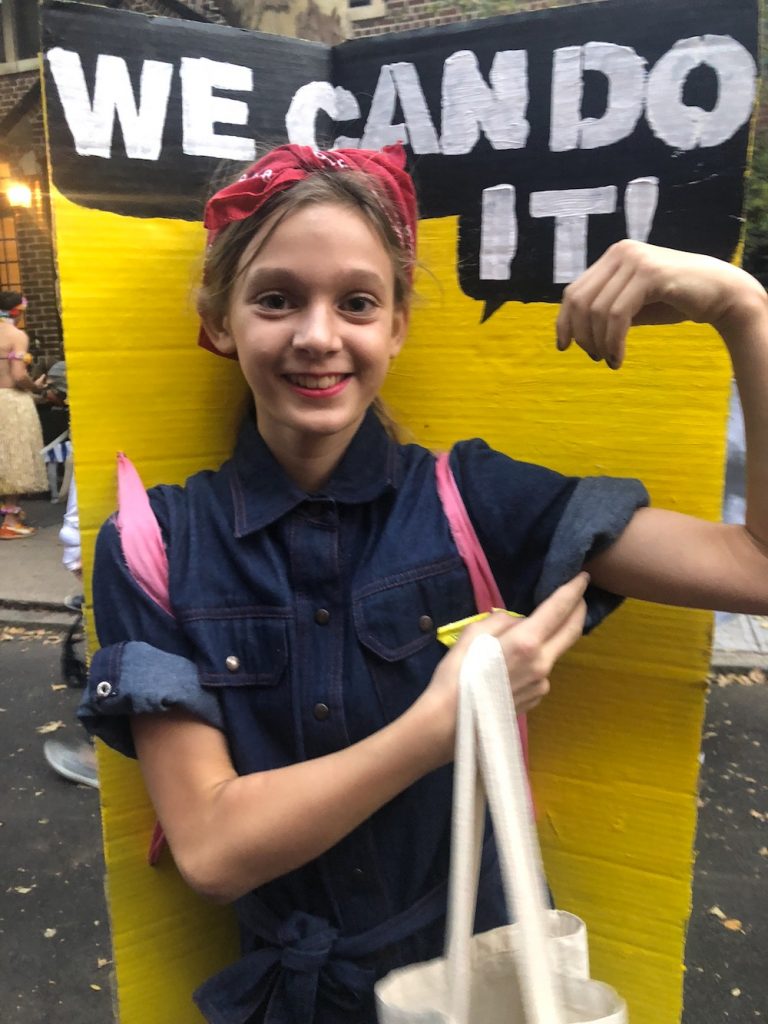 I LOVE Sonia’s Rosie the Riveter! While we saw quite a few last night, the cardboard backdrop made the costume. 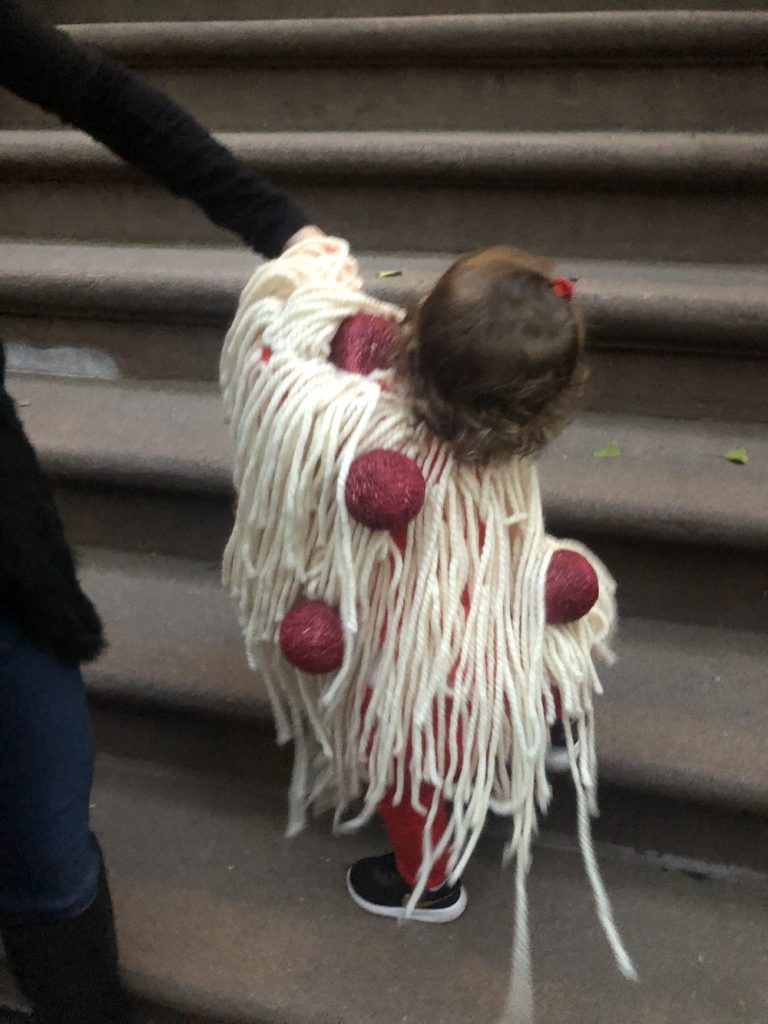 This little spaghetti and meatballs was so teeny, that walking up and down those steps was more fun than collecting candy. 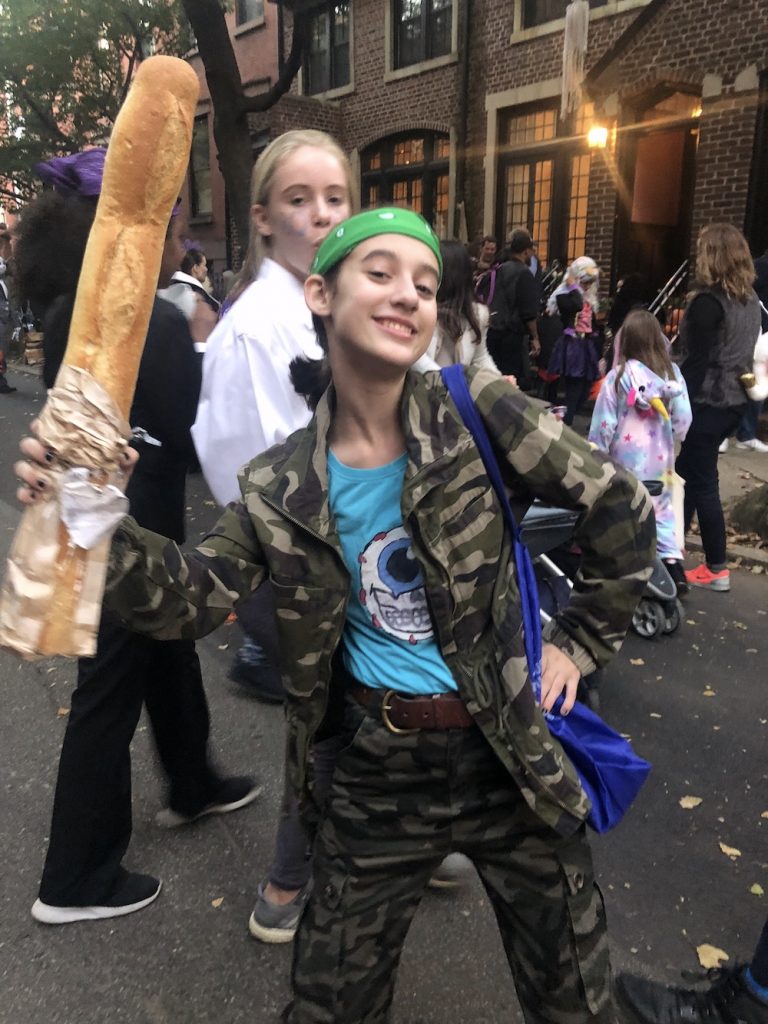 Here’s Thalia in costume 2/2 — Rich Goranski from Be More Chill. Only superfans will get the baguette reference — all I know is she made me run out and find her a baguette for her costume and that was a first. 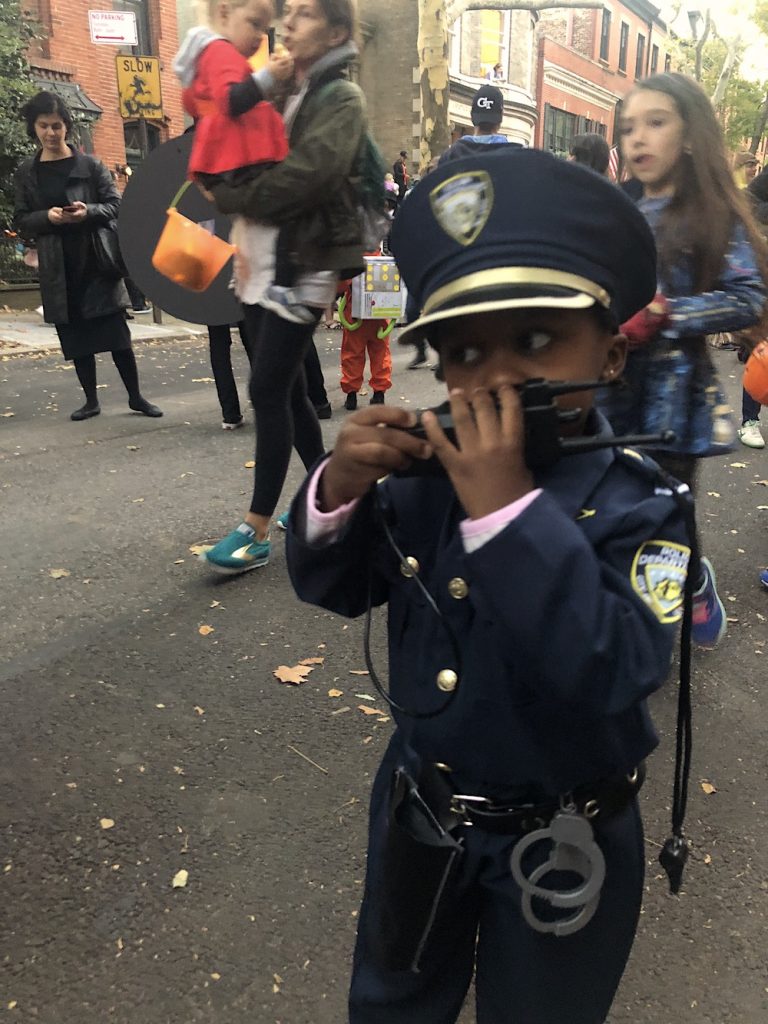 This little girl’s commitment to her cop costume was wonderful — every time someone asked to take a picture, she raised her walkie-talkie. 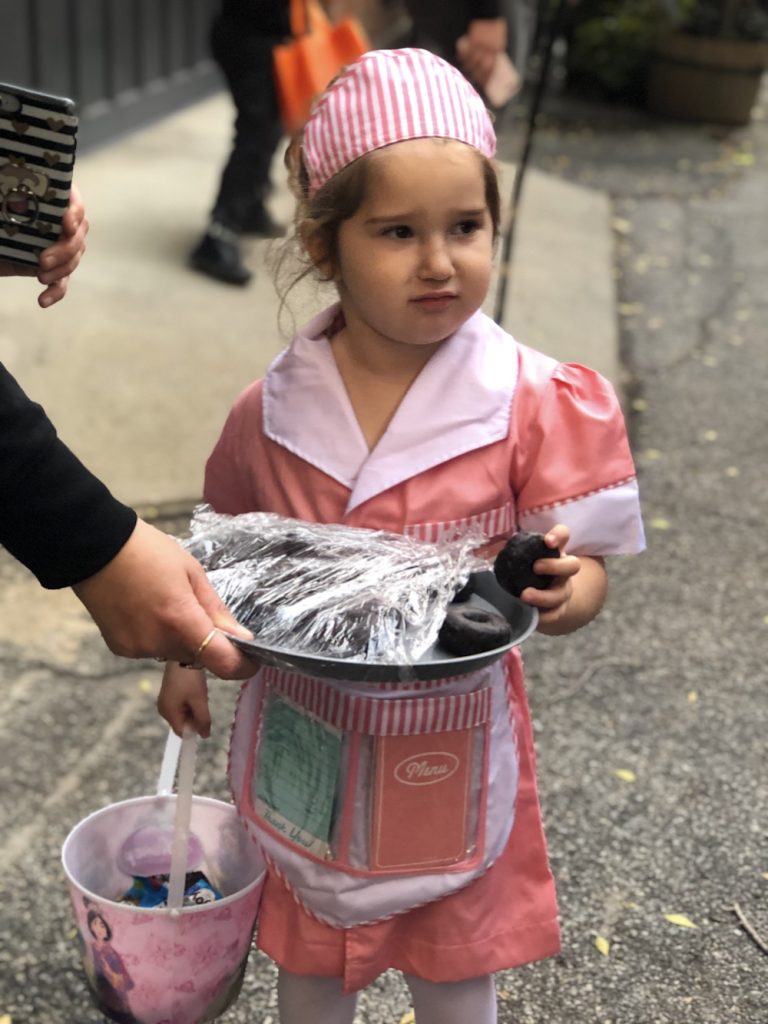 Orly was so committed a a waitress, she was handing out donuts to passers-by. 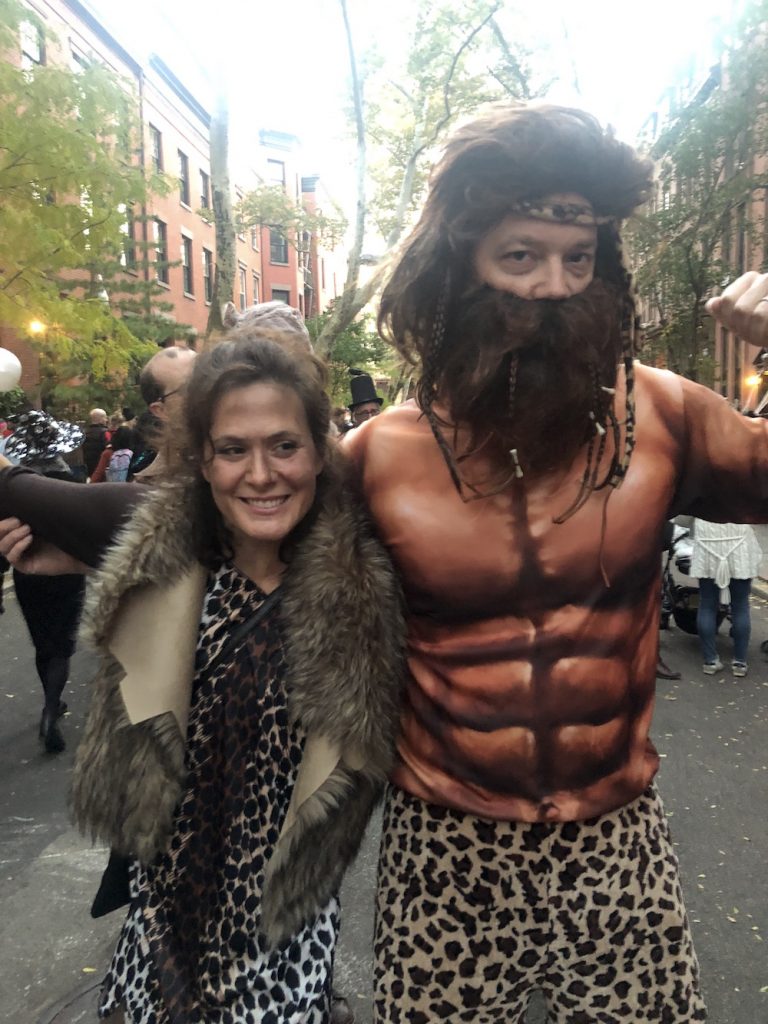 Kudos to anyone over about 18 willing to go out in all leopard print — let alone a man. Nicely done, cavepeople! 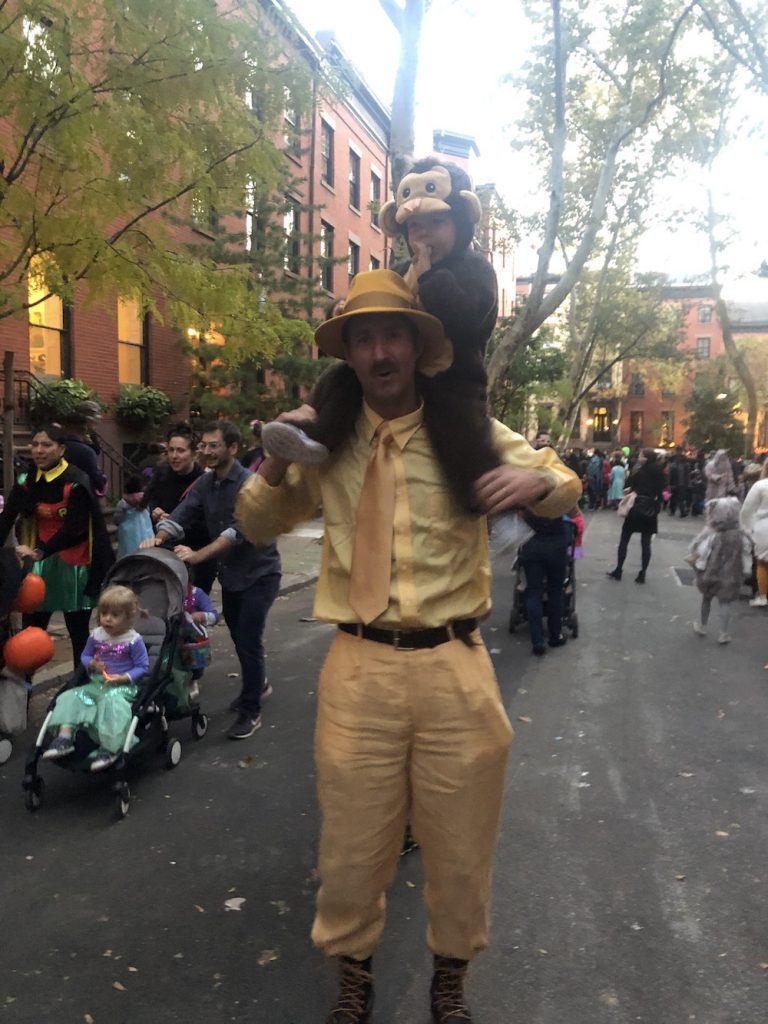 There were so many dads in babywearing costumes, but bonus points to this Man in the Yellow Hat who wore his George on his shoulders most of the night. 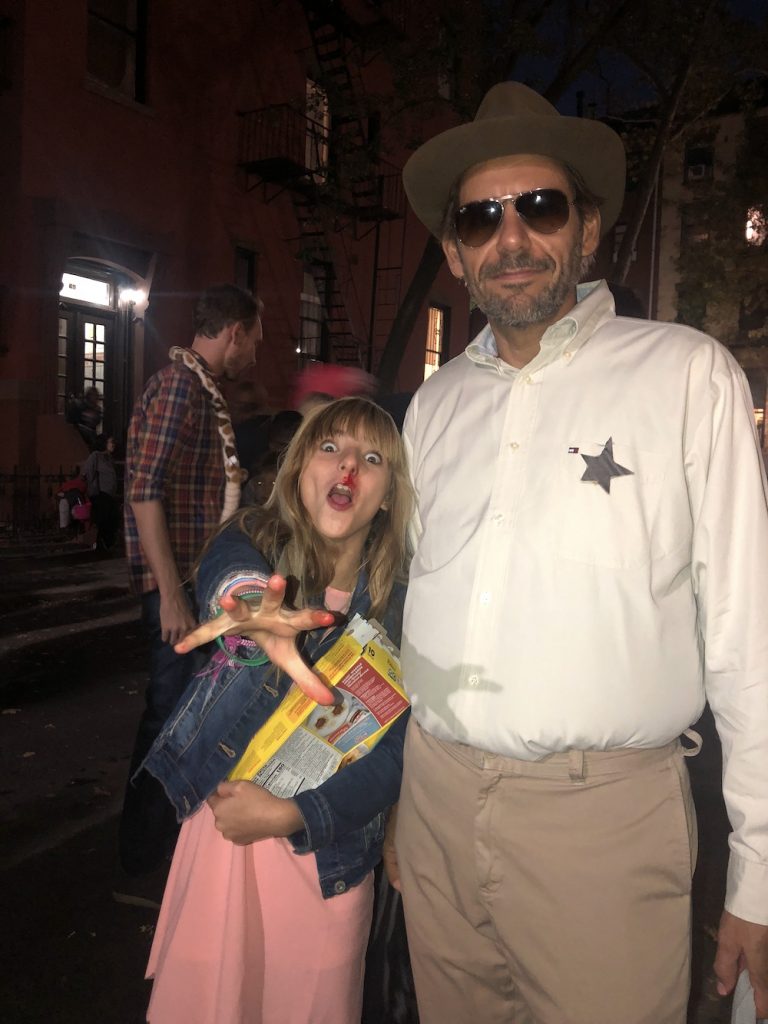 Of course it wouldn’t be Halloween without at least one genius Eleven costume — and I love that her dad accompanied her as Hopper. Win! 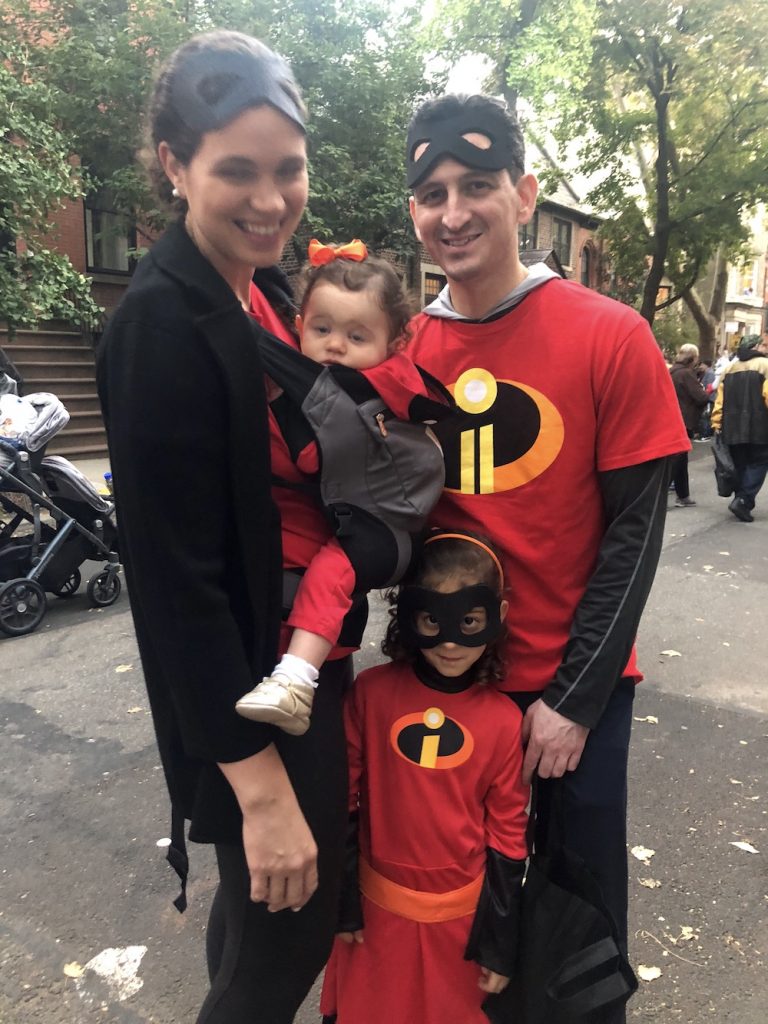 The Incredibles! I thought this baby would be the youngest of all Incredibles babies and then.. 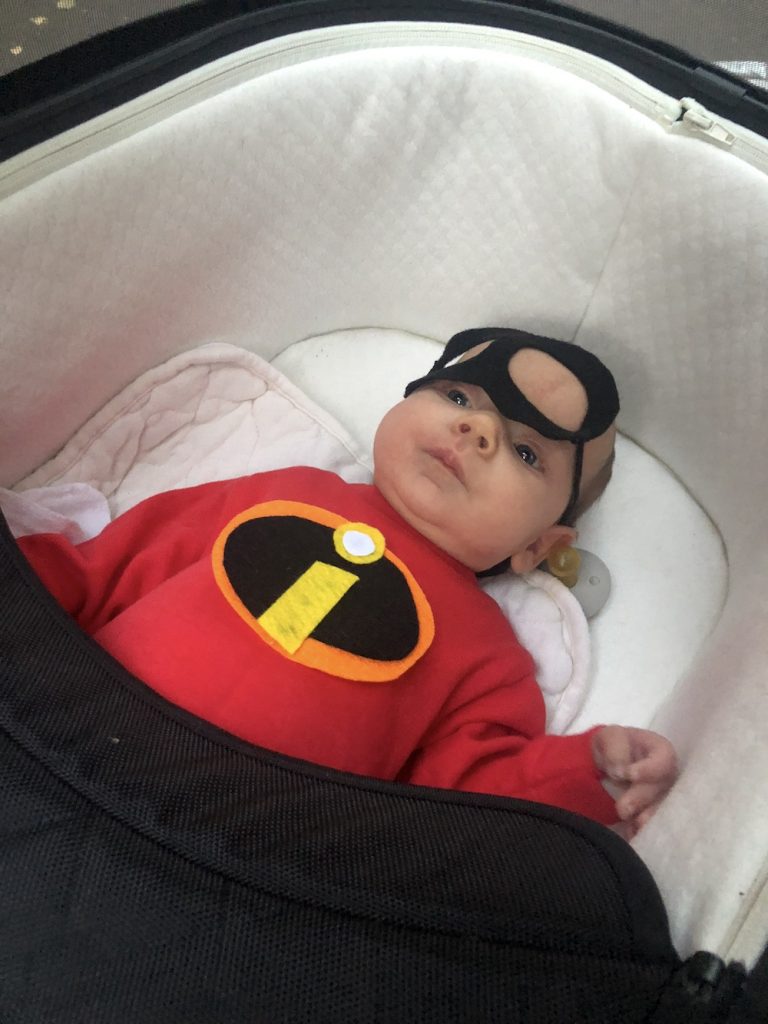 …I met a really wonderful new mom, feeding her brand new super baby. Getting a baby in costume when you’re 2 weeks postpartum? That really is the definition of a superhero.