The crisis in Sudan: What you should know and how you can help

If you’ve been hearing about Sudan, or seeing friends turning social media avatars blue, but aren’t sure what it’s all about, allow us to help.

No guilt, no shame, if this is new to you.

However I’m encouraged, seeing my own middle-school kids and my nieces talking about the Sudanese crisis on social media. It makes me realize that I need to talk about it more too. 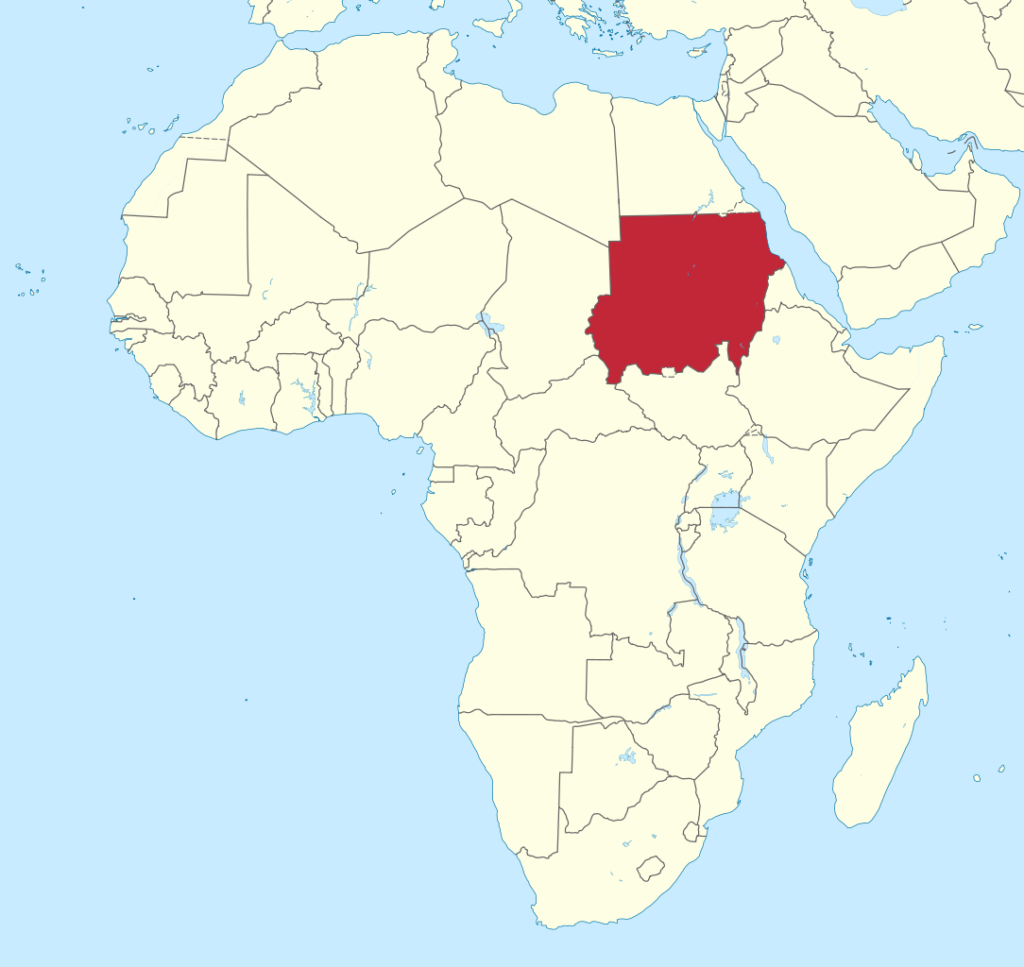 So here it is, in a nutshell, for our caring readers who we know have always been helpful and empathic when it comes crises and disasters beyond the contiguous US, from France to Japan, Haiti to Puerto Rico, Nepal, Syria — and now, we hope, Sudan.

Related: How to talk to your children about mass shootings, bombings, and other tragedies in the news: Helpful resources

The crisis in Sudan: A brief background

Here’s a brief background with links, if you’re interested in learning more. Or if you’d like a quick, 5-minute video summary, Trevor Noah’s segment on Sudan is terrific. 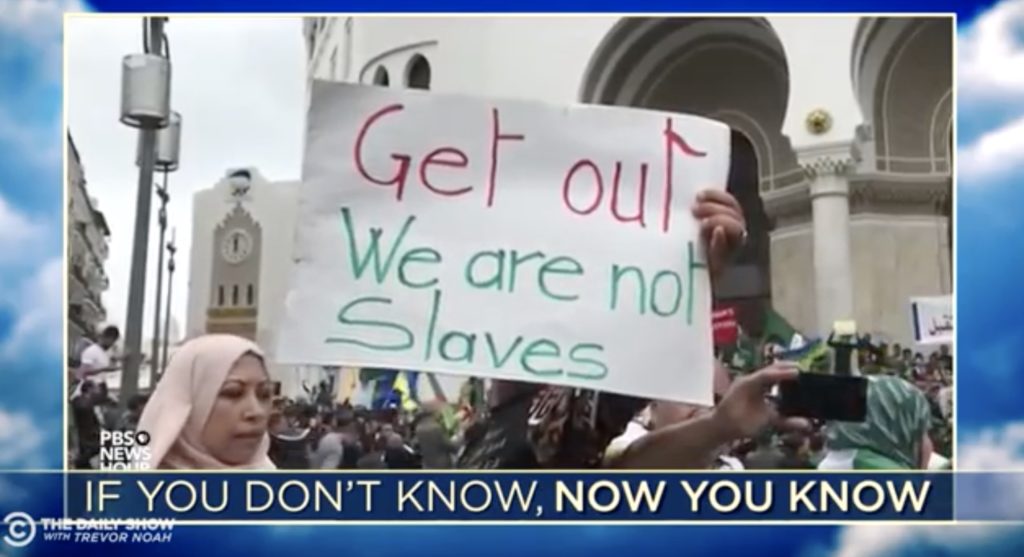 Via The Daily Show with Trevor Noah + the PBS News Hour

For the past 30 years, Sudan has been ruled by authoritarian President Omar al-Bashir, and what the Enough Project describes as a small group of violent kleptocrats and elites who profit of the country’s natural resources and wealth reserves.

In 2011, South Sudan seceded and became its own country, which depleted 95% of Sudan’s foreign currency reserves and nearly 75% of their oil reserves creating additional economic crisis for the Sudanese people.

(Note that the hunger crisis in South Sudan, is separate from the current crisis in Sudan, which is in part what makes this all somewhat confusing to understand.)

In December, the wealthy government tripled the price of bread and increased the price of fuel. There were also cash shortages, with banks and ATMs depleted, and the people finally revolted.

Protests evolved into a huge political movement, and in April, al-Bashir was finally thrown out of power.

However the same military regime remains in control now. There have been negotiations to establish a democratically-elected civilian government with three years of transition to prepare for the vote — but negotiations have fallen apart, the military is retaining its hold on the government, and massive protests have continued.

According to the BBC, demonstrations are being led now by a collaboration of doctors, health workers and lawyers. They report that “protesters are mostly young, reflecting the country’s demographics, but people of all ages have been seen in the crowds.

Women are at the forefront of the demonstrations and a video of a woman who has been named Kandaka, meaning Nubian queen, leading the chants has gone viral.”

This is leading to tens of thousands of Sudanese trying to flee the country, and a new refugee crisis is emerging.

Related: Social media, sexuality and school shootings:
Tips for 10 hard talks every parent will have with their kids 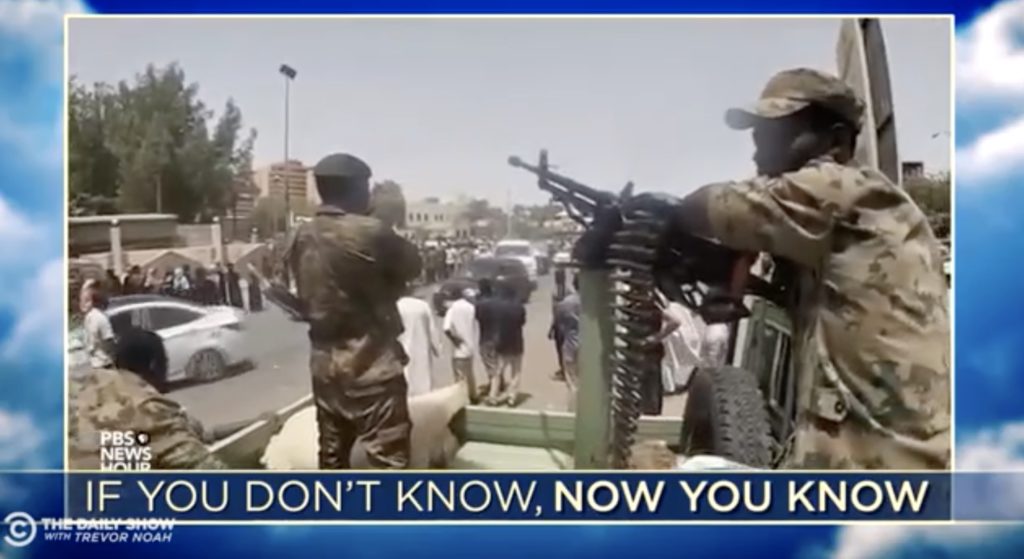 Via The Daily Show with Trevor Noah + the PBS News Hour

On June 3, 100 peaceful pro-democracy protesters were shot and killed when the paramilitary “security” forces opened fire on them. Violence has escalated since then in horrific ways.

Currently, civilians are being raped, detained, and murdered, their bodies thrown into the Nile. Doctors and medics are being targeted. Children are being detained, sexually abused, and recruited to join the fighting by military forces.

To add to it, there are shortages of water, food and medicine.

The UN and the World Heath Organization are also calling out targeted attacks on hospitals in the Sudanese capital of Kartoum, as well as mobile health tent clinics that have been intentionally set on fire and destroyed. Medical equipment is being looted, emergency service are being shut down, and health care workers themselves are being targeted for assault and rape.

This is, as you can imagine, leading to urgent migration from Sudan resulting in yet another global refugee crisis.

The crisis in Sudan: How you can help:

I know it’s frustrating to hear of something so big, and so awful — especially something that feels so far away — and to feel nearly powerless. But it’s not true. You can always do something.

And helping to end this crisis not only helps other humans (which is reason enough), but it has economic and global security effects that impact all of us. 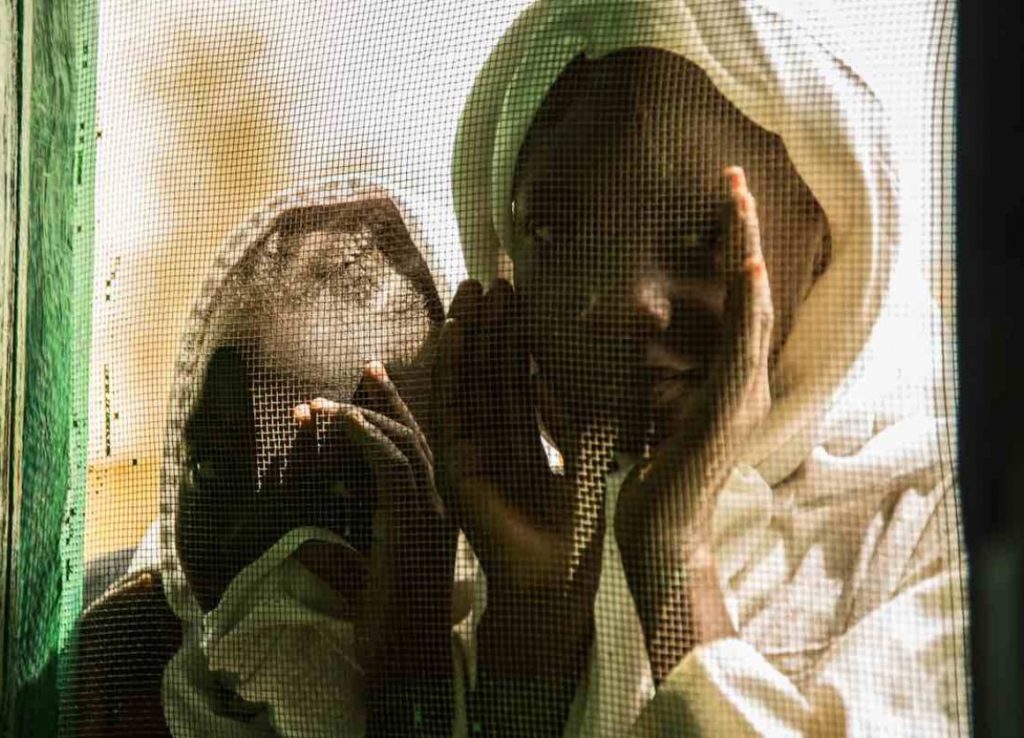 Here are some things you can do:

First off, beware of imposter organizations. Do not follow non-verified Sudanese “aid” Instagram accounts which take advantage of the goodwill of regular people, promising to donate meals in exchange for shares or likes. Instead, donate to organizations you know, or those supported by trusted friends, pundits and thought leaders.

UNICEF, as always, is providing support focusing on children — they report that at least 19 children have been killed and another 49 injured since the military crackdown on the protesters. Additionally, Some 2.4 million Sudanese children are malnourished from the ongoing economic crisis. Learn more through the @UNICEFSudan Instagram account.

Save the Children is another impactful organization focused on children, and has also been on the ground in Sudan for years.

The Enough Project works to end conflict in Sudan and beyond.

The North American alumni of the University of Khartoum have initiated a Facebook fundraiser for Sudan to provide food, water, and medical care through a wide network of community organizations inside the country. It’s an established US non-profit, and the fundraiser seems totally legit. (h/t Melissa Locker at Fast Company)

If you don’t have money, you can use you social media accounts to amplify the message — you never know who’s reading.

And if you are a medical or wellness practitioner and can offer your services to Sudanese-Americans experiencing trauma or PTSD, @seher is compiling a database via Google Docs at bit.ly/sudanhealing. She will make the list public in the coming week. (h/t @the.wing)

I know that it feels that calling Congress doesn’t matter, but it does. Pressure works, and the more, the better.

This op ed from George Clooney and John Prendergast about how congress can help stop the killing in the Sudan is a great read. They point to The Magnitsky Act (something you’ve probably head a lot about in the news over the past few years). It allows the US government to respond to human rights offenses and corrupt governments with powerful economic sanctions.

So call your representatives and let them know how you feel. (Resistbot lets you do it by text and makes it really easy.)

It’s important to contact your own representative; you will have more sway, though of course you can contact anyone.

Also look at the members of Congress’s subcommittee on Africa, Global Health, Global Human Rights, and International Organizations. The Oversight and Investigations subcommittee may also have a lot to say about invoking the Magnitsky act and strengthening sanctions.

Basically, be creative. There are lots of ways in,.

If you want to know what to say when you call or write, our friends at The Wing suggest providing your name and identifying yourself as a constituent, then saying: “I’m calling to support sanctions and diplomatic actions against these humanitarian horrors and establish civilian rule.” It always helps to add something personal, too.

To get more specific, BBC Africa editor Fergal Keane has stated that US’s condemnation of violence “will only mean something if the US demands that its regional allies – Egypt, Saudi Arabia and the United Arab Emirates – exert pressure on the Sudanese military.”

If you’d like more detailed actions to recommend when you call, read the George Clooney and John Prendergast piece that offers lots of well-considered, effective ideas.

The op-ed concludes by pointing out that “resolving Sudan’s current crisis would prevent an escalation in the flow of refugees from Sudan, address the persecution of Christians and other religious minorities, counter the activity of extremist organizations supported by the al-Bashir regime—and prevent another round of mass atrocities in a country whose suffering has few parallels globally.”

If you have organizations you like to support or other resources, please share them in comments and we can update this post as new info comes out.