The one scene in Hidden Figures that every parent should be talking about | Thinking: Parent 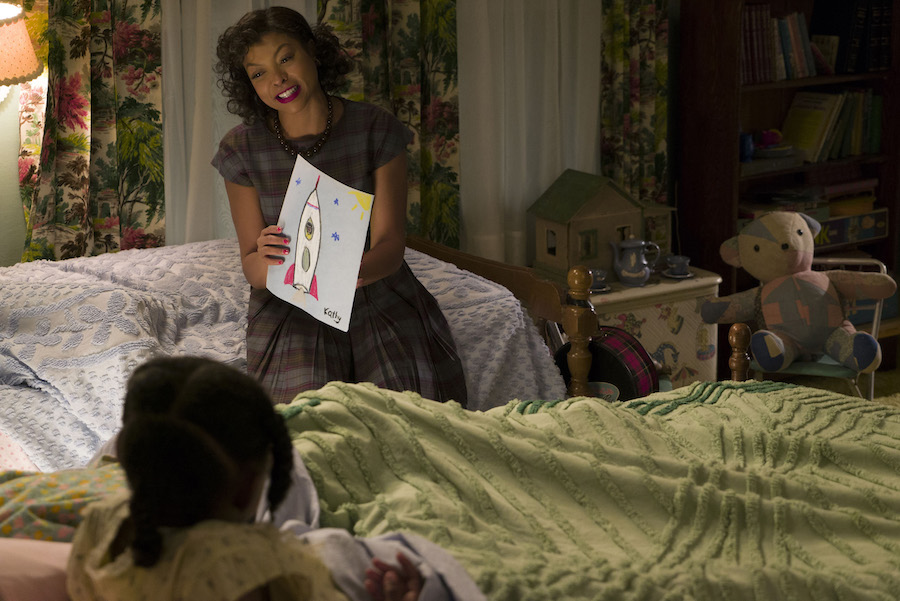 Hi, nice to meet you. I’m one of the many parents who tries desperately to squeeze in a few last-minute Oscar nominated movie screenings just before the actual ceremony each year so I have at least a moderate shot at the family Oscar pool.

At the very top of my list was Hidden Figures, which I waited to see until my own girls could join me. Yay for February break! And while there are so many moments that will stay with me for a long time, there’s one scene in particular that doesn’t seem to get a lot of analysis, but to me, perfectly embodied why the story of these three incredible African-American women mathematicians at NASA is such an important one.

Early in the film, there’s a scene in which Katherine Johnson (Taraji P. Henson) is tucking her three daughters into bed late at night after a long day at work — something awfully familiar to a lot of us working mothers.

Just before bed, one of her youngest girls presents her with a lovingly hand-drawn crayon illustration of a rocket — featuring her own mom’s face peeking out the window.

Johnson kind of pshaws it away — like, who me? Oh, I’m not an astronaut. And then the scene ends and the story moves along.

But this, of all the scenes, is the first one that brought me to tears. This is the scene I keep replaying in my mind.

Now it would seem the intent of the scene was to both demonstrate the late hours and family sacrifices that Johnson made for her job. At the same time, it was a reminder of all the hard-working people behind the scenes; the ones who tirelessly put in the work without the rewards of glorious front-page news stories or ticker-tape parades like a (white, male) John Glenn or a (white, male) Alan Shepard.

But what really struck me was another message entirely.

I was utterly taken with the idea that Katherine Johnson’s young daughter saw absolutely nothing progressive, unusual or even statement-making about depicting a black woman as an astronaut in 1961.

Her daughter drew a black, female astronaut simply because having a black mother who worked for NASA aeronautics was her everyday reality.

It was a poignant and essential reminder that when our kids — boys and girls — see women, men, of every race, every color, every background, in every kind of career, it by definition broadens the limits of their own imaginations and career aspirations.

And, of course… well, yeah. Presidents.

Diversity turns what if… into what can be.

(And yet how many of our kids know her name and story, the way they know Neil Armstrong or Buzz Aldrin, or even Sally Ride?)

If there’s one point that was made abundantly clear in Hidden Figures, it’s that while women still, as the old adage goes, have to work twice as hard to prove themselves half as competent as a man — women of color have to work ten times as hard.

If we don’t say that out loud, we can’t fix it.

And we have to fix it.

Because the more we give all people the opportunity to succeed in every profession, the more visible our hidden heroes become — the more all of our kids will inherently see that potential in themselves too.