Our favorite space themed toys and kids’ gifts to celebrate the 50th anniversary of the Apollo 11 moon landing. 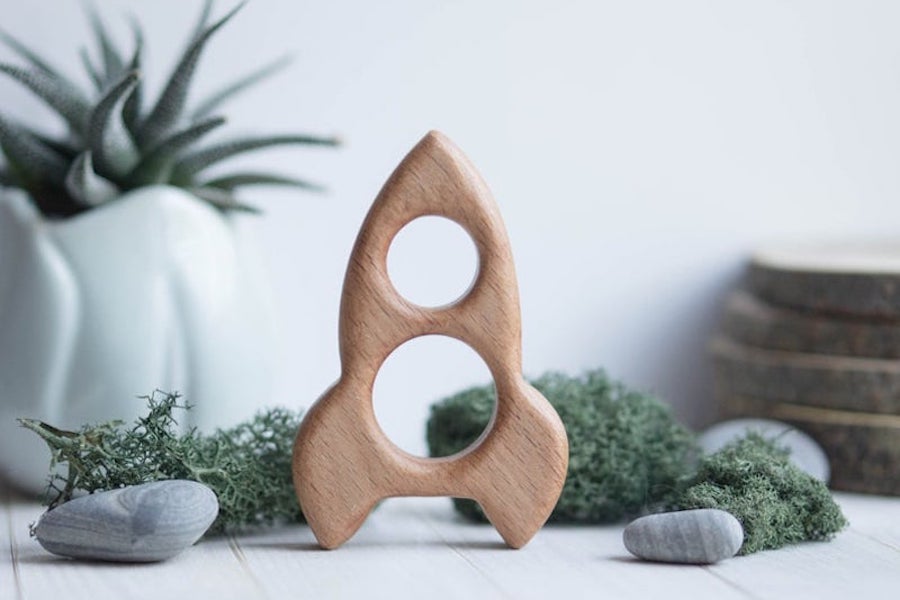 This month marks the 50th anniversary of the Apollo moon landing on July 20th, and our kids are so excited about it. Considering it’s an event that happened way before they were born, I love their enthusiasm. In fact, my son just checked out a bunch of moon landing books at the library this week!

With so much heightened interest around astronomy, space travel, and NASA’s accomplishments specifically, we put together a fun collection of space toys and gifts that kids will be clamoring for this year.

And hey, maybe you can do a little moonwalk while you eat some Moon Pies on the big day too. 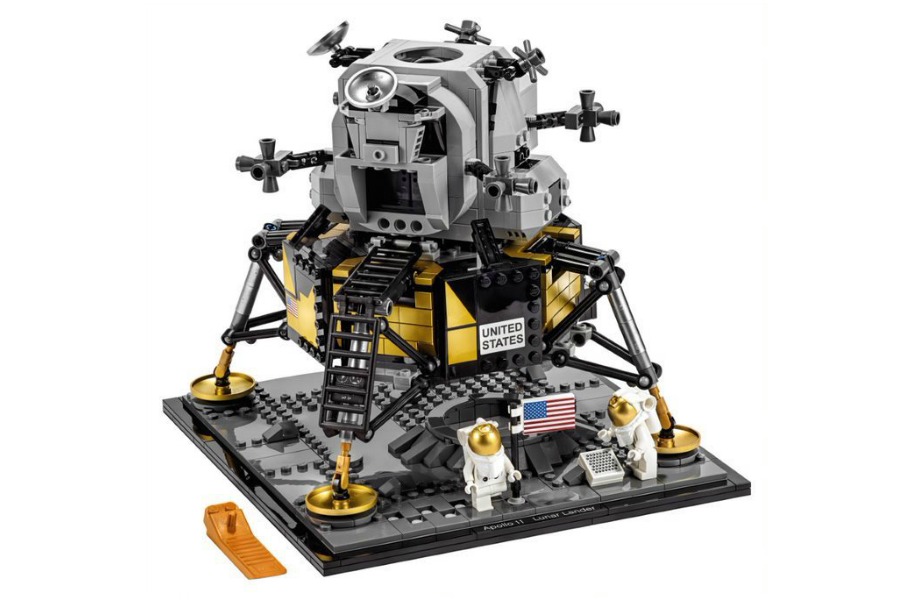 LEGO has launched an incredible new building set in honor of the moon landing anniversary as part of their CREATOR Expert collection. The NASA Apollo 11 Lunar Lander is huge and it’s awesome. And it’s the perfect inspiration for kids who hope to take part in a real rocket launch one day. Or, just any dedicated LEGO builder. 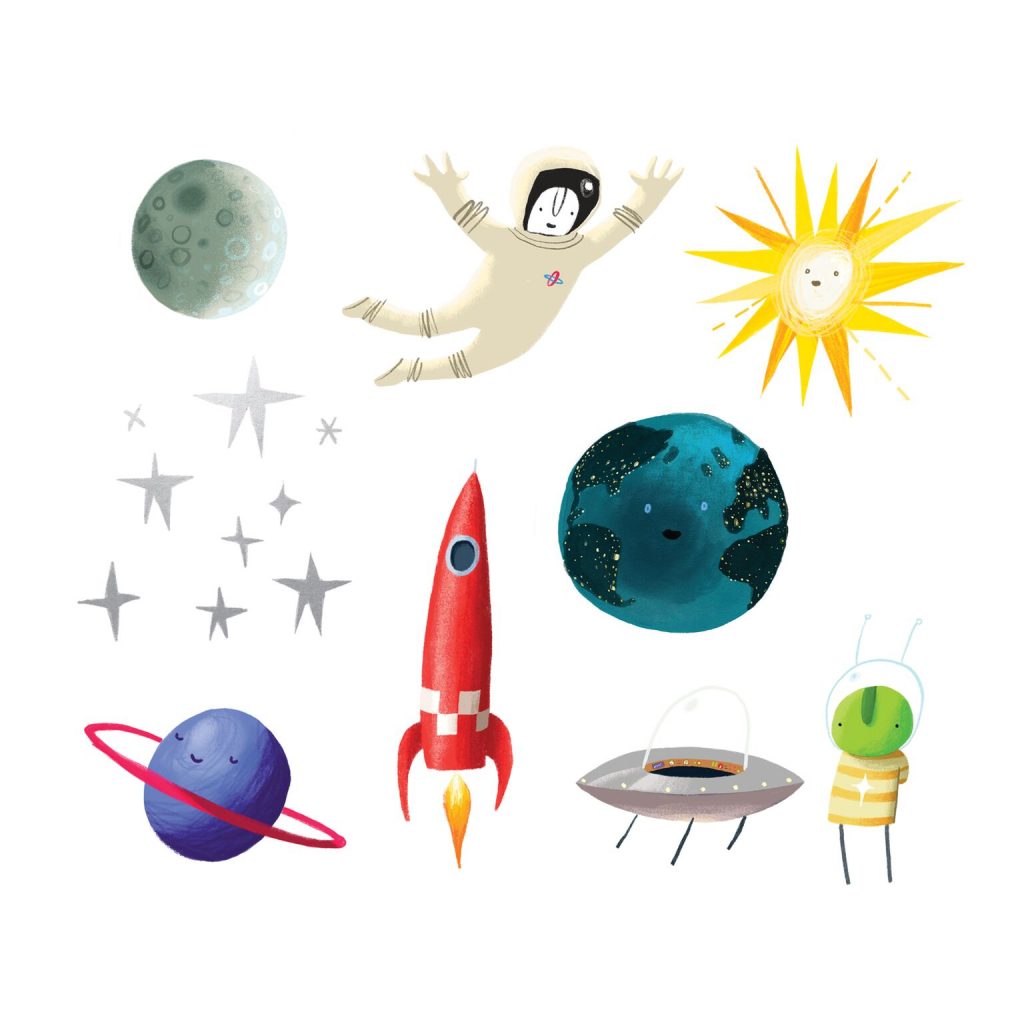 As a huge fan of Oliver Jeffers’s children’s book illustrations and Tattly’s artistic temporary tattoos, I couldn’t resist including their collaboration of space-themed temporary tattoos here. To avoid fighting over who gets the adorable alien or the bellyflopping astronaut, I might get each kid their own sheet to apply — me included. 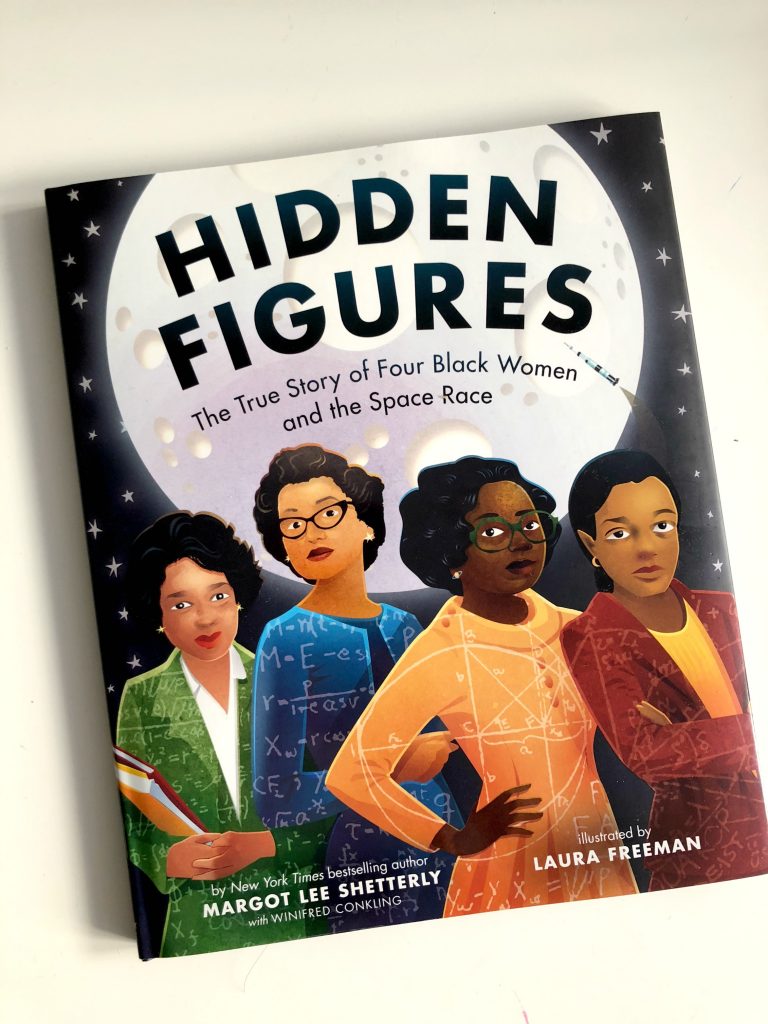 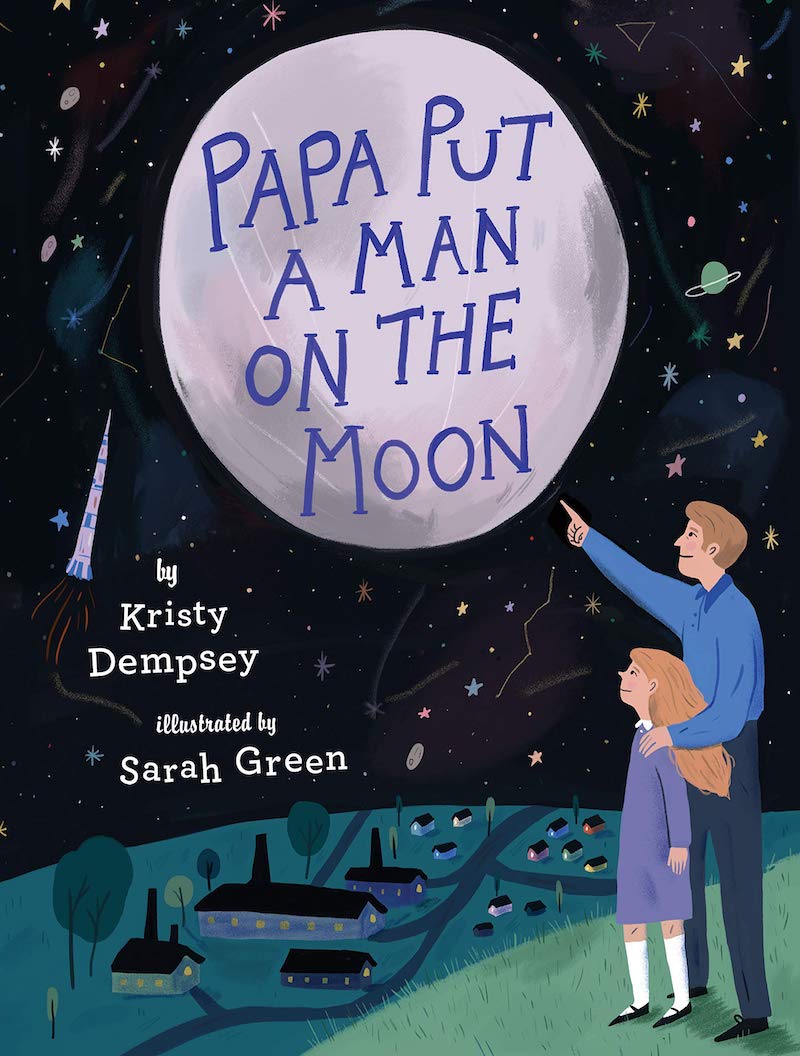 For younger readers interested in real stories about space, Hidden Figures: The True Story of Four Black Women and the Space Race is a perfect place to start.

Is that one already in your library? Then be sure to add Papa Put a Man on the Moon by Kristy Dempsey and Sarah Green. It tells the true story of millworkers in a small town pre-space launch, as they worked hard to create the special fabric used for the astronauts’ space suits. It’s a charming father-daughter story, but also a fascinating glimpse into the many working parts necessary to make the Apollo launch a reality.

Related: The one scene in Hidden Figures we should all be talking about. 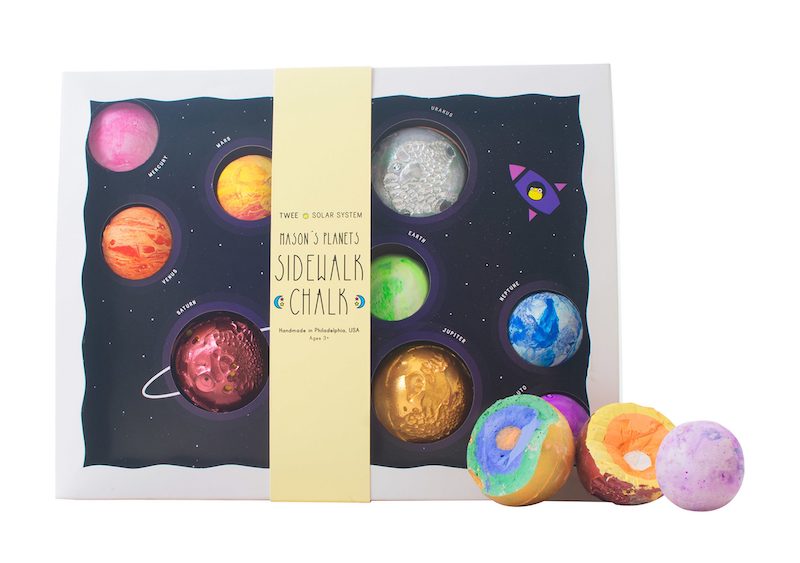 How amazing is this planetary sidewalk chalk collection? The layers and colors are so gorgeous, I’ll be tempted not to let my kids play with them. But I have a feeling that these might cement the planets in their mind more than any educational graphs ever could. 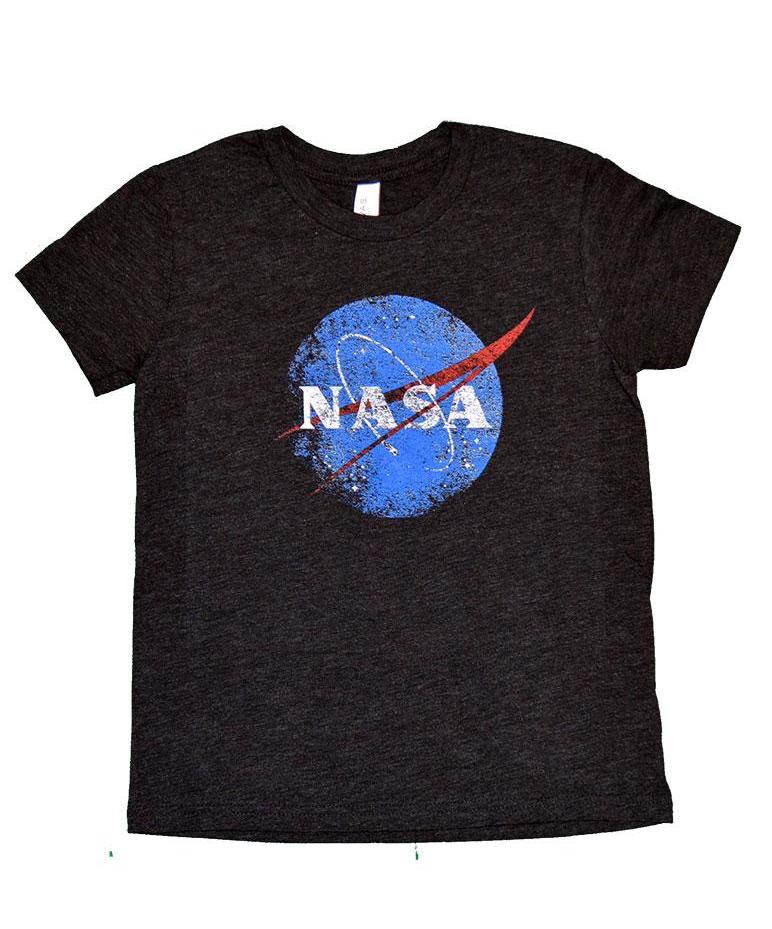 The NASA Shop is always a great place to shop for space themed toys and gifts because, well, it supports NASA. Of course most of their Apollo 11 gifts are sold out (keep checking back) but you can never go wrong with a vintage NASA logo shirt. It also comes in pink and purple but we think this charcoal is vintage perfection. 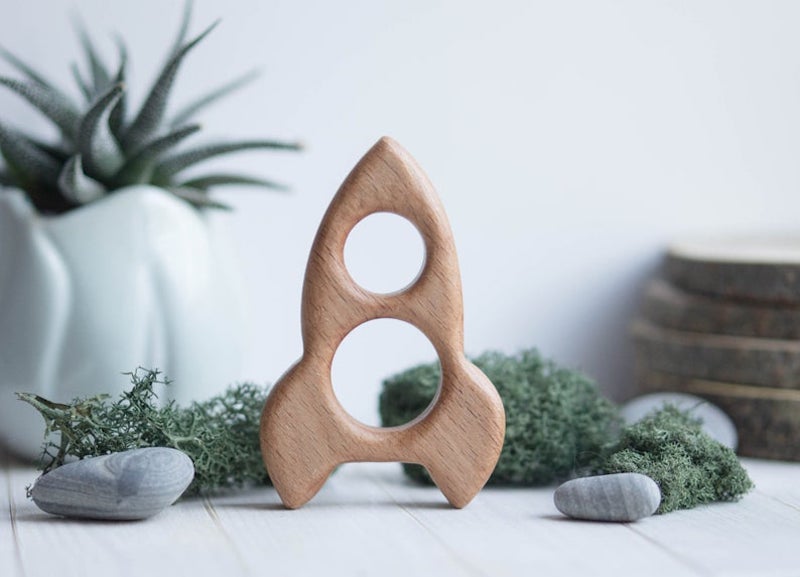 Even tiniest kids can start dreaming of space travel with this gorgeous wooden rocket teether at Tiny Fox Hole. It’s under $10! Plus, you can get it personalized with your child’s name making it a real keepsake gift. 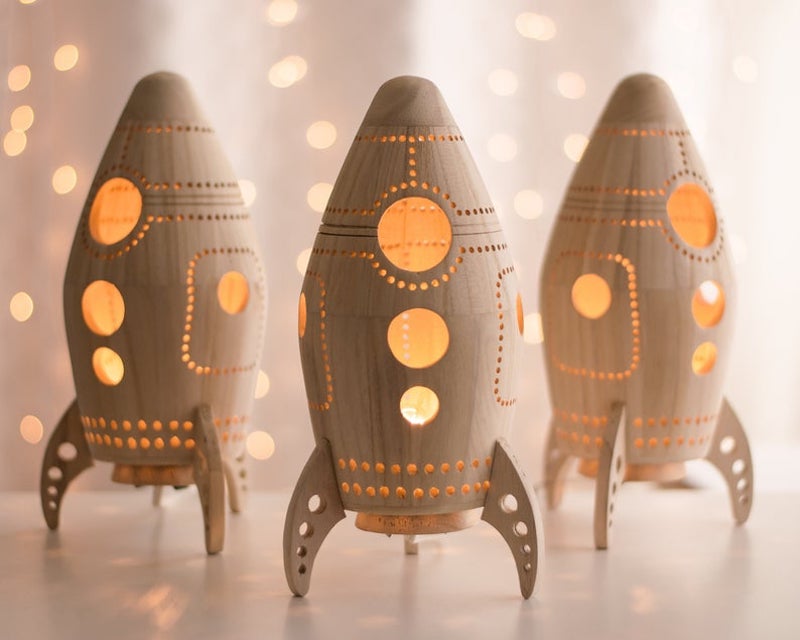 For a kid who eats, breathes, and sleeps everything space, this minimalist rocket ship night light from Lighting by Sara is a fun addition to bedroom decor. She has other rocket-themed lamps too, so be sure to shop around the site before you land on your favorite.

Related: Launch Ladies: A children’s book all about the trailblazing women of space exploration 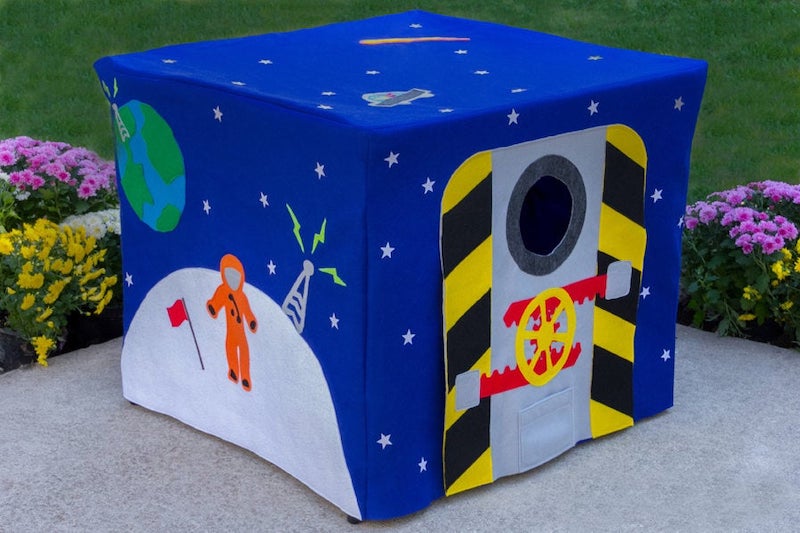 I think the card table playhouses from The Playhouse Kid (formerly Miss Pretty Pretty, for our longtime readers) are so brilliant — just pop them over a card table and you have an instant space ship to the moon! They’re pricey, but totally handmade and beautifully so. This is the kind of toy you’ll keep for your grandkids one day. 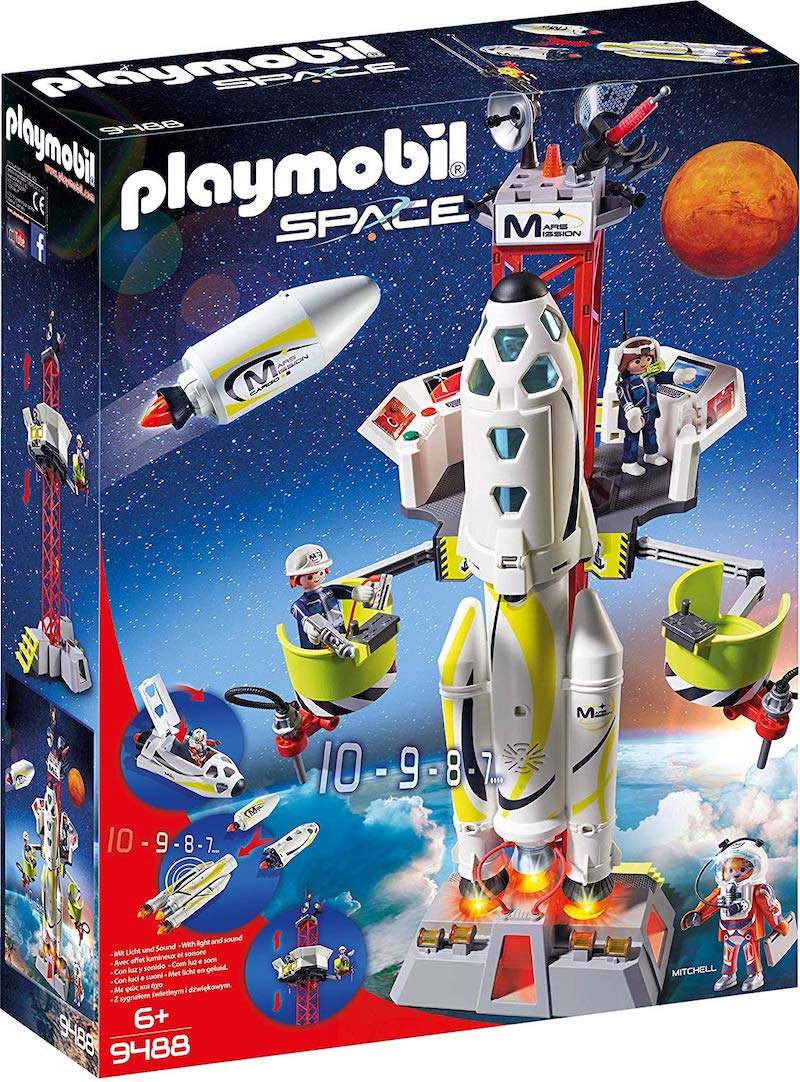 Playmobil sets are still among of my kids’ favorite classic toys, and I can totally picture them imagining themselves as part of the action with their new Mission Rocket with Launch Site set, released to commemorate the moon landing anniversary. Like any good Playmobil set, it comes with approximately a million (okay, 9,488) individual pieces for them to play with — all of which can be added to the Mars space collection to create a whole new civilization in outer space.

Related: The Rocket Science for Babies board book any NASA fan needs in their library 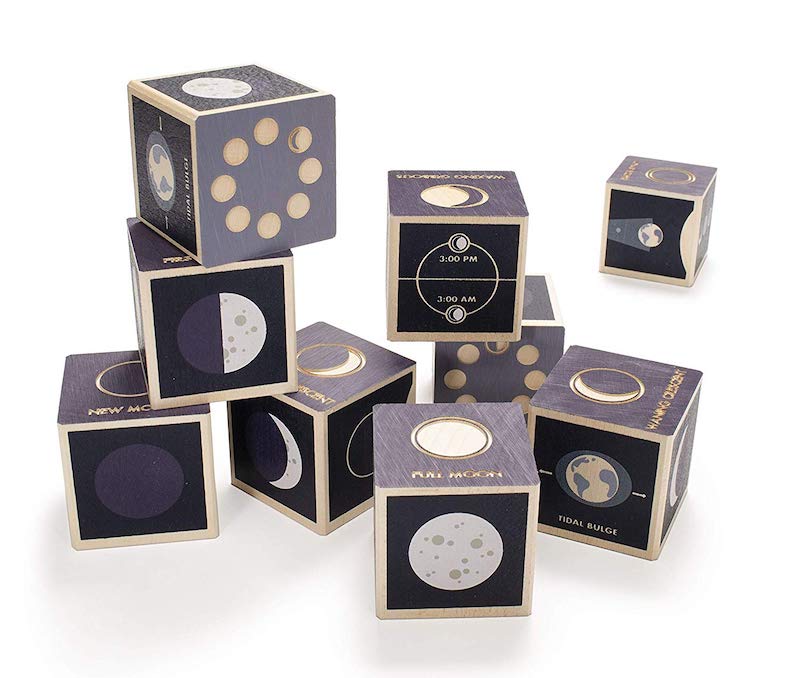 These  Uncle Goose moon phase blocks may be made for the toddler set, but I think even kids in elementary school can learn about tidal bulges, waxing and waning (I can never remember the difference), and other ways the moon changes throughout the month. 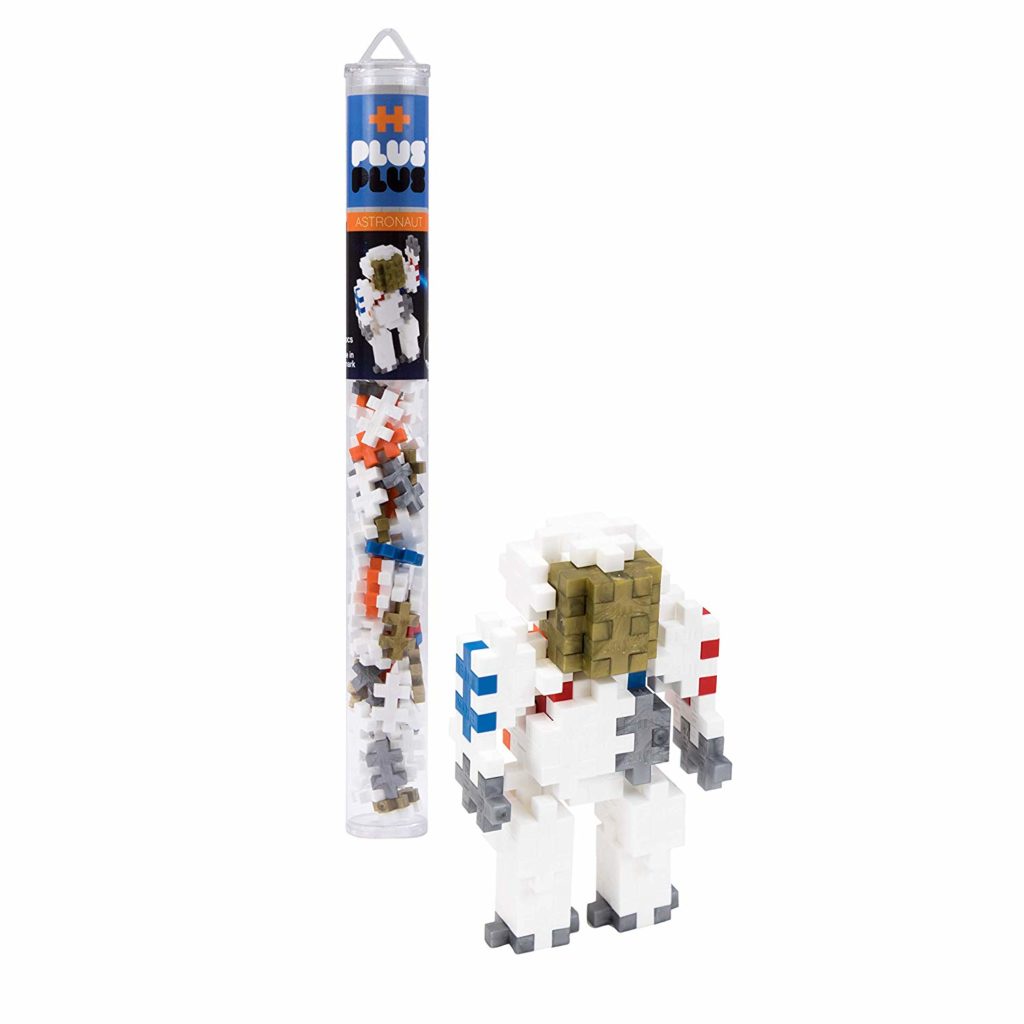 More building toys? Yes! Our tweens are fans of Plus Plus, which offer great little sets of their interlocking 3-D shapes, perfect for travel (if they’re good about keeping the pieces together). They’re out with a few new sets to commemorate the moon landing anniversary, and a favorite is this very affordable $7.99 Plus Plus 70-Piece Astronaut Maker Tube. 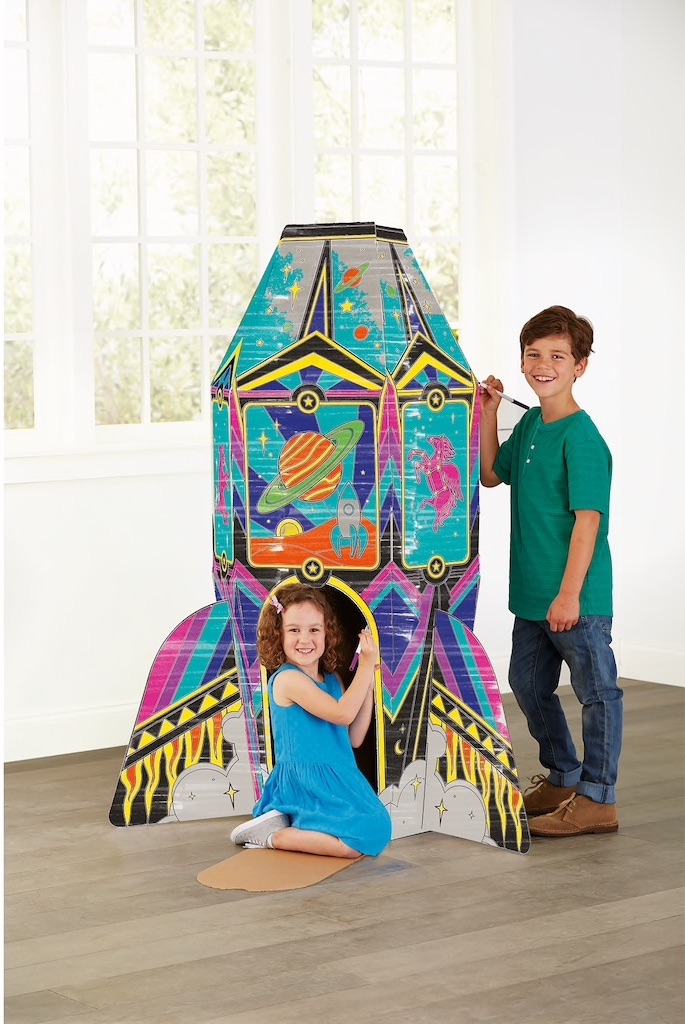 I’m so excited about this cardboard playhouse shaped like a rocket that we found over at Michael’s on clearance for (wait for it…) under $10! Your kids get to color in this blank canvas themselves, which is so fun. And considering we’ve found cardboard rocket playhouses this size in the $100- $200 range, this is a great deal. Just note, since it’s on clearance they’re going to go fast…and when they’re gone, they’re gone.

For a chill $580, you can snag a pair of these vintage Nike Air Max Lunar 90 shoes honoring the 50th anniversary of Neil Armstrong’s moon walk. (Well, the 45th anniversary when they were first released 5 years ago.) For my kids, owning these would be about as realistic as walking on the moon itself, but they are seriously cool.