Mattel launches the first gender-neutral dolls for kids and everything about this is beautiful. 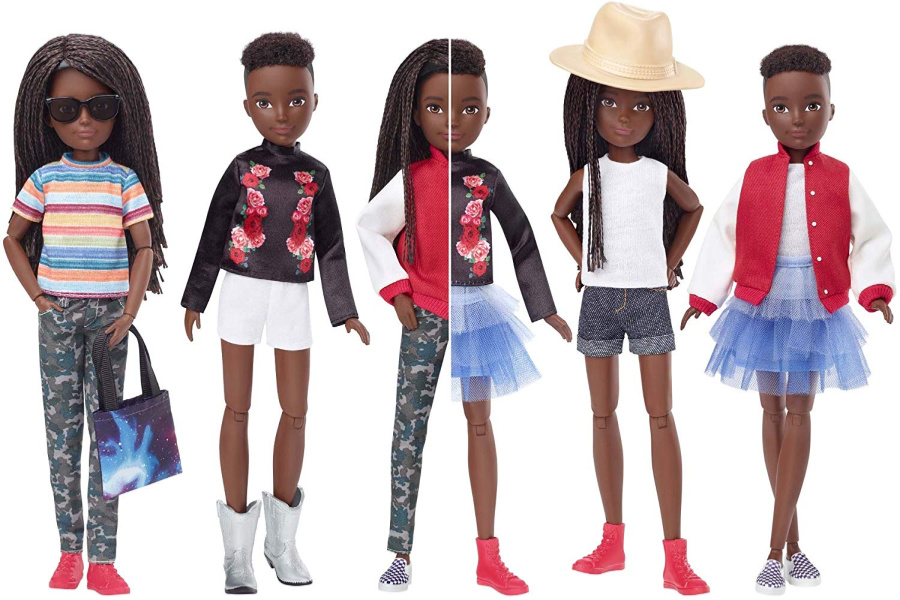 When I read the news last night that Mattel is launching Creatable World, the first gender neutral doll and accessories to put kids in charge of their own play experience I teared up. In part because of the tag line, “All Welcome.” In part because I know how meaningful this will be to so many kids and parents. And in part because I know there will be so much hateful, biggoted backlash from people terrified about all the wrong things.

For years on this site, we’ve been talking about getting rid of the outdated boys toy aisles and girls toy aisles and discussing how boys like baby wearing their dolls, and how a gender-neutral clothing company isn’t “removing gender,” but allowing kids to just be…kids.

And while of course no one freaks out about stuffed animals that have no gender until one is assigned by a child, the idea of a gender-free or gender-neutral doll is going to be A Thing. 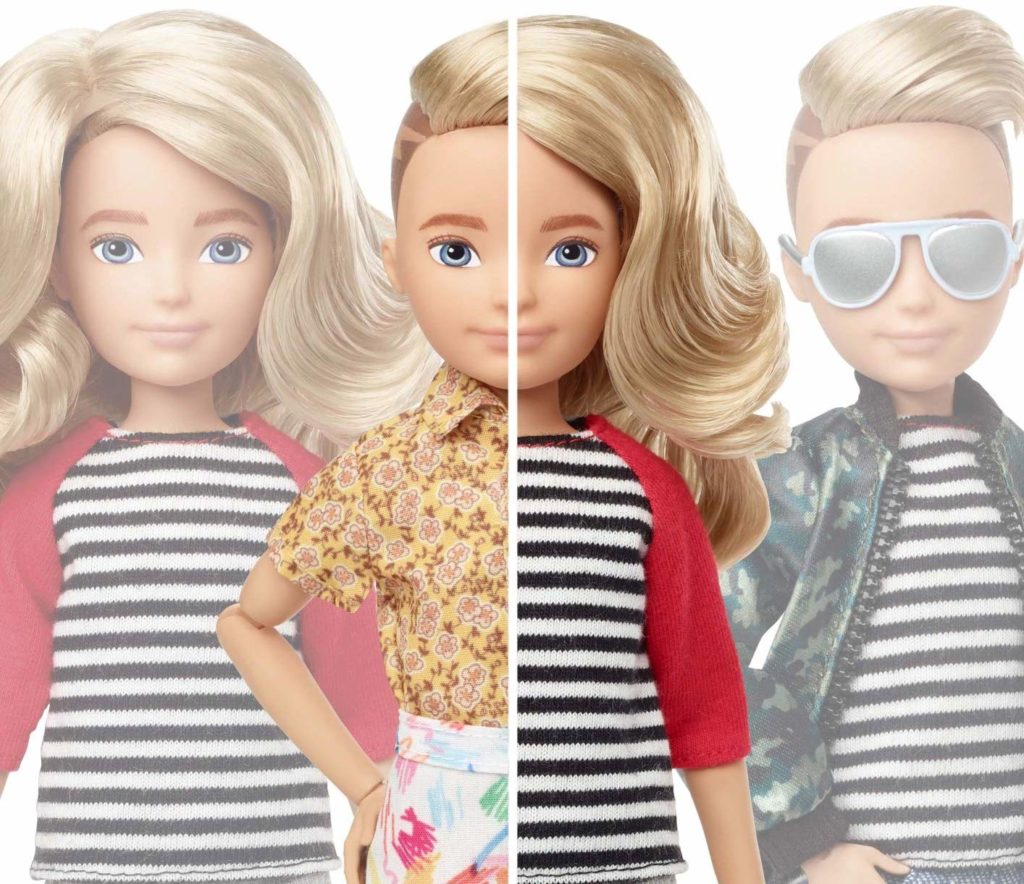 As you probably know, our readers tend to be fairly progressive and open-minded, so the feedback from you on posts like this one will be overwhelmingly positive. But I do admit we’ve deleted our share of pejorative social media comments over the years. They’re generally from the kinds of dudes who don’t actually read our site, and write Facebook posts about how if my newborn son doesn’t grow up to root for the right football team, he’ll be beaten haha j/k I’ll just know he’s not really my son and then I’ll divorce my wife after I beat her too haha.

(You only think I’m exaggerating.)

So now that a massive brand like Mattel is jumping into the world of more inclusive play — at the expense of preserving gender norms and stereotypes we’ve accepted in toys for decades — it’s a big big big big deal.

And yeah, they’ll be responding to a whole lot more troll comments than we’ve ever had to. So I really honor this decision.

Related: The Phluid Project is for everyone who has ever thought that “men’s” and “women’s” departments are limiting.

Eliana Dockterman wrote a comprehensive article in Time that broke the news yesterday, and it lays out the essence of the doll line and why this is the right time for this kind of a launch. She describes that “Generation Alpha, the most diverse generation in America in all senses of the term, is likely to grow up with even more liberal views on gender.”

With that in mind, you can see why Mattel is on a mission to make doll play more inclusive — it’s not just good values, it’s good business.

Because each doll doesn’t have traditional identifiers of gender (I still remember my then three-year-old telling me she always knew if a cartoon animal was a girl because “she has eyelashes”) the dolls can be customized with different kinds of hair in different lengths, and come with enough clothing and accessories to mix and match for more than 100 looks in every kit. 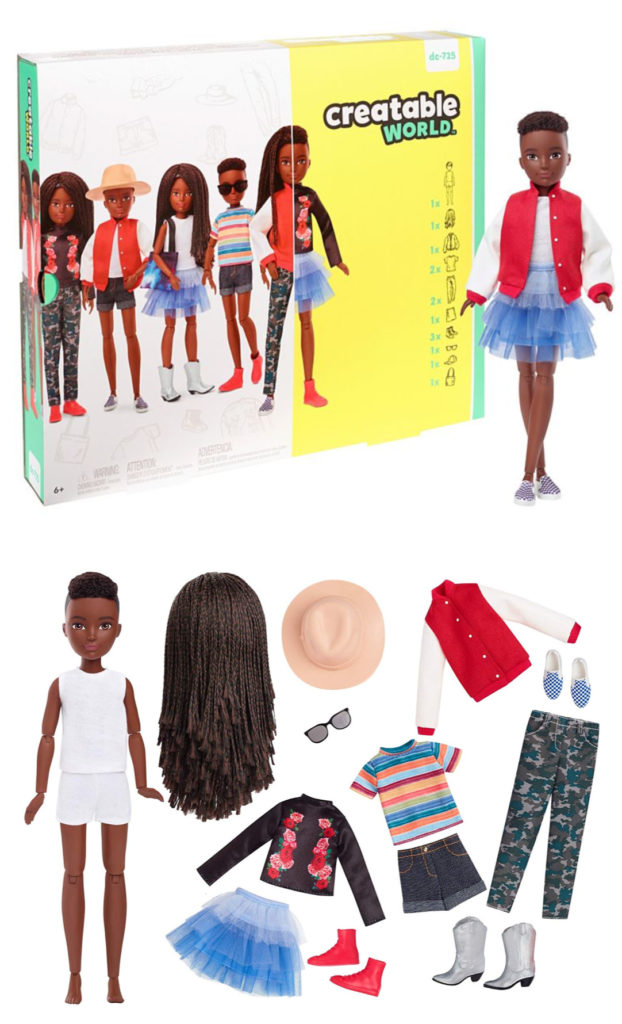 For example, this Create Your World Deluxe Character Kit with Black Braided Hair (available now online from our affiliates Amazon or  Target) includes a Black doll with short, black, curly hair with shaved sides. They’re wearing a simple tank and shorts. In the kit, you’ll find a long wig with back braids, tops, a jacket, shorts, a tutu skirt, and a pair of camouflage pants, plus 3 pairs of shoes and accessories.

I mean, how Billy Porter is that tutu, y’all? 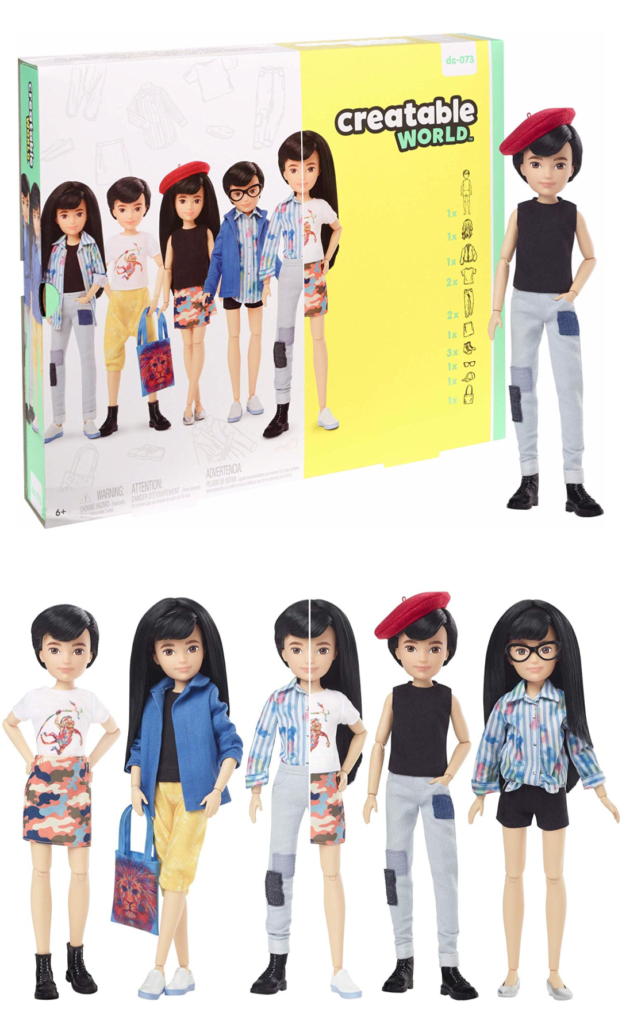 The Creatable World Character Kit with Black Straight Hair (notice they’re defined by the type of hair?) reads more Asian, Latinx, or Caucausian — up to your kid. It also includes a long wig, 6 pieces of doll clothing, plus multiple shoes and accessories.

There are six Creatable World kits in all right now, hitting an array of hair styles and colors so your kid can find one that’s just right for them — or not.

If you’re still trying to figure this all out, here’s another way to look the dolls: They serve as a blank canvas for kids.

Who could be against a blank canvas for any types of play, to help inspire more creativity and imagination in our children?

We’ve always said that if a kid wants to grow up to be a ballerina-architect-paleontologist, we’ll find the books and toys to help encourage that. Well, these kits are a way for kids to play out those kinds of dreams and fantasies, without being held back by any ideas about what girls or boys “should” or “can” be. We’re seeing more and more inclusion in terms of career aspirations for all kids; but I happen to really like that there are no “work clothes” in these Creatable World Kits right now. Just…clothes. For wearing to…whatever. 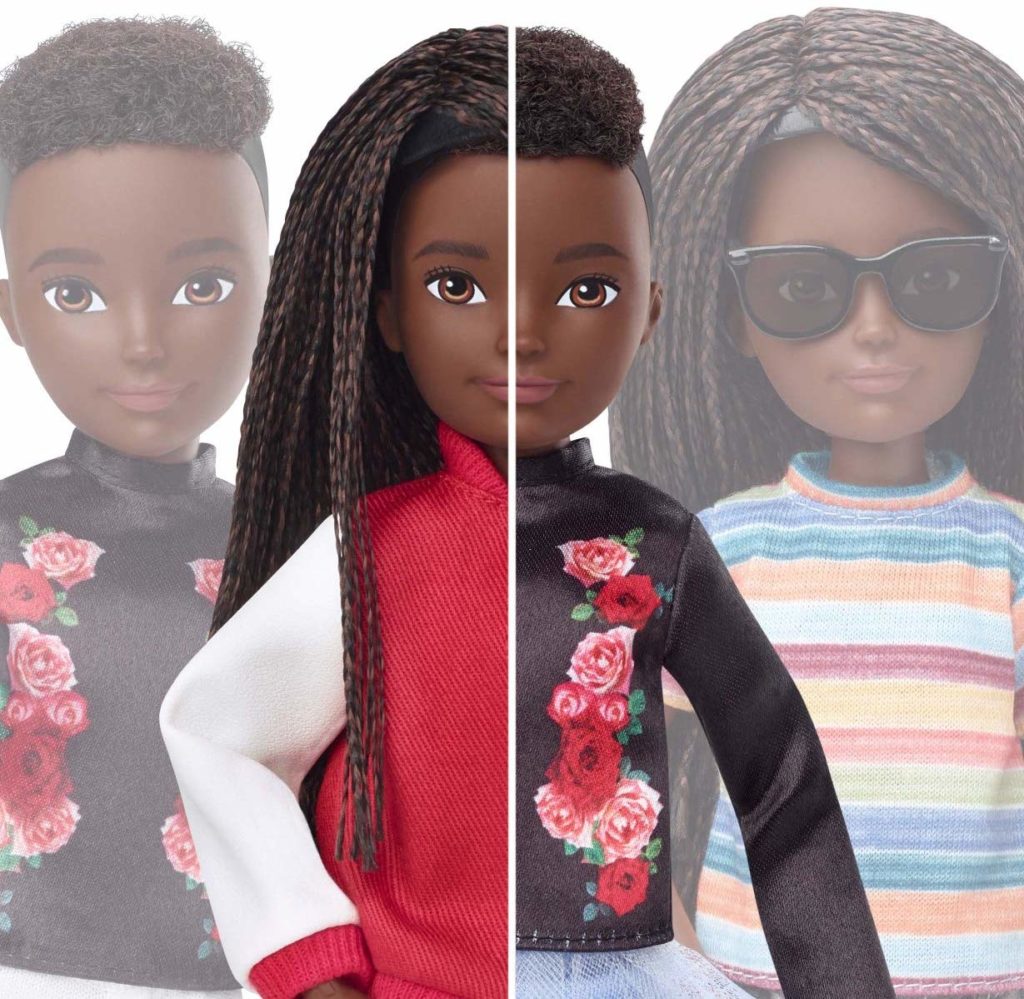 Of course there’s another reason I think this idea is so special and important, and that’s the value it provides to children who are non-gender-conforming or gender fluid or already identify as LGBTQ.

The anecdote in the Time article about 8-year-old Shi’a jumping up and down when he first saw this doll that finally looks and feels more like him than his sister’s dolls reminds us all of how valuable it is for all kids to see themselves reflected back to themselves in culture.

Reading about his response is pure joy. And if I feel that way as someone who doesn’t even know him, imagine how many parents are going to be filled with relief, happiness, and gratitude to find dolls like this for their own kids.

If you’re among the skeptics out there, please keep in mind that dolls and toys won’t turn kids into something they’re not — they help kids figure out who they already are.

And yes, there are eight-year-olds and six-year-olds and even three-year-olds who may not have the language to describe it yet, but they already know that somehow, traditional gender roles and expectations don’t seem to fit. So Mattel really is doing a valuable thing here. 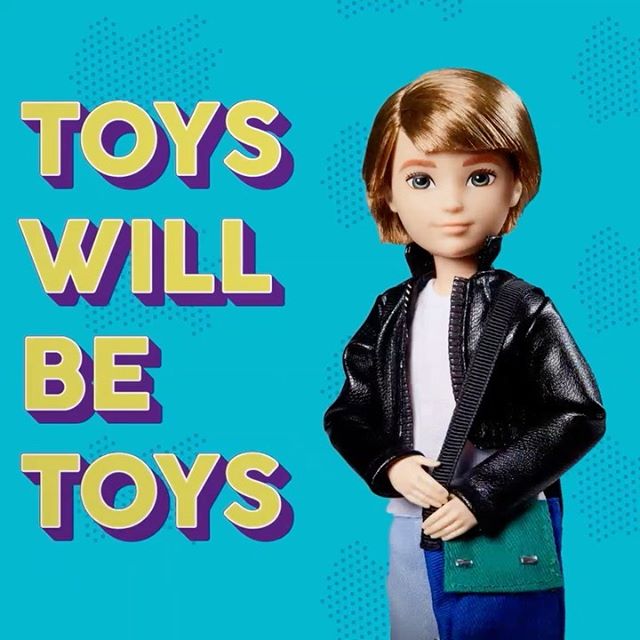 I’m especially encouraged by the quote in the Time article from Lisa McKnight, a Senior VP at Mattel who states that major retailers are also excited about Creatable World and the message of inclusivity/ That means things have come a long way since we started this site in 2006, and the the toy makers at Toy Fair looked at us like we were crazy every time we asked why they only displayed astronaut costumes under a “for boys!” banner, and ballerina teddy bears under signs like “just for girls!”

“The world is becoming a more diverse and inclusive place,” McKnight says about toy retailers, “and some people want to do more to support that.”

One warning though: These dolls aren’t rated as for kids under 6 but we say, use your own judgment. Mainly because you wouldn’t want your toddlers swallowing those darling shoes.