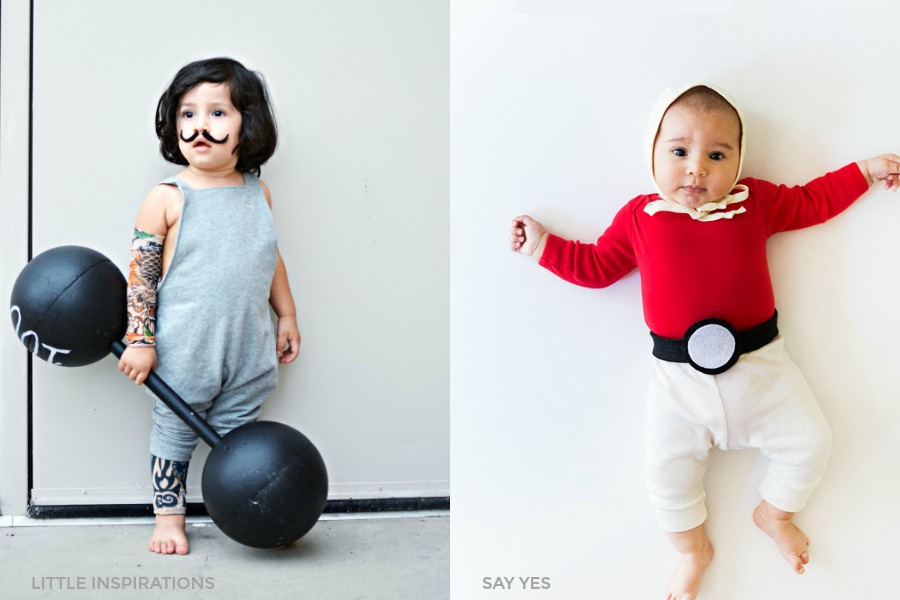 My six-month-old baby can’t eat candy yet, but I’m not above exploiting his cuteness to satisfy my own sweet tooth when we go trick-or-treating. (Kidding. Sort of.) So I’m all for adorable, easy, no-sew Halloween costume ideas for babies that are simple enough for a sleep-deprived, not-so-crafty mom like me to make.

Possibly with one hand.

Luckily, some of our favorite craft and DIY bloggers have risen to the challenge with lots of super easy, no-sew Halloween costumes for babies, toddlers, preschoolers and our littlest kids who aren’t quite dressing like rotting zombies yet.

They look so great you’ll totally deserve all those Reese’s Cups you steal from your kids.

Related: Super easy last-minute Halloween costumes that are ready in 10 minutes or less. 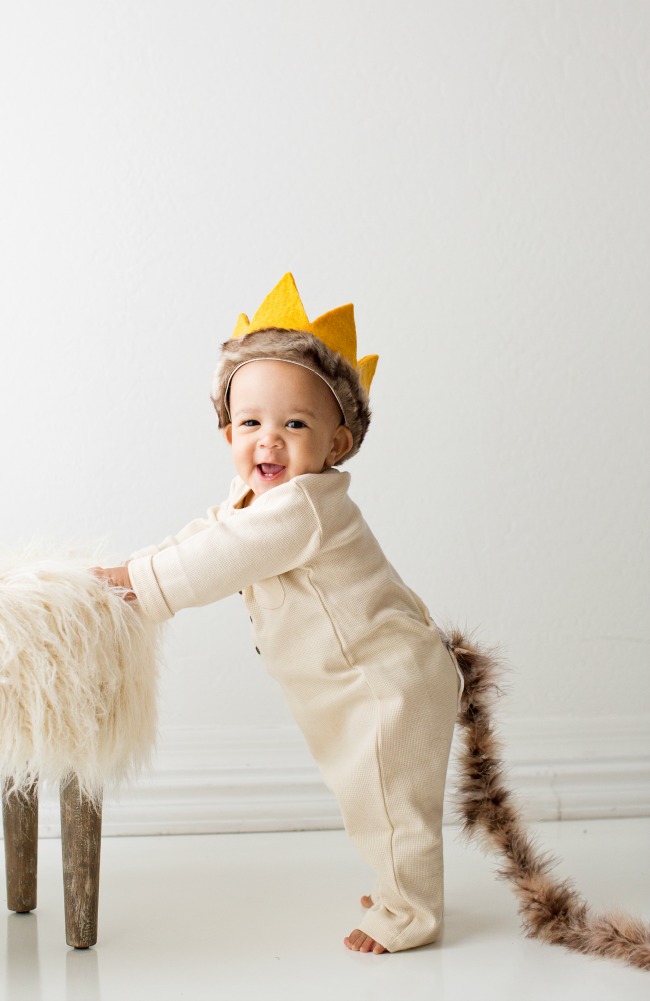 This brilliantly simple no-sew Where the Wild Things Are Costume for babies and toddlers requires only a few items to get the look, but the reference to one of our favorite children’s books is clear. And uh, totally adorable. Check out the full tutorial at A Night Owl Blog. 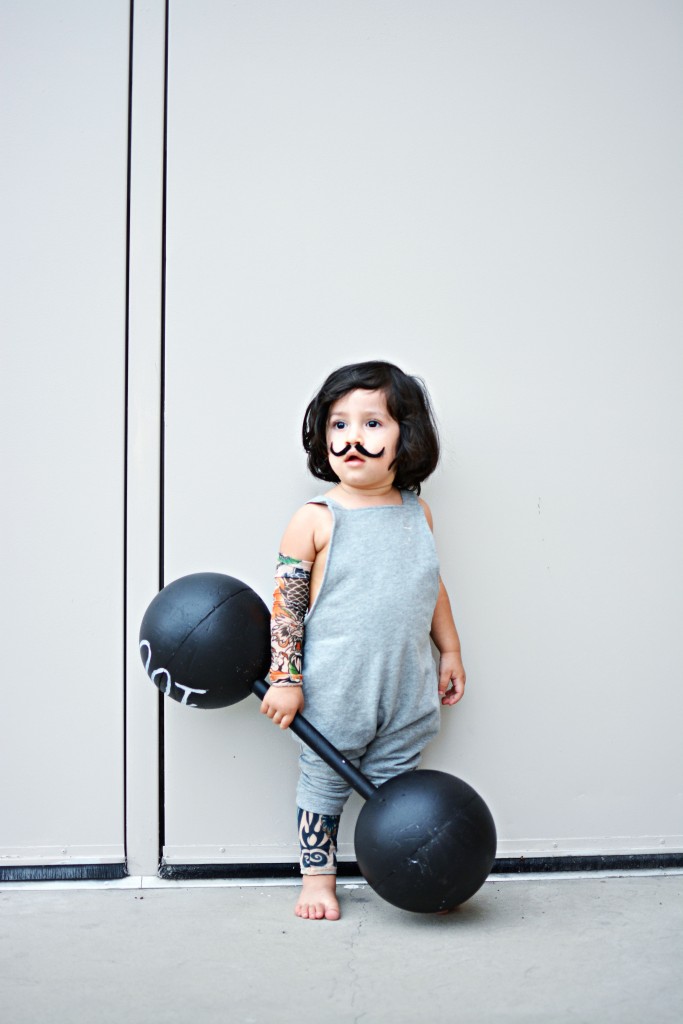 Another one of my favorite baby Halloween costumes made from pajamas, this Easy Circus Strong Man Costume at Little Inspiration comes together so easily! Just add some rad tattoo sleeves or temporary tattoos and a barbell from your home gym. (Okay, I think it’s actually made out of styrofoam, but don’t try to tell this powerful little lady!). strong man. 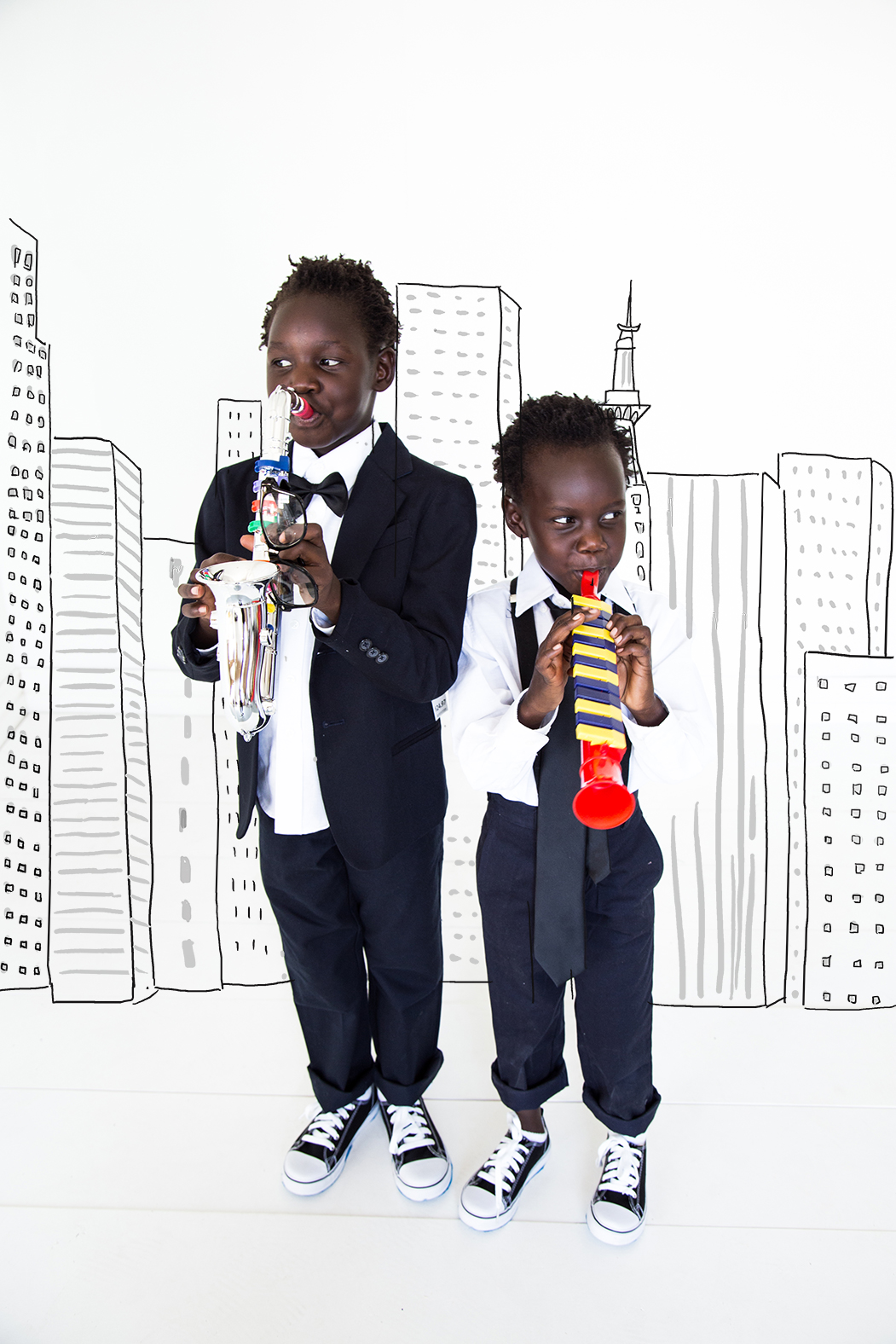 If you’re a fan of the iconic Roots, who I think were amazing long before they became Jimmy Fallon’s Late Night band, you have to check out this handmade baby Roots costume from The House That Lars Built. The hipster game is seriously on point with the sneakers and suits, plus you probably already have a toy instrument lying around. 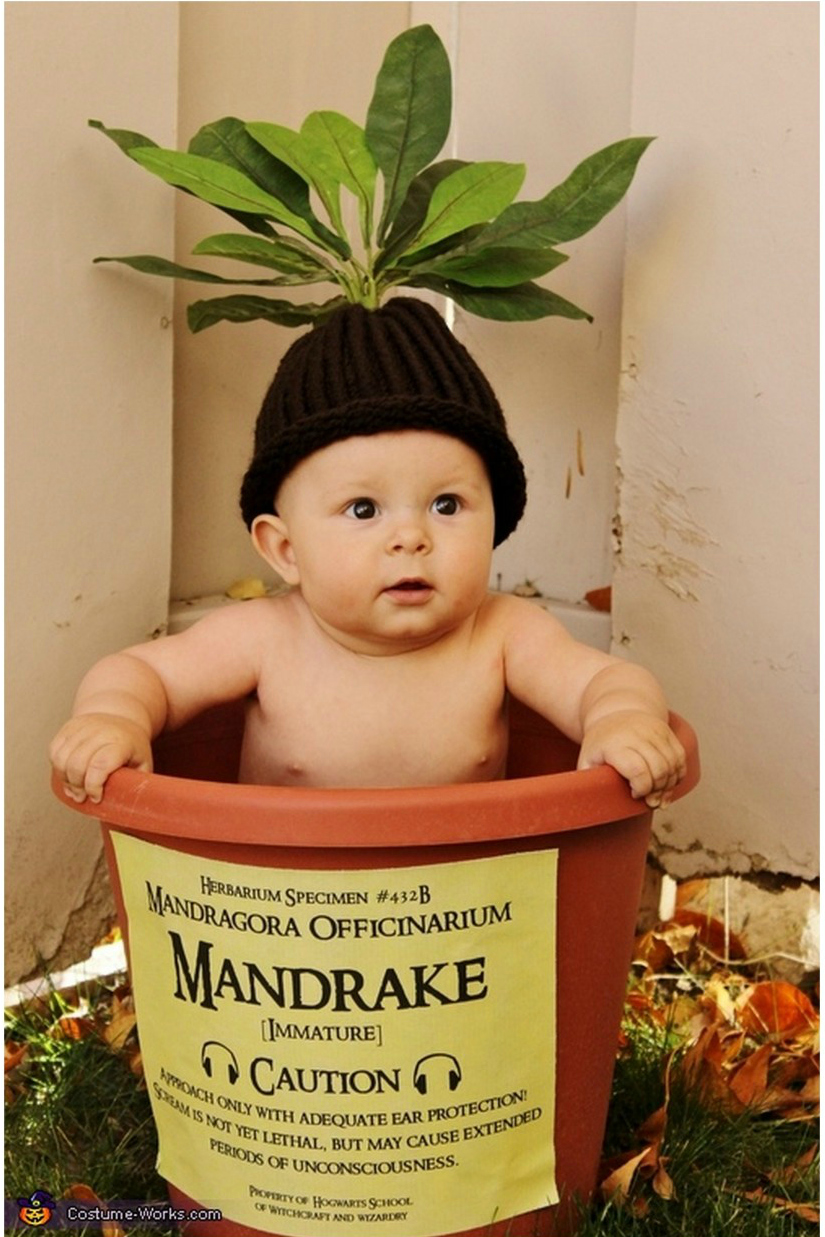 Unfortunately in the Muggle world, baby’s cries don’t put parents to sleep — quite the opposite in fact. But I’m still loving this wildly clever Harry Potter baby mandrake costume, which couldn’t be easier thanks to the free printable available at True Blue Halloween. The best part: you can just pop it right into a stroller or sturdy bassinet and push off. Whoo! Just make sure the weather is appropriate for this one! 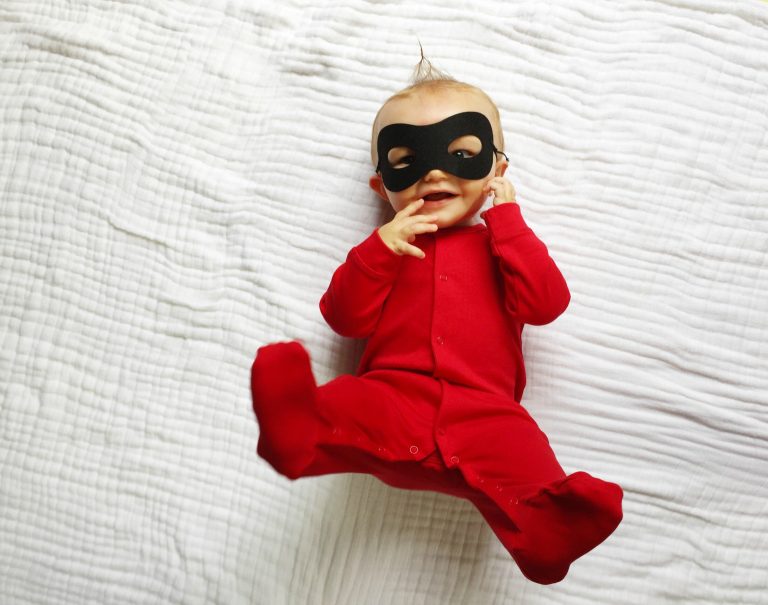 No-Sew Jack from the Incredibles Costume

Last year our editor Kate rounded up 12 great Halloween costume ideas from baby pajamas (brilliant, right?) and this Jack Jack No-Sew Costume from The Chirping Moms still stands out to me as a favorite. Plus, I’m a fan of anything that makes bedtime a little easier for my baby’s inevitable post-trick-or-treating crash. 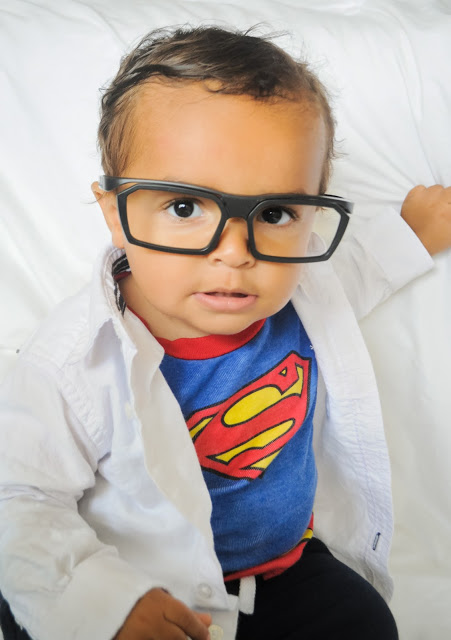 I love that this Super Easy No-Sew Superman Costume from Pretty Real includes a white dress shirt for when your baby decides to keep a low profile–before revealing his true identity when there’s danger (or uh, candy) on the horizon. And yay for another costume that uses pajamas! 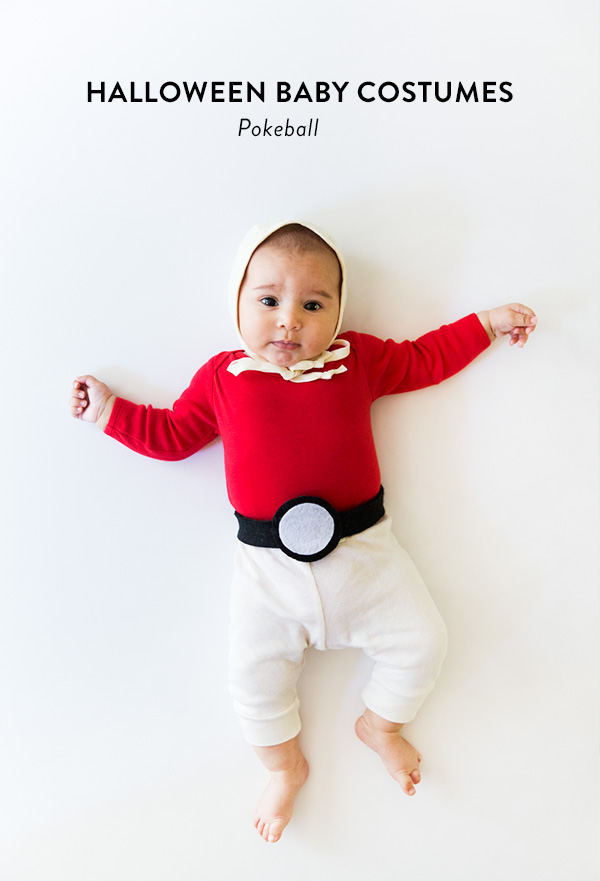 Calling all round, chunky babies! Leave it to Say Yes to once again hit the trends hard with this Pokeball baby costume for you. And happily, her instructions make it crazy easy to put together, for you nerdy parents who want to catch a few Pokemon characters around the neighborhood while they trick-or-treat. 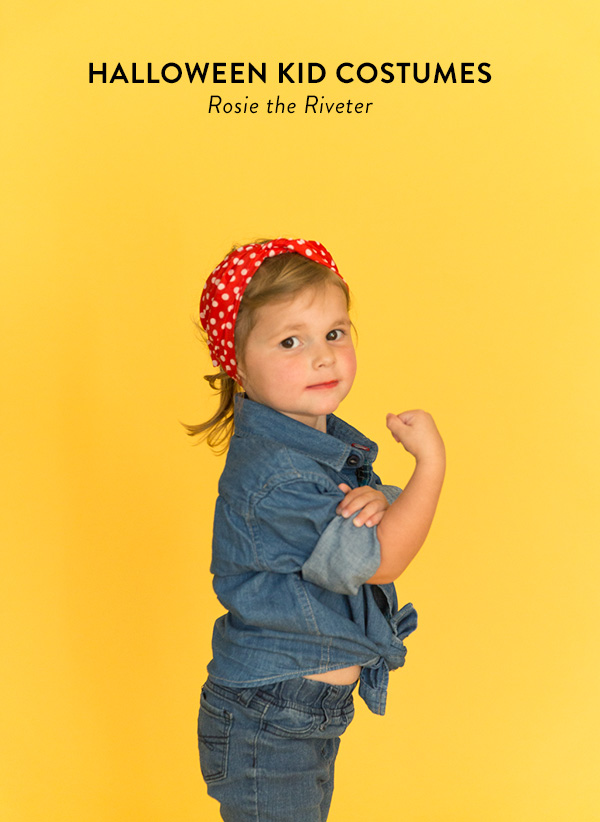 Your kids have chambray shirts lying around, right? Or you’re willing to get one because it can be worn again/ If so, you’re well on your way to this ultra-empowering Rosie the Riveter No-Sew Costume with a how-to to help you get it done at Say Yes. #Feministgoals. Tell your daughter to expect lots of high-fives and fist bumps for this one. 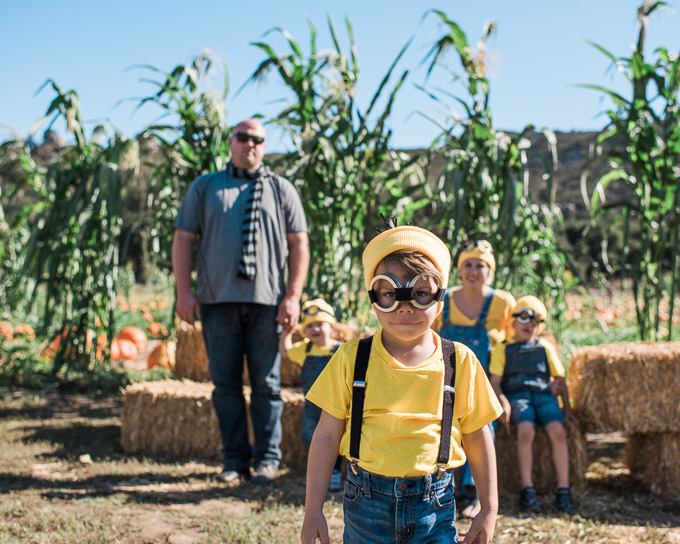 Family costumes are my favorite kind of costumes, and this zany DIY Minion Costume for the whole family is cracking me up. Plus, Chelsea at Someday I’ll Learn recommends some unexpected everyday objects to make the goggles so you don’t have to buy those either. So smart! 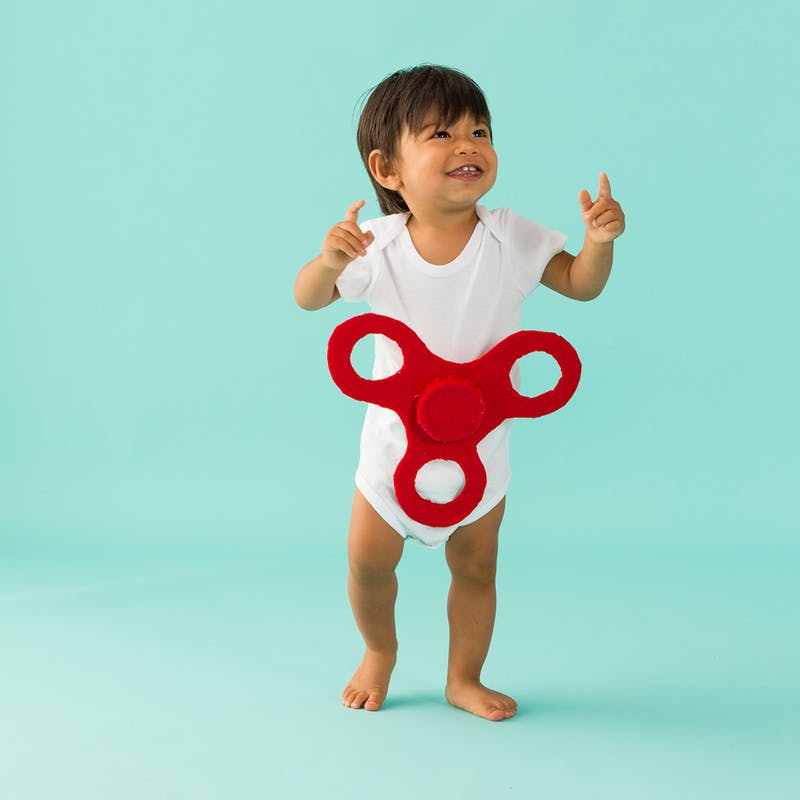 It was impossible to miss the fidget spinner phenomenon, and they’re still all the rage. (No, we don’t fully understand it either). So this Baby Fidget Spinner at Brit Co which we also featured in our roundup of easy, creative costumes for babies made from onesies. seems like the perfect of-the-moment costume for Halloween 2017. Now, if only it had a functional spinner that kept kids entertained, I’d dress my son in this costume all the time. 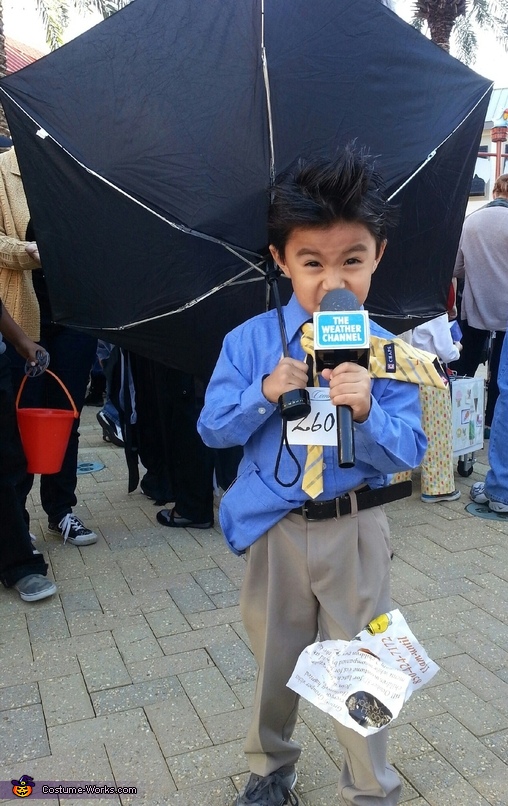 Meteorologists and reporters became our latest heroes this year, when their work reporting on hurricanes turned into lifesaving rescue work. So we love this no-sew Meteorologist Costume (F.K.A. “Weatherman”) at Costume Works. It’s a smart idea in itself, but the attention to detail here–check out the windblown papers and the folded over tie–is pretty incredible. If you have a broken umbrella lying around, you can totally make this costume your own — and easily adapt it for an intrepid female reporter costume, too. 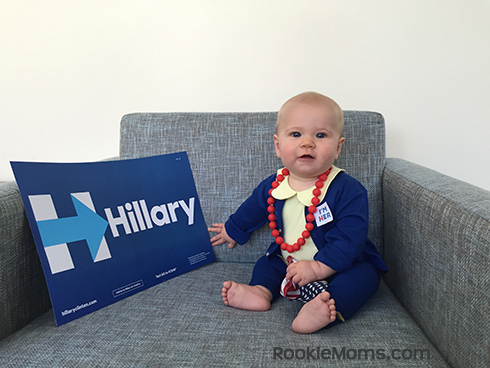 I imagine there will be quite a few little girls who are #stillwithher, sporting a Hillary Clinton costume this year. Thanks to Rookie Moms for making it so easy to recreate this look. We highly recommend baby-safe Chewbeads for that necklace, and if you don’t have a sign, there’s a HRC book or two that you can pick up…if you haven’t heard.

Other related costumes to consider if you’re going political with your daughter: Maxine Waters, Elizabeth Warren, Susan Collins; just be sure add an “It’s Better in Maine” pin for that one. 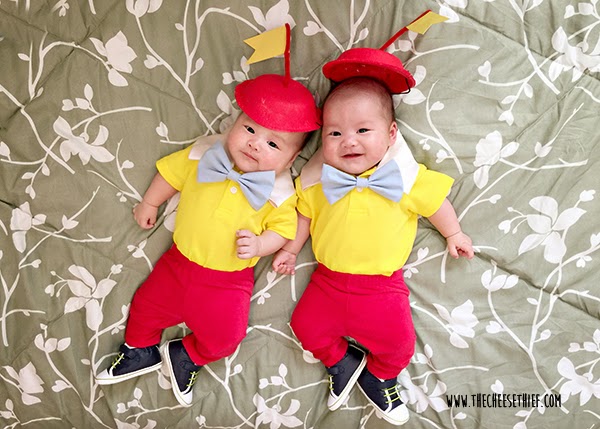 Honestly, this easy Tweedle Dee/Tweedle Dum twins Halloween costume is enough to make me wish I had twins of my own to dress up! The cuteness is. Slaying. Me. Plus, the tutorial from The Cheese Thief is so thorough I think that anyone could manage it. Even parents juggling twins.