In the Heights movie is a celebration of love, dreams, community, family, and the melting pot that makes New York the greatest city in the world 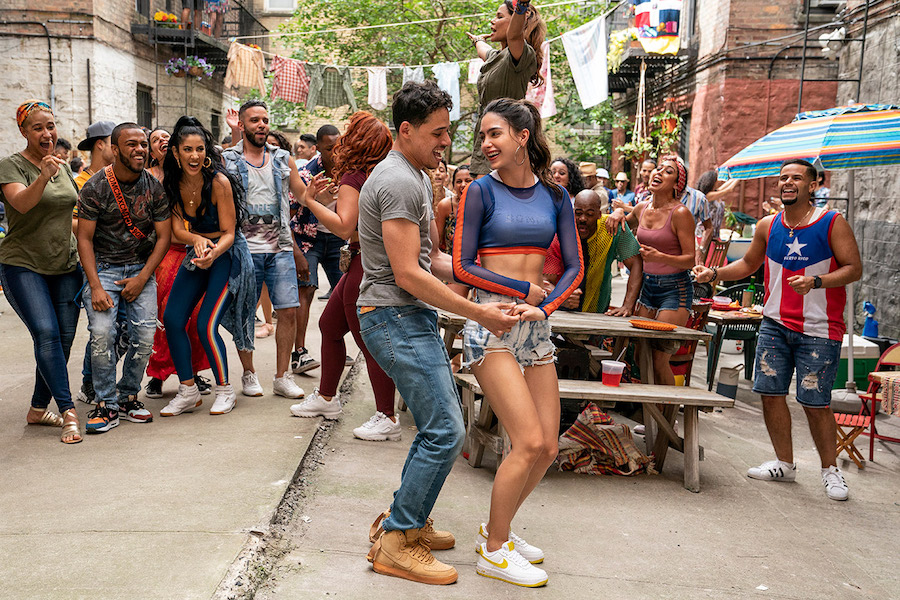 Fair warning: This is not so much a review of the new In the Heights Movie, opening tonight, as it is a love letter.

I am a movie person, as any longtime reader here knows. I’m also a Broadway person, a Lin Manuel person, and a proud native New Yorker. Put them all together, and you basically get a sobbing writer, emotionally overwhelmed by a simple invitation to see a press preview — in an actual theater — of In The Heights.

While we’ve all had That One Thing we missed over the past year, something meaningful but not quite as big as say, “hugs” or “grandparents,” mine has been movies. And I knew this is the first one I wanted to see in a theater.

(In fairness I did try to catch a brunch screening of Singing In The Rain at Alamo Drafthouse, but it was sold out for weeks — should you be wondering how other New Yorkers are feeling about a return to theaters.)

I knew the smell of popcorn, the familiar squish of the not-quite-squishy seats, the sounds of soda slurping would all hit me hard. I wasn’t quite prepared for the feelings as a I rode up the escalator with my girls (and apologies to them to have embarrassed them at this point), only to face a promotional display light up in all its bright, LCD glory. 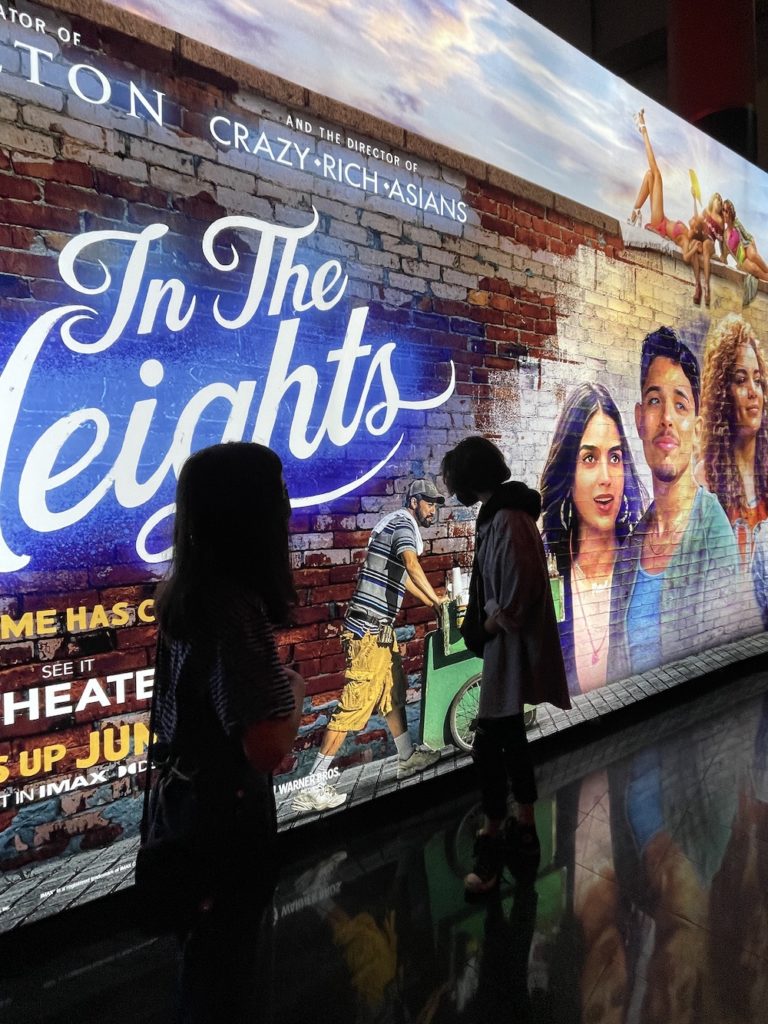 My kids, getting ready to go beyond the wall. © Liz Gumbinner

I’m the kind of person who likes to see movies without reading much about them first, and for those of you like me, who might not be familiar with the original Off-Broadway and Broadway musical, let me provide a no-spoiler, plot-light overview.

It’s a celebration of bodegas and nail salons, of street parties and stoop culture, of sacrifice and hard work, of love and family, and the friends who become your family.

So trust me, when you see it with your kids — and you should — you will have about a million things to discuss afterward. 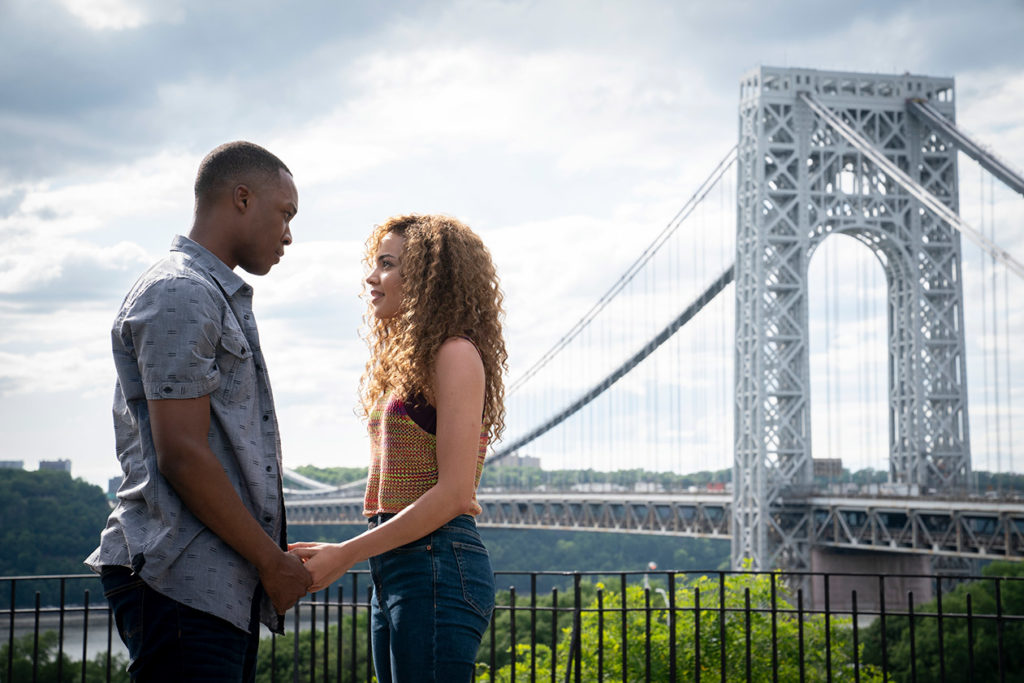 Corey Hawkins as Benny and Leslie Grace as Nina, in front of the GW

A brief note on the exceptional performances: I can’t imagin anyone else playing Usnavy de la Vega than Anthony Ramos, who is best known originating the roles of John Laurens/Phillip in Hamilton. Daphne Rubin-Vega, who I saw as the original Mimi in Rent on Broadway, eats up every scene as Daniela. Jimmy Smits made me sob my first truly ugly cry in a montage about raising his extraordinary daughter Nina as a single dad. (You know you’re getting older when you relate more to the parents than their adult children.) Gregory Diaz is brilliant as Navy’s young cousin and protégée, Sonny.

I really could go on.

Every single cast member is oozing with talent — the romantic leads, the ensemble cast, the Heights residents like Cuca (Dascha Polanco) who steal scenes with single lines or expressions, the thrilling celebrity cameos (no spoilers!) — including Lin-Manuel Miranda himself in a small role as the neighborhood Piragua Man — they are all terrific. But they are even stronger together as a community, bringing to life the neighborhood outside the 181st Street 1 train station “at the top of the world” on the subway map.

And I suppose that’s the entire point. 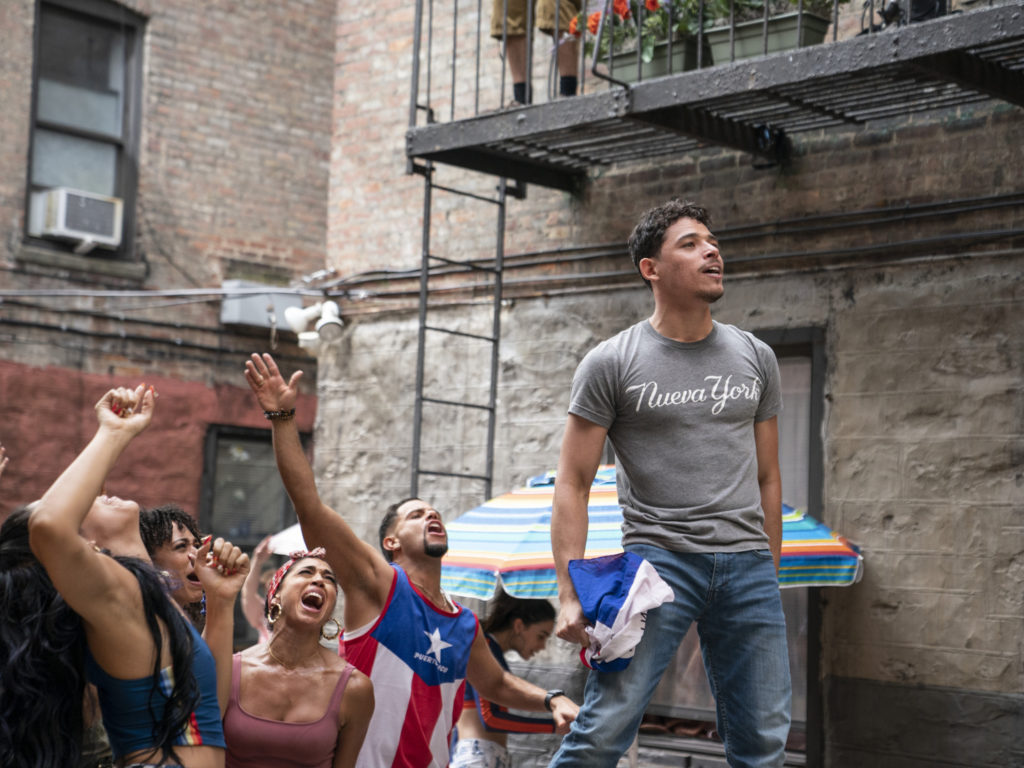 Please see this in the theater, if you’re able to do so. Not just for the popcorn and the A/C.

In fact, I don’t think I could have watched In the Heights at home in my living room over the Christmas holidays, like so many other big releases. It would have hurt too much to see a New York from another era, to see hugs we couldn’t have, parks full of laughing kids, people dancing in the streets as spontaneous expressions of joy.

But now? New York is back, In the Heights is out on the big screen, and one just makes you so happy for the other. It’s almost as if the timing were meant to be this way all along.

Oh, except for one ironic detail: The 181st station is currently closed for repairs.

See In the Heights Movie in theaters beginning June 10, 2021, and for a limited 31-day run on HBO Max with subscription. It’s rated PG-13, but I wouldn’t hesitate to bring a kid of any age. It would be a pretty cool way to celebrate July 4 and remind us of the promise that America holds for all immigrants.

Also note that every theater showing the film has committed to strict CinemaSafe health and safety protocols.  This doesn’t include the ability to add extra, extra, extra butter topping to your popcorn like we did.