Cool Wonder Woman gifts that boys and men will love too. 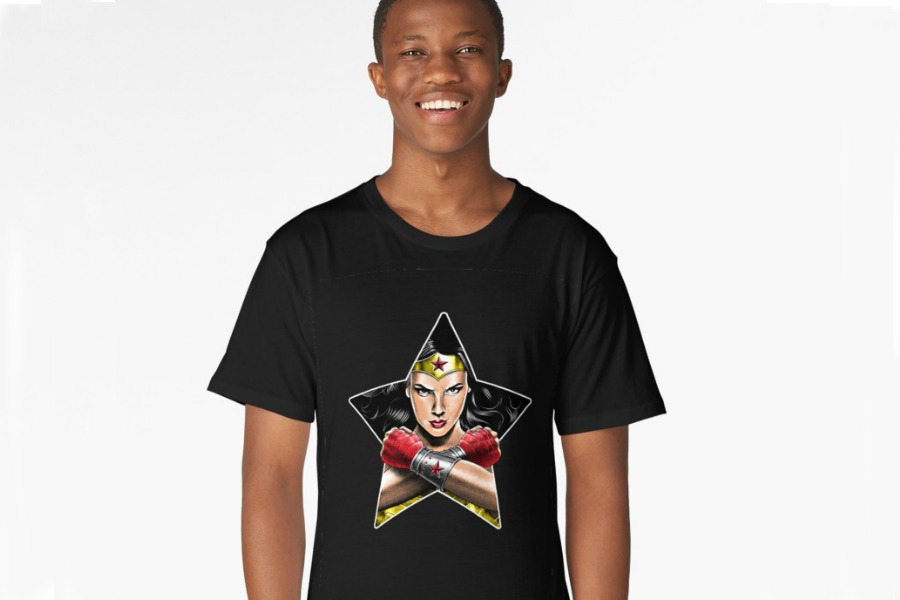 Wonder Woman — let alone an exclusive all-female screening of the Patty Jenkins-directed Wonder Woman movie — does not frighten the boys and men in my life, and for that I am grateful. I mean, what kid wouldn’t want to look up to a badass superhero who’s a natural born athlete, fighter, and can bench press 15,000 pounds? And that was before she earned the bracelets.

Not to mention that iconic magic lasso which so many of us coveted as kids.

Related: 13 amazing superhero gifts for girls who can (and will) do anything

Or hey, get the Havaianas, if you can still find them. They’re pretty great.

While there are tons of Wonder Woman t-shirts out there, I happen to love this clean, bold design shown at top, featuring Diana flaunting those amazing, bullet-deflecting bracelets. It comes in sizes and styles to suit fans of any age and sex — maybe a cool daddy-and-me gift for Father’s Day?

Wonder Woman: The Art and Making of the Film by Sharon Gosling ($25 on sale, Amazon)

For anyone who wants to geek out over the concept art, set design, costume sketches and storyboards from the Wonder Woman film — plus commentary from the cast and crew — I bet that Sharon Gosling’s official movie companion book will have a happy home on your coffee table.

The retro comic version of Wonder Woman will be a big hit for fans of the comic — or soon-to-be fans. Bring on the French cuffs.

Cubist Wonder iPhone Case ($28 and up on sale, Ian King for Society 6)

Who better to protect your precious tech than the fiercest Amazon warrior princess anywhere? Love this graphic depiction of the classic Wonder Woman.

I had to include one more Wonder Woman tee out there because wow, this one is amazing! Fantastic depiction of Gal Gadot in her amazing film performance with that uber trendy sublimated tee style that turns the entire shirt into the canvas.

This collection a great Wonder Woman gift for new fans who want to know more about the superheroine. It features more than 400 pages of the best Wonder Woman stories through multiple redesigns, right up to her 21st century adventures.

Based on Gal Gadot’s arse-kicking depiction of her in Wonder Woman movie, we shared the news about the new Mattel action figures earlier this year and yes, they’re finally here! If you collect action figures, make sure you grab a few: You’ll find Diana in training gear, a mortal disguise, and fantastic battle armor. To round out the collection check out the majestic horses, Queen Hippolyta, and a miniature version of Chris Pine as Steve Trevor.