What you can and CAN’T wear to the polls: Don’t get turned away on Election Day! 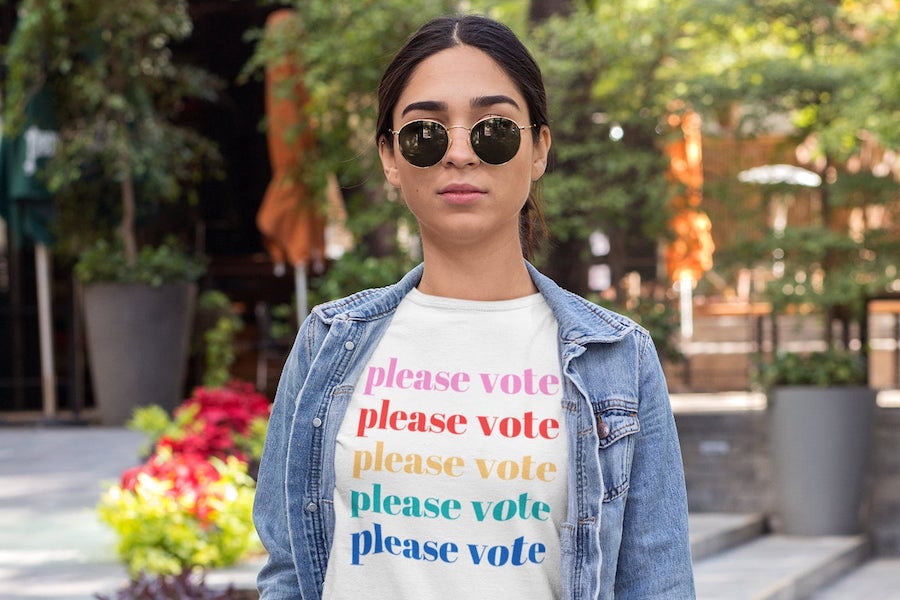 I’m in several politically-minded Facebook groups, and lately, the women there have been asking what everyone is planning to wear to the polls this year so we can identify each other. Some said they’ll be in all blue, others will be wearing their RBG earrings, and still others have planned to wear shirts with political messages like Resist! on them.

While I love the desire for camaraderie on Election Day, I’m also cognizant of the fact that there are specific laws about what you can and can’t wear to the polls, and the wrong choice can cause problems. To help you out, here’s some guidance.

At top: This Please Vote shirt by Self Love Club Team sends a generic, non-partisan message to vote, making it a safer bet for the polls.

What’s the issue with wearing political clothing to the polls?

In most states, wearing apparel or accessories that support a candidate, party or even a specific political issue within a certain radius from a voting location is considered “electioneering,” and can be enough reason to turn you away from the polls.

So while we love our RBG tees and believe political messages like Families Belong Together or Black Lives Matter are critically important, wearing items that promote those ideas while voting could be more detrimental than helpful to you.

The ACLU states this very clearly, calling out “campaign clothing, buttons or stickers.” These rules go back more than 100 years, and were not designed to stifle your free speech but to allow it; clothing and button bans are designed to prevent anyone from feeling intimidated at the polls, and to protect your privacy.

However electioneering laws in states, like Minnesota, have been challenged for using vague or ambiguous language, and have even gone all the way up to the Supreme Court. All of which is to say that it’s better to be safe than sorry when choosing what to wear. 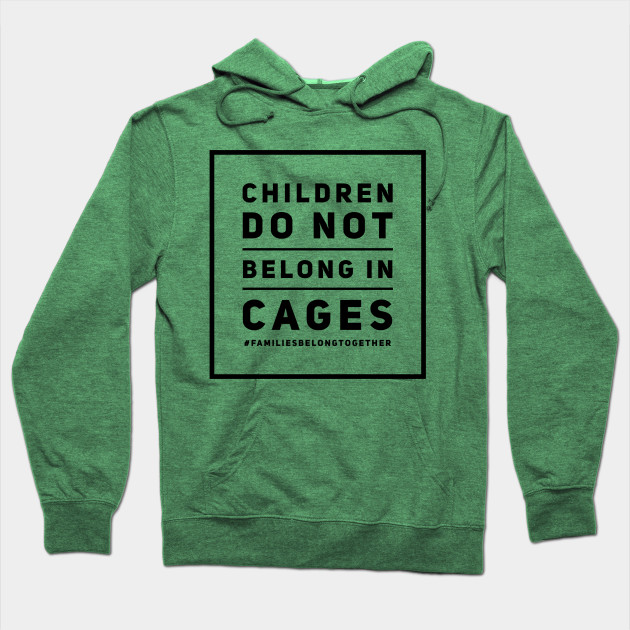 This #FamiliesBelongTogether hoodie supports the Young Center for Immigrant Children’s Rights. It’s a fantastic message, but could get you turned away from the polls because it addresses the issue of family separation at the border.

How do you know what you can and can’t wear to the polls?

Elections and election laws are run by states, not the federal government. To know exactly what is or isn’t allowed, check your specific state’s rules by calling your Secretary of State’s office or checking their website, like Michigan.gov or TX.us.  Don’t take a friend’s word for it in another state — each one varies. Wildly.

In ten states — California, Delaware, Kansas, Montana, New Jersey, New York, South Carolina, and Tennessee — the law explicitly says you cannot wear anything that advocates for a candidate, party, or (and here’s the big one) an issue, within a certain distance from a polling location.

In New Mexico however, you can advocate for a particular politician if they are not on the ballot.

In California, you can wear a shirt that disparages a political party, because the restrictions there are limited to advocating for or against a specific candidate or issue on that day’s ballot.

In Maryland, you can actually “wear a campaign or t-shirt when you vote,” provided you don’t linger around when you’re through.

In New Hampshire, one woman voted topless after being asked to remove her pro-McCain/anti-Trump shirt in this year’s primary.

(The poll workers thankfully didn’t call the police, they just laughed about it.)

What can they do to me if I’m wearing an issue-related t-shirt or mask? 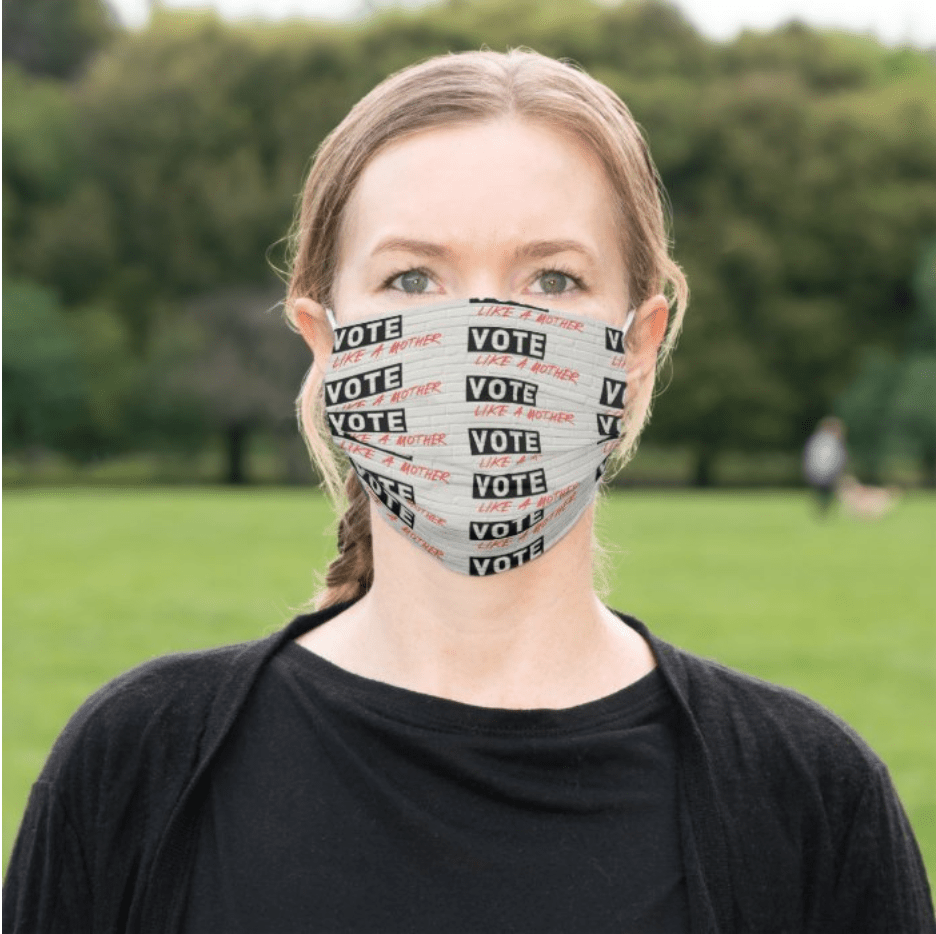 We love the apparel and masks from Vote Like a Mother that support great causes, too.

It’s important to know your rights, and for that reason, you may want to print out any guidance or statutes from your state office.

For example, on the Texas SoS website, it states

If a voter is wearing a face mask that qualifies as electioneering for or against any candidate, measure, or political party, the election judge may ask the voter to place a cover over the mask or provide the voter with a disposable face mask to be worn over the electioneering mask while within the 100-foot zone described in Sections 61.003 and 85.036.

In other words, the penalty is generally that you may not enter the polling place until you cover up the item — the penalty is not banning you from voting.

To repeat: No one can ban you from voting.

They can only request a change of clothing or a cover-up — and potentially fine you, if state laws allow.

However in today’s heated climate, I highly suggest you do not take risks. You could end up at the polls after waiting hours in a long line, only to be asked to go to the back of the line and start over. Is this legal? Probably not.  But there are a lot of stories about voters being turned away for dubious reasons, and you don’t want to be one of them.

Oh, and if you live in New Hampshire? You may have to pay a $1000 fine if you violate the state laws about what you can wear to the polls. Just one more reason to err on the side of caution.

What you can wear to the polls: A simple list of do’s and don’ts 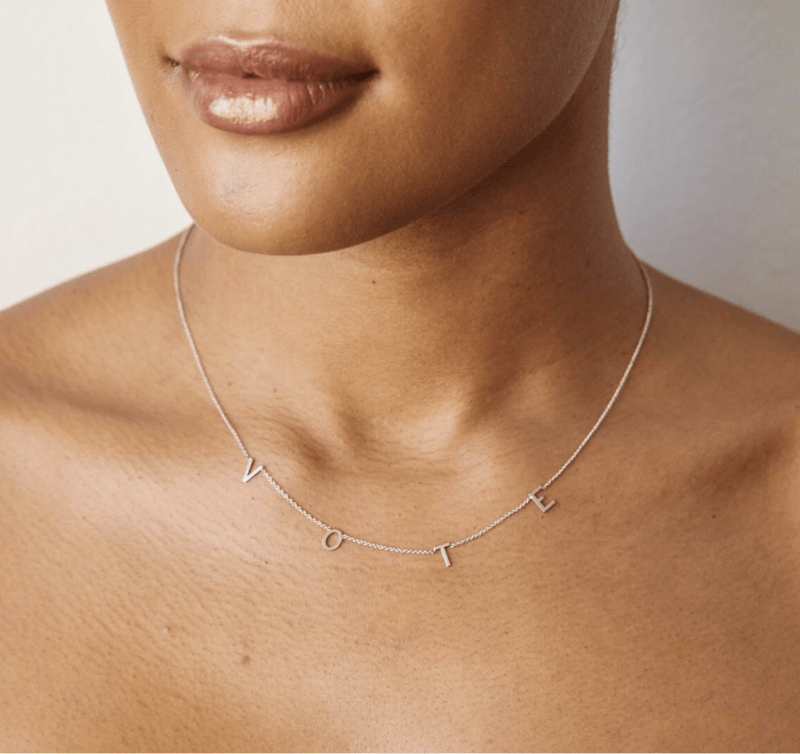 Do not wear campaign t-shirts, issue-related accessories or party-affiliated gear. Leave your “Mamas for Kamala” sweatshirt, your lucky donkey tie, or your “vote for LGBTQ rights” pin at home. Save those for after you’ve cast your ballot. You can however wear blue, wear red, wear a rainbow cap, or wear a green shirt with a tree on it, since they are not explicitly advocating for any issue. Some women wear all white to honor the suffragettes, and that’s fine too.

Do bring a cover-up, if  you want to wear political garb on November 3. If you are determined to wear your #nastywoman tee around town on Election Day remember to bring something to put on over top so that it’s not showing while you’re on line or voting.

Do wear garb that promotes non-partisan civic engagement. There are no laws about wearing gear that promotes involvement in the process, or general patriotic sentiments — like a mask that says Vote or an American flag t-shirt. However avoid anything that points to one party or issue.

Do cover any political tattoos. Don’t forget about any slogans on your body that may be more permanent! If you’ve inked your body in honor of your favorite politician or cause, wear something that can cover it up. If you have a Nevertheless She Persisted tat (and good for you!) I would still cover it up just in case. There’s no reason to take chances or to risk an argument as you enter your polling place. It’s not worth it.

Do wear whatever you want when you vote by mail. One more benefit to voting by mail or depositing your absentee or vote-from-home ballot in a dropbox at your Board of Elections: You can wear whatever you’d like when you walk to the mail box.